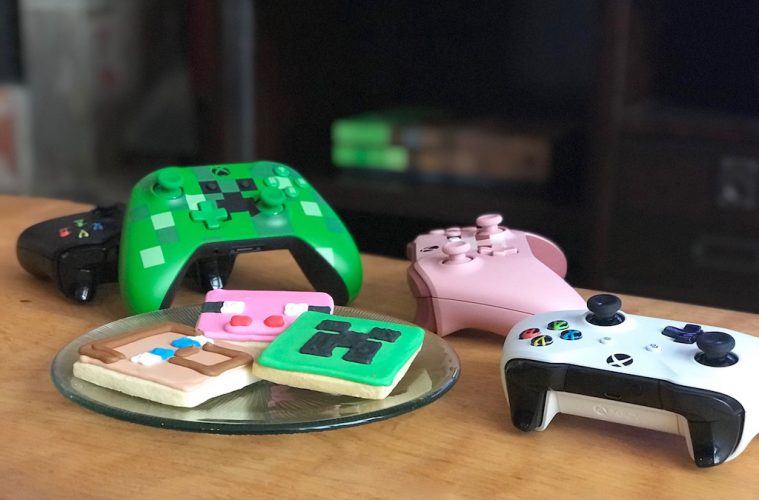 Video Games for every level

Video games offer an escape from the everyday, and that’s exactly what’s required after two years of groundhog-day-at-home. From boredom-busting family adventure screen scrolling to single-player shoot ups, video games not only help you blow off steam but can also improve memory, hand-eye coordination and reduce stress. Plus, there are bragging rights. With Twitch you can gather an audience, and most gaming consoles also offer connectivity too, so you can still be the Luigi to your nephew’s Mario, even from afar.

Here are a few favourite games we’re addicted to.

The affordably fun Rain or Your Parade for Nintendo Switch, Steam and Xbox situates you as a menacing cloud with a bad attitude as you meander your way through wrecking picnics, weddings, a re-enactment of The Office and, arguably my favourite, a recreation of Goldeneye on N64. Make it rain with 50 levels to torment and tease, no matter the weather. As the game progresses, so does your evil avatar, who morphs and collects more weapons than just rain. Easy, fast levels make it good for anyone 8+. From Unbound Creations.

Gone are the gold cartridge dates of my youth, Legend of Zelda: Breath of the Wild breathes new life to this iconic franchise. Immersive quests or free play offer charming gameplay to the tune of an uplifting and enchanting soundtrack, with whimsical art and cinematography selling an already good storyline, picking up in Hyrule where your boy Link is back at it again.

When everything else seems to be collapsing in real-time, seize control with the classic SimCity. The EA title has a slew of sequels but stick to your favourite, mine happens to exist in 8-bit format of an old PC game, and in my town, I’m the mayor who builds and destroys at will. Harness the awesome power of Godzilla? Don’t mind if I do! More seasoned gamers may prefer the stunning options and endless gameplay of Minecraft too though.

You’d have to be living under a rock if you missed Nintendo’s Animal Crossing: New Horizons, but then, you could always take out your shovel, smash the rock and that would only be part of the fun. This popular title has been around for many iterations, and now with a newly released Happy Home Paradise DLC (paid downloadable content) the game goes all Property Brothers on us with countless options for designing not only your crash pad, but everyone else’s in town too.

Can’t keep a beat, well who the hell cares in this keep-it-to-yourself-virtual reality game where you keep to the beat (or not) during some fun-electro Tron-esque tunes. Amped up energy and turbo-charged levels bring the heat, literally, you will break a sweat with this intense game. Scope out Beat Saber on Oculus Rift and look for expansion packs with your favourite artists, like Lady Gaga and Billie Eilish.

KEEP IT IN THE FAMILY

Are you an idiot sandwich? Find out playing Overcooked 2 by Ghost Town Games. In this cooking conquest, your avatar (Swedish Chef!) is challenged to deliver when countless Karens threaten to walk out of your restaurant. Playing cooperatively with your bubble brings time management and other friendly-fire to the forefront, so consider who you play with before you hit start. You will get bossy on this ride!

I’d argue that the Wii U version is still my go-to favourite (who can resist Party Phil in his prime) but I still celebrate the entire collection of Mario Party. With mini-games and dazzling star-stealing opportunities, this easy to play and easier to pick up game levels the playing field with a board game style arrangement, flanked with your favourite Nintendo characters. A bonus round at the end is infuriating as it is unfair, so you never really know who wins until it’s over.

FOR SPORTY AND COMPETITIVE TYPES

Did you know there’s an online Monopoly game you can play right now, with friends? It’s true, and there’s no way you can cheat either! Nintendo is home to a banker-less board game that releases your inner top hat to build houses and humiliate your housemates, is there any greater pastime?

Hockey heads will always buy the latest version of NHL, and Xbox delivers with this year’s 22 with big Papi AM34 deservedly taking the cover spot, again. Unite and challenge friends near and far, and dole out the usual snipes, fights and more to dazzle and derail even your most stalwart bestie. This year, don your best ladies gear as women’s teams were FINALLY added to the fold.

Let us know in the comments below, what’s your favourite video game?