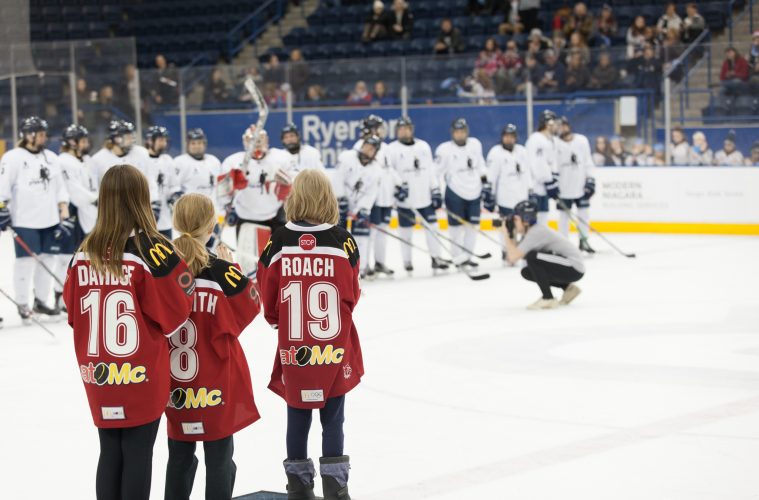 The Chosen One: Molson’s Hall of Fan

Inspiration comes in many forms. For me, it was the summer of 1992 and although I never had the opportunity to play team sports growing up, I finally felt like I was part of a team. That team, for those who missed it, was THE season to remember. The year Toronto had a parade for the Maple Leafs (even though they didn’t win a trophy). The fever ripped through me, I was a life-long fan, cheering for Doug Gilmour, screaming at Wayne Gretzky (I forgave him) and started my life long obsession with the greatest game ever. Hockey.

Fast forward a few years, I’m still a Leafs fan, of course. I bleed blue and white, I delight in the Habs losing almost as much as I love seeing the Leafs win. But more importantly, I’m inspiring the next generation to not only cheer but play too. I see the difference being part of a team has on your development as a person, so when my daughters turned ten, they were faced with the same challenge: Join a team sport, or one will randomly be assigned to you (it wasn’t ever going to be random, FYI). Even though rinks were foreign to me, (if I couldn’t play I certainly couldn’t afford to go to a Leafs game) I knew that they would find their footing on the ice. Fast forward five years, my eldest is a brick-wall goalie for a U18 team, my youngest a defensive beast on the blue for her U13, and I, finally, have also found my place, as a trainer for her team, on the ice every practice and helping young girls fall in love with the same sport that I did 30 years earlier.

Money is what separates a lot of us from being able to play sport. But it never stopped me from being a fan. This winter, in my favourite 93 jersey I’ll be screaming at home, sometimes from Scotiabank Arena and always for my girls who now are of course my favourite players. If you think your fandom story tops this one, then join me in entering Molson’s Leafs Hall of Fan (or if you are an Oilers or Habs fan I guess you can enter too). Winners receive the braggiest bragging rights, a banner, with your name on it, raised to the rafters in an on-ice ceremony. A panel of alumni and current roster members will be selecting the winners, so go ahead and share on socials and tag your fave players, current and former.

Contest closes November 15th at noon EST- get all the details and enter your story here: www.molsonhalloffan.ca/MapleLeafs