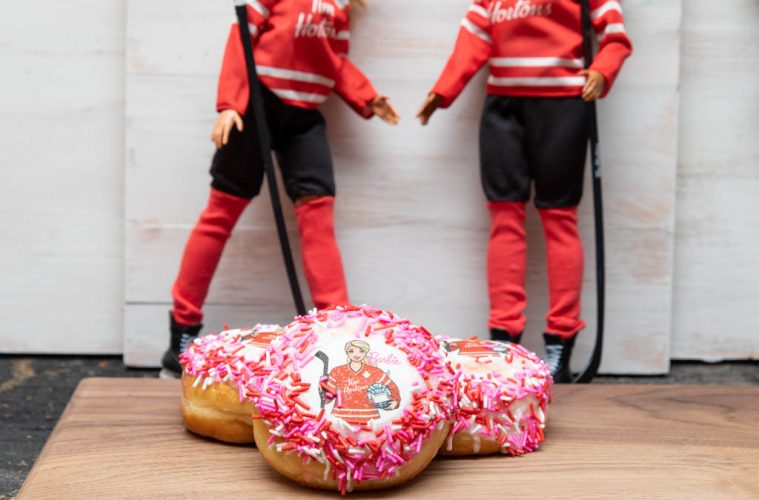 A double-double and a donut are two familiar words uttered at your local Timmy’s, but Barbie? That’s a new menu item. While the donut empire has long celebrated hockey, with cards and more up for grabs every year, the Barbie venture marks a first for the chain, looking to make a dent in the “Dream Gap“, the age in which girls reside themselves to merely existing as a girl, instead of competing, and winning as one.

With girls limited in opportunities for sport, The Dream Gap, from PWHPA aims at not only inspiring young girls to get into hockey but is working on the foundation of making it a viable career. For dudes, you’re an instant millionaire when you’re drafted into the NHL. For women, the money isn’t there, yet. While corporate sponsorship is stepping up, amid COVID chaos it’s reaching a breaking point.

Stepping in to bring this deplorable inequality back to the forefront, Marie-Philip Poulin and Sarah Nurse have loaned their likeness in support of the Dream Gap and the future of girls’ hockey. Both are hockey goddesses, playing for Team Canada and bringing back the highest hockey hardware- so why are we still engrained to cheer for our regional hometeam, and not at the highest altar of hockey, at their feet, instead of some smelly boys?

I attended a PWHPA game this year, just ahead of COVID closures. The rink was rowdy, packed the rafters with my atom hockey squad. They didn’t realize these women were marginalized and not making much money. They just witnessed them play, and wanted to be them. I guess that’s a good start.

Pick up your Barbie today at Tim Horton’s for $29.99 and follow, cheer, and be there. #ForTheGame #EqualSweat #WomensMovementNeverStops