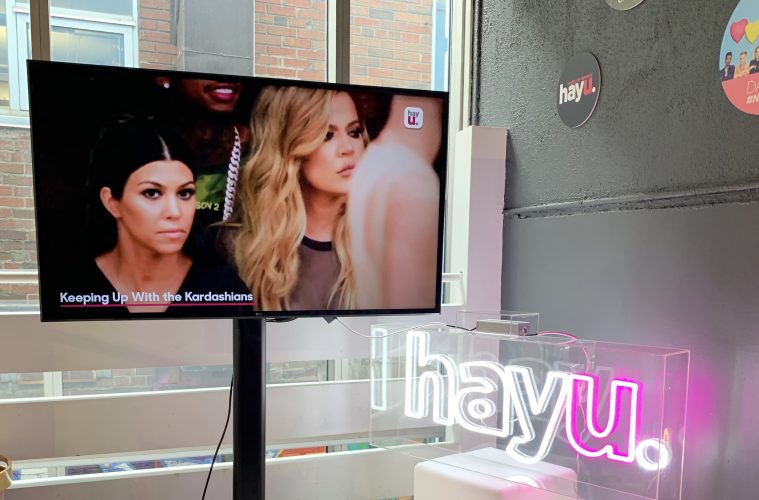 You can get your Reality Show fix 24/7 with hayu

Do you remember your first reality show fixation? I remember being in Boston stuck in a hotel room on a rainy night ordering in room service. While flipping the channels I came across two shows: Rachel Zoe Project and yes, the Kardashians.  It’s pretty wild to think how far we’ve come in this genre of reality TV. Now you can watch anything from living and working a cruise ship to home renovations to the everyday lives of a group of Japanese college students living in a house in Hawaii to Kendall Jenner working the Fashion Week runways. Okay, not too challenging on our brains, really. But that’s okay. The shows are entertaining and sometimes we just need that!

At a recent Essentials Lounge 10 TIFF event hosted by EGPR, I discovered hayu – an on-demand reality tv  streaming service that is the answer to all those who love the unscripted genre. Think of it as the Netflix of Reality TV….all day, every day, anywhere you want. Seriously, on your commute to work, at the gym, waiting at the doctor’s office, in the line at TIFF, at the hockey rink, or even away on that tropical island escape sipping on your margherita.

hayu launched in Canada October 2019 following its success in the UK, Ireland, Australia, Norway, Sweden, Finland and Denmark.  There are over 300 reality shows on its roster including The Real Housewives, Keeping Up with the Kardashians, and Million Dollar Listing franchises. 750 new episodes are added each year.

While you can take in the latest episodes as they happen, you’re also able to back track and catch up on previous seasons. Even better, you can download episodes (while on wifi) on your devices to watch on the go without having to use up your data.

The no-contract subscription-based app allow fans to access the service on multiple devices including phones, tablets, web, and cast to connect to smart TVs.

Subscription to hayu is $5.99 per month. Pass the popcorn this way! For more information visit www.hayu.com – BTW, it looks like the first month is free when you sign up!