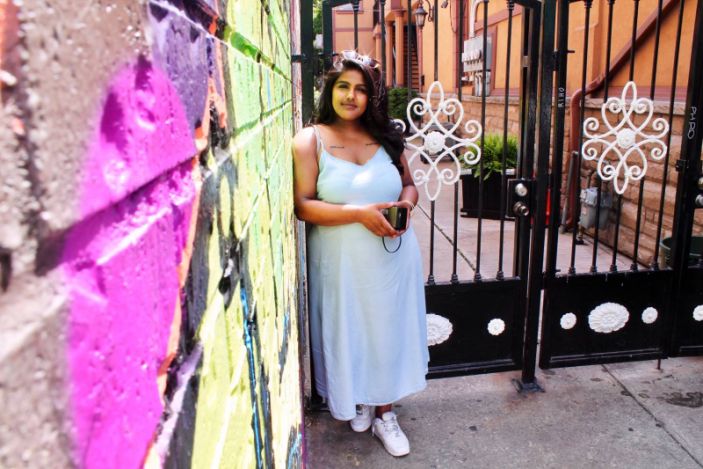 V.T. Nayani is a director, producer, and writer for the screen. She is an alumni of CBCs Workshop for Diverse Creators, HotDocs’ Doc Accelerator Program, and Reelworld Film Festival’s Emerging 20 Program, as well as a recipient of the UN Women Yvonne M. Hebert Award for filmmakers and photographers. Her work has been supported and championed by platforms including the Academy of Canadian Cinema and Television, Canada Council for the Arts, Ontario Arts Council, Prism Prize, RBC, ArtReach Toronto, Inside Out, and TIFF Next Wave. Nayani is currently in post-production for her first dramatic feature THIS PLACE, in partnership with Telefilm Canada’s Talent to Watch Program.

This fall, Nayani was also recognized in the RBC Women in Film Series at the Toronto International Film Festival. Recognized for her ongoing commitment to push forward for more diversity and inclusivity, she had the opportunity to share her journey in film and television through the Festival’s virtual and in-person experiences.

We had the opportunity to interview Nayani to learn more…

We love how your bio says, “dreams of creating borderless heart work, within and beyond our little-big galaxy”, tell us more?

VTN: My dream is for my storytelling and cinematic work to reach across all borders and boundaries, to interact with audiences globally, in every pocket imaginable. The world we live in, the universe and galaxy it exists within, are so unimaginably vast. I dream of my work reaching everywhere it possibly can, as we move forward into the future of film.

There are so many great ways to present the stories we want to tell. Why did you choose film?

VTN: I love the real-time combination of sound and picture – to share a story, to document lives, to preserve a moment. Also, the knowing that anyone can return to a film at any time, and revisit and remember the feelings they first had, while also experiencing it anew – what a privilege that provides. The collective experience of film, of watching it with others, of reacting with an audience of those known and unknown alike – there is something so magical about it. As well, I love the number of people it takes to make cinema possible, to imagine and piece it together, to nurture a film into fruition. I love collaborating and dreaming up new worlds with other like-minded, like-hearted, and like-spirited folks. Birthing something together, which reflects all of us – what a wonderous thing. It is a privilege and pleasure each time I get to contribute to this type of communal creation.

Women have faced many challenges in the entertainment industry, but as a woman of colour are there additional challenges that we may not be aware of?

Oof, where do I start. That the gatekeepers do not trust the expertise of our experiences, don’t honour the inherent and intimate understanding we have of our communities, and that they don’t hear us when we speak with conviction and clarity. They ignore us too often. It is frustrating and tiring that we don’t receive the same kinds of investments in our art-making and that we have to prove ourselves in ways no one else is ever asked to, especially Black and Indigenous women, as well as gender-diverse filmmakers from our communities. We are almost always doubted, while also facing imposter syndrome ourselves, which we have ingested and been socialized to carry. It is so hard to put into words all the challenges we face – it is often overwhelming and consuming, and again, exhausting. There will never be enough words to encapsulate our varying experiences of trying to simply create what is in our hearts. We are so tired, as Black, Indigenous, and other women of colour filmmakers. As gender-diverse BIPOC filmmakers, this is why it is critical we are at the forefront of our own cinematic creations, not only in front of the camera, but behind the camera, – in every department – especially where it concerns control in producing and running the show, from start to finish.

We’ve read that you’re also a yogi instructor. Do you find yourself bringing the philosophies into your work often?

VTN: 100%! I am generally a chill person. I am easy-going and relaxed most of the time, but when I start to feel the inevitable anxieties, fears, and doubts creeping up, I return to my breathing. I remember equanimity and the power of it. I recall what feeling grounded and safe feels like me. I know how to take a moment, take a deep breath, and take stock of the moment I am in. I remember I am wherever I am with a purpose, and I call on clarity and focus within me, which becomes so much easier to access, through the breathwork and subtle body movements that my yoga training as a teacher has given me access to.

Being recognized in RBC’s Women in Film Series brings another level of awareness to your work. What has it offered you?

VTN: Access to audiences I never dreamed of. A platform that only one like this can afford. A reminder and affirmation that all the work I have done over the past decade has not been in vain, that people see and hear and believe in me. We need that as filmmakers, because this work is often so isolating and scary and overflowing with doubts. It is not for everyone and our resolve is tested continuously. I am still emerging in many ways, currently in the middle of finishing my first feature drama. As I work towards completion, and the development of other work on my slate, this series has given me access to people I did not have prior. It’s allowed more folks to know who I am, to hear and see my name, to wonder what I am up to next. That is a gift and a privilege I am deeply grateful for.

What do you enjoy most about TIFF?

VTN: Watching films with friends and peers, attending industry conference conversations and panels, and running into people as we run around from one screening or event to the next. I missed that a lot this year. But somehow, we still found ways, as peers and audience members alike, to gather virtually and be in communion. That is the thing about film – those of us who live in this world and love this world will always find a way to gather out of that love for the craft.

COVID has changed the way we do things. What has changed for you and how has it affected your work?

VTN: I have more time for reflection and contemplation, more time for stillness and rest. Less running around for meetings and filming and other gatherings, more time to connect with folks and dream anew from the comfort of home. So much time used to be wasted for me, running from one thing to another. Now, I get to reach and connect with others directly from my own safe space and get that much more done. COVID-19 has been an absolute and utter nightmare for folks globally. But the one thing I can say it has afforded me, from my position of relative privilege and safety (which I will never deny), is time for myself to be still and quiet. Which, for me, is critical to my creative process.

Who are some people in the industry who have made an impact on what you do?

VTN: Dee Rees comes to mind immediately. Her capacity to weave carefully chosen dialogue, strong structure, and poetic elements, resonates deeply with my storytelling sensibilities and hopes. She uses both silence and dialogue so effectively, constantly aware of where words make the most sense. I am also inspired by her decision to stay out of the public eye and off public platforms, letting her work speak for itself when it is ready.

Also, Nina Yang Bongiovi. I had the privilege of meeting her in 2018 at TIFF’s industry conference, through a festival pass provided by Share Her Journey. I asked her a question during the Q&A, at which point I cried in front of a room full of people (including her!). Later in 2018, I was blessed to break bread with her in NYC, where we shared our journeys over enough food possible for two people. Nina epitomizes all that is crucial and needed in this changing landscape of cinema and television, especially as a woman of colour and Asian-American producer. She inspires me to keep it moving and make more space for storytellers from our communities. It is so affirming to know someone elder to you who has been and is continuing to fight for the changes you are focused on too. I am so grateful to have crossed paths with her.

Did you see any TIFF films this year? Any films, or actors, you would recommend we keep an eye out for?

VTN: BLACK BODIES, directed by my dear friend Kelly Fyffe-Marshall, produced by my friends and comrades, Tamar Bird and Sasha Leigh Henry. Nothing else to say but everyone needs to watch this short film! Also, Sasha’s short SINKING SHIP – I was banging on the table, clapping, and tearing up, feeling the truth of what she captured in that film through the characters and the beautiful way it was all documented. And my friend Tiffany Hsiung’s short SING ME A LULLABY, which documents her own mama’s personal journey. Wow. Tears. So deeply moving and poignant. Also, everyone should watch Michelle Latimer’s documentary INCONVENIENT INDIAN, an adaptation of Thomas King’s book, as well as Tracey Deer’s BEANS, which documents the Oka Crisis through the lens of the incredible young Kiawenti:io. Basically, anything by Black, Indigenous, and other women of colour filmmakers. Pay attention to them, to us, to what we have been creating and will continue to create. Support us and lift up our work. We are changing the landscape of cinema and what is possible through this medium. I am so excited for all of them and grateful to be witness to their brilliance!

What advice do you have for young people, and particularly women of colour, who want to get into the film industry?

VTN: Find your community. One that you trust, that you love and respect deeply. One where you champion each other, where you support and lift each other up. This industry can be incredibly isolating and lonely. But with the right people around you, with others of your own heart, mind, and spirit, it is beautiful and magical and ever affirming. I am so deeply grateful to and for my community of Black, Indigenous, and other POC filmmakers. To be witness to their journey and for them to testify to my own, it is a mighty, powerful, and life-affirming privilege.

Thank you to RBC Canada for offering us this opportunity to chat with V.T. Nayani for our Women in Film Spotlight.