I’m often curious about the daily Google Doodle. You know, that thumbprint artwork that pops up in the corner of your Google Search each day? There’s meaning and significance behind each one that brings attention to a person, celebration, historical moment, important issues. There’s a team behind creating and researching what is featured each day and today’s really caught my attention as an art lover. At first glance, you may think it’s Frida Kahlo with it’s bright colours and pulled back dark hair of the woman that is surrounded by paintings. But upon closer look, the Google Doodle is actually celebrating what would have been the 142nd birthday of German artist Paula Modersohn-Beker.

Here are some interesting facts I’ve learned about this artist that has made her an important figure for women and the art world.

At age 22 she moved to an artist’s colony in Worpswede and met her husband Otto Modersohn.

As a pioneer of Modern art in Germany, she was first exposed to the art of Paul Cezanne, Vincent van Gogh, Paul Gaugin, Henri Rousseau. Perhaps not as well-known, she helped the modernist moment along side artists Pablo Picasso and Henri Matisse.

She was the first woman artist to paint nude self-portraits. 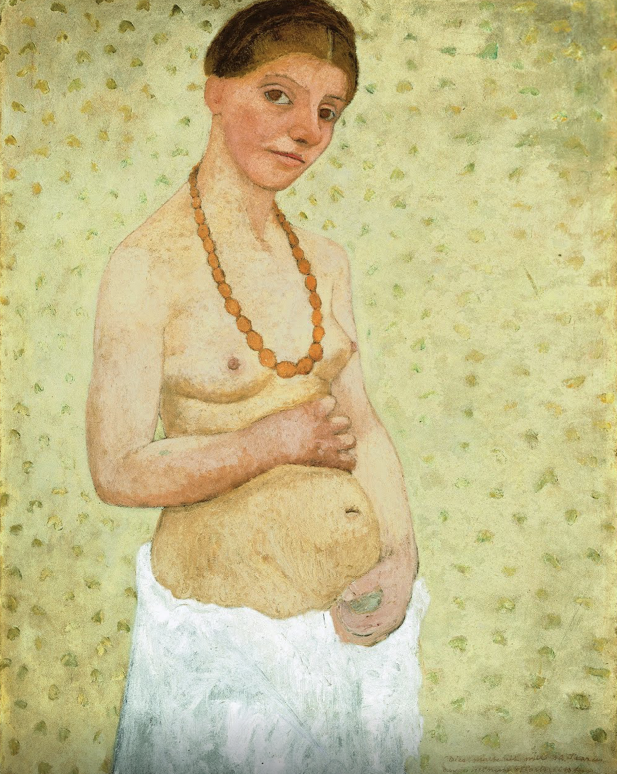 This image of her work was very intriguing . When this painting was created, the artist was not pregnant although it is suggested. The inscription on the bottom right corner and her calm gaze gives the viewer a more personal look at the artist – according to Google, this shows the painter’s confidence in her artistic calling, abilities and creative power.

She was known to be more expressive in her paintings and went against traditions making bolder choices not only in technique but also her subjects. Aside from self nudes, Modersohn-Becker often painted women breastfeeding at time when society’s expectation of women were more modest.

It was only after her early death, following the birth of her daughter Mathilde in 1907, that her works were examined, exhibited and purchased by art collectors. She was 31 when she passed away from an embolism in her leg just 19 days after the birth.

The building built and dedicated to her in 1927 (Böttcherstraße) was the world’s first museum for a female painter.

The Google Doodle was created by Golden Cosmos (Berlin)