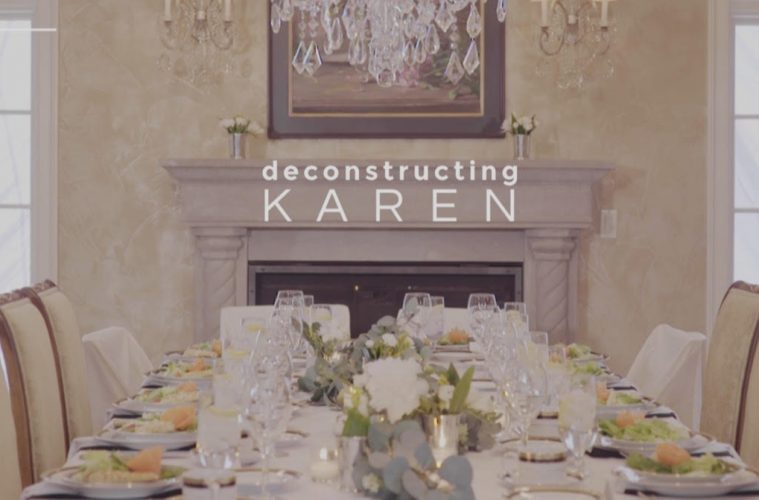 What Happens When a Karen Gets Called Out

Karen is coming to dinner. In fact, she’s at your table already. Or perhaps you’re the Karen. If you’re white, you’re racist, at least on some level. That’s the point the makers of the Deconstructing Karen documentary are trying to get across. But how accepting are middle-aged white women of this concept?

As a member of the target audience, a white woman in her forties, this is a tough message to swallow. But admitting you share some bias, even on the tiniest level, is the first step to dismantling your racism.

DINNER IS READY, BUT ARE YOU?

Part of Hot Docs, Deconstructing Karen is an invitation from Race2Dinner, the team is comprised of Regina Jackson (Black) and Saira Rao (Indian) and Lisa Bond, the team’s “resident white woman.” Jackson and Rao enlisted her as part of the team after she hosted her own dinner a few years ago. What began in 2019 as an outlet to dismantle President Trump’s hate campaign has developed into a full-blown business.

Averaging $2500 per dinner for eight women, guests will check their privilege, entitlement and kleenex at the door. There’s no crying to be had, white women are not the victim this time, and must adhere to Regina and Saira’s rules. The table talk is direct. You’re immediately confronted and challenged. Being asked beyond if you identify as a racist, but down to your daily interactions. Do you shop at Black-owned businesses? Did you vote for Trump? Digging deeper than the usual platitudes, guests are urged to go beyond merely “doing the work”. Dropping that you had a Black best friend once does not make you an ally. But what does?

SO IS KAREN READY FOR REAL CHANGE?

Despite the murder of George Floyd, a global pandemic and a looming recession, Regina and Saira are resolute in their focus. Documenting the last century’s most grisly and brutal examples of murder at the hands of white women, the facts don’t lie. Liberal white women are the single most dangerous group in America.

“You know that more White people are on welfare than Black people, you know that right? At these dinners we see white women behaving badly. And that bad behaviour looks like denial of white suprememcy, denial of racism, and even denial of slavoury. This is nothing new, this has been going on for centuries”

Acknowledging that it is thankless work and change is slow if not stagnant, the Race2Dinner team has thought about shutting the business down on more than one occasion. But ultimately neither Regina nor Saira have plans of packing it in. Instead, they’re focusing on the next steps and pathways to waking white women up and fostering true allyship.

It’s a big ask for people who are emotionally vacant. But continuing to focus on the narrative that change is possible, and that if even one white woman wakes up and realizes her role in a racist society is a win.

Think you’re ready for dinner? Host your own or learn more about speaking events, consultations or donate to their community fund to inspire learning opportunities here: