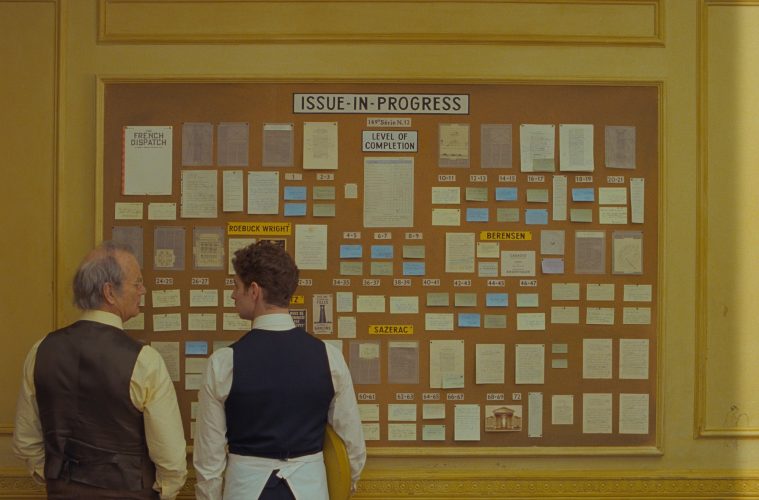 Wes Anderson Serves Up Wes on Steroids with The French Dispatch

You kind of either love film director, Wes Anderson’s world or you don’t. He doesn’t make the kind of movies that are easy to ignore or forget and I will say, right now, I am buying whatever Anderson is selling and The French Dispatch, his 10th film, is serving up all the surreal quirkiness in a delightful homage to journalism from days gone by. 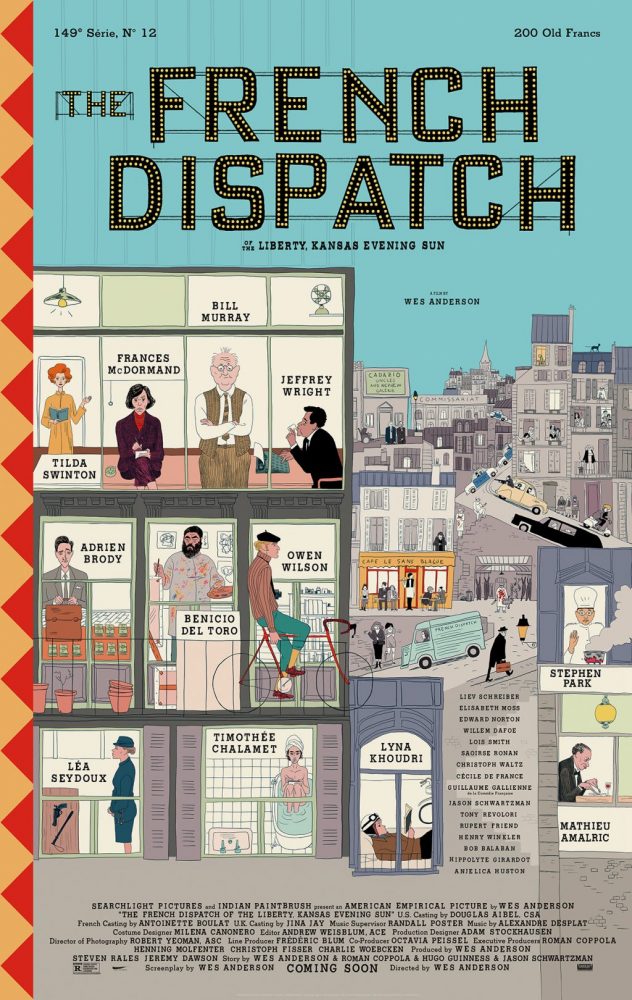 The film is composed of, what turns out to be, the final three editorial stories that will appear in the final edition of the French Dispatch (clearly modelled on the New Yorker) as the editor-in-chief (Arthur Howitzer Jr. played by Bill Murray) dies at the beginning and his final decree is that, upon his death, the publication will be disbanded. THAT story is the fourth mini movie within the movie and, although a device that Anderson has used in the past, it still works. For all of his critics, I am absolutely fine with a director who spends decades honing his precise vision and, to be honest, if you are not fully on board after the opening scene with the waiter taking the tray up to the offices of the Dispatch, you are not of his tribe and that’s okay. 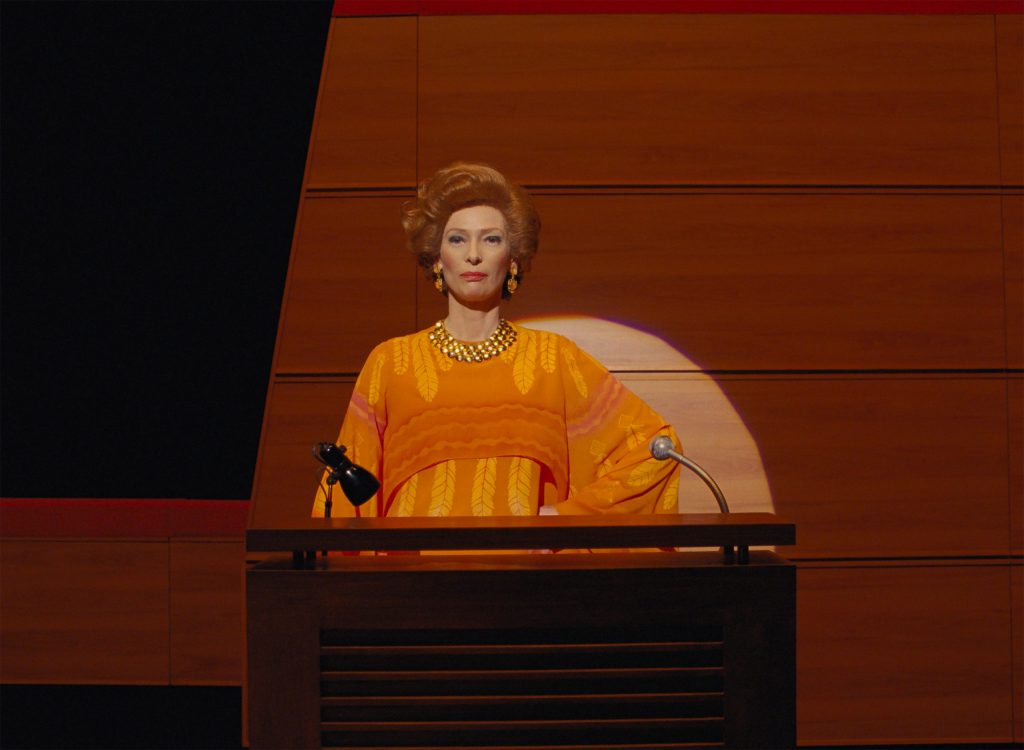 We are taken on a wild, wacky journey led by the three top writers. Tilda Swinton plays art critic J.K.L Bernensen who shares her story about a genius artist who is also an insane inmate and might have been her lover, Lucinda Krementz (Frances McDormand) takes us on an adventure of French youths in revolt in which none of the actors are old enough to even know what the French Wave was but have clearly done their homework. Then there’s the insane crime caper that was supposed to be a chef profile by food writer Roebuck Wright (Jeffrey Wright) and my least favourite, the first vignette that sees travel writer, Herbsaint Sazerac (Owen Wilson) cycling through this imaginary French town on a whirlwind tour, exploring past and present. It might have been my least favourite story but absolute favourite name and if I ever get another dog, he will be named Herbsaint Sazerac.

These fictional writers all represent a  romanticized time when journalism was king, writers were given freedom to explore beyond basic facts while it reveals the true loneliness of the writer’s life.

The actors all appear to be having a hoot, the costumes, hair and makeup, sets, production design and cinema photography are absolutely delightful, as expected. For a director to be able to summons this many A list actors, even for tiny cameos, shows the level of admiration and respect he garners within the industry – I won’t reveal the plethora of stars who show up on the screen, even just for a moment or two because spotting them is half the fun. 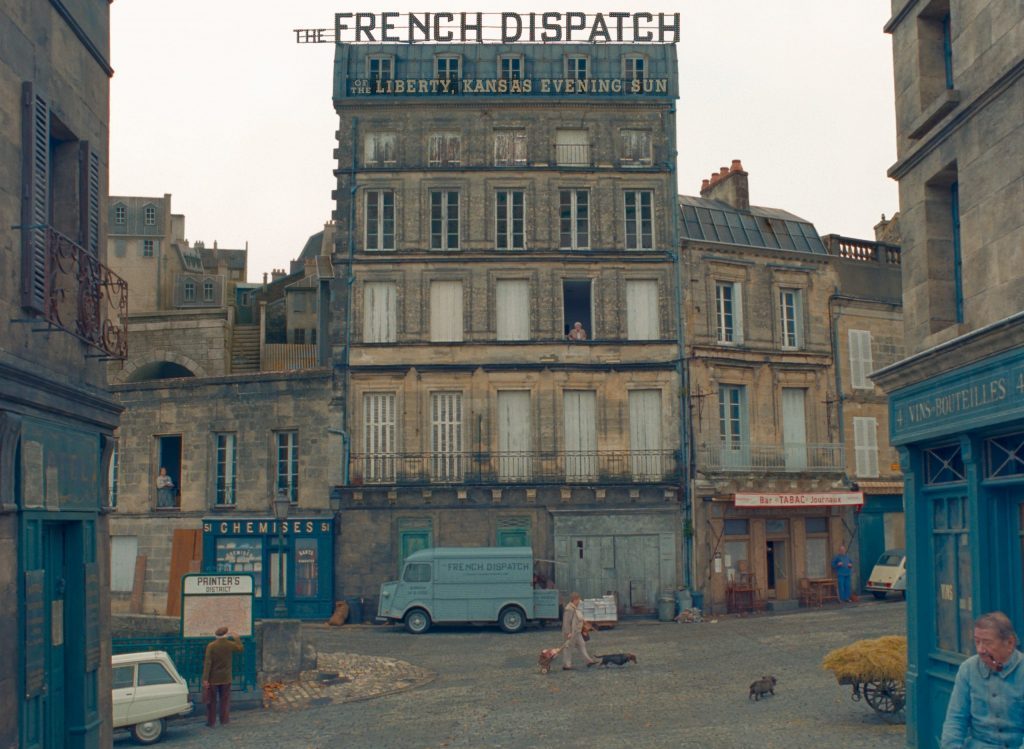 All in all, this is a beautiful, delightful romp with moments of touching emotion that take you by surprise that combines animation, live action, madcap adventure, a love letter to a romanticized idea of journalism, Paris and a time when everything wasn’t always about clicks, money and book deals as well as first class performances all around. Wes Anderson might be a bit polarizing but you can’t say you don’t know what you are getting into.