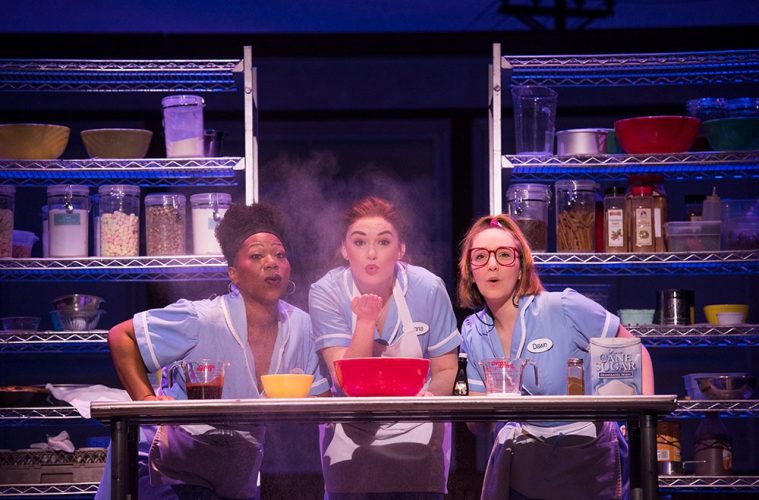 I’ve been dreaming of pies ever since I saw WAITRESS, the musical that’s now on stage at the Ed Mirvish Theatre in Toronto.

WAITRESS tells the story of “Jenna”, an expert pie baker working at a local diner and stuck in a loveless marriage. To celebrate the six-week engagement of WAITRESS at Toronto’s Ed Mirvish Theatre, the Toronto Star ran a Pie Recipe Contest for its readers to search for the three most creative recipes inspired by the quirky pies from the musical.

The three finalists were Kathy Slobodian (Adamowich) of Etobicoke, Devon Clark of Burlington, and Doug King of Shelburne ON. And the winner, based on the judges decision of taste, presentation and creativity is Doug King.

Lucky us! Here is Doug’s recipe! BTW, his recipe is included in the WAITRESS, pie cookbook available at the theatre.

Directions:
Crust:
Combine, flour, sugar and salt in a food processor. Add the butter and pulse the mixture until the pieces of butter are pea-sized. Add in HALF of the beaten egg and reserve the other half. Add in the lemon juice and water and pulse until fully combined. Pour the dough onto a lightly floured surface and form it into a disk. Refrigerate for 45 minutes.

Preheat the oven to 400 degrees. Once the dough disk has been sufficiently refrigerated, remove it from the fridge, roll it out on a lightly-floured surface, then drape it into a 9″ pie plate, trim the excess and pinch the edges. Line the pie shell with aluminum foil and pie weights, then bake for 20 minutes. Remove the foil and pie weights, and bake for 8-10 more minutes, until the crust just starts to brown. Brush the hot crust with the remainder of the beaten egg. Cool completely on a baking rack.

Truffle Filling:
In a medium saucepot, heat the heavy cream over medium-high heat just until bubbles start to form, do not let it boil. Remove from heat, stir in the chocolate chips, vanilla extract and cayenne powder. Continue stirring until the mixture is smooth.

Spread this filling evenly in the bottom of the cooled pie shell. Freeze for 20 minutes.

Topping:
Remove the pie from the fridge just before serving. Microwave the chocolate, butter and cayenne pepper in a small microwavable bowl in 10-20 second increments, stirring after each increment, until fully melted. Drizzle this over the pie, and top the pie with the chopped peanuts. Serve.

WAITRESS is now on stage in Toronto at the Ed Mirvish Theatre until August 18. For more information visit www.mirvish.com