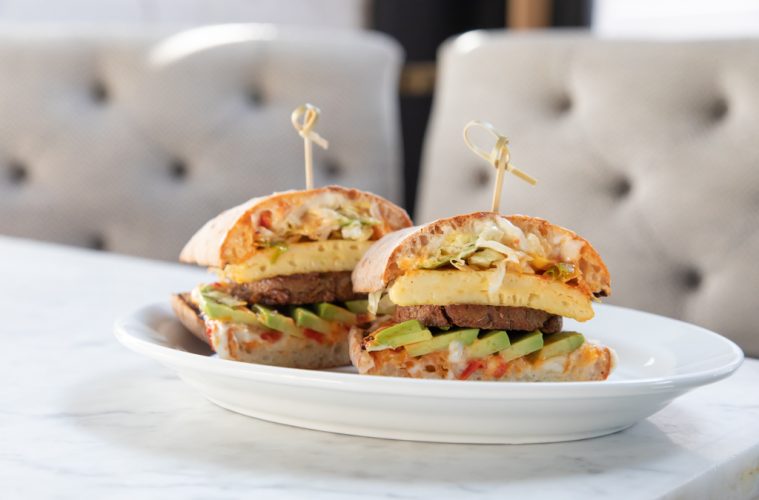 Stefano’s Sandwiches has perfected a marvellous meatless menu. The popup concept housed in Ufficio is cranking out handcrafted plant-based comfort food with flair. And its popularity is downright feverish. Our very own monochromatic slightly Schitt-scented Dan Levy has proclaimed these sandwiches the best he’s ever had, which I have to assume he’s tried a bunch (although with his svelte figure I would assume he’s following a keto diet).

Running a swift takeout game on Dundas West, Stefano’s Sandwiches come stacked on made-in-house buns, slathered in homemade sauces, including the mayo. The noodles for the Mac and Cheese, Chocolate “Milk” and Italian influenced desserts like Tiramisu are all crafted in-house too. Pretty much everything but these cutesy (but super-structural) toothpicks are made in the tidy kitchen.

All Day Breakfast ($13 lead photo) takes avocado toast to new heights. Convincingly eggy, mung bean protein gets the science award for egg-like texture. The “eggs” are fluffy and balanced like an actual egg would be in this scramble format. Sitting on precision-cut avocado and a nifty little pinto-bean sausage patty, this protein-loaded sammy is the handheld breakfast you’ve been craving.

Crafted like the Colonel, only with much cleaner ingredients, the Vegan Fried Chicken Sandwich ($14) is finger-lickin’ good. Like undeniably delicious, seek-this-sammy-out good. Made by Heura Foods, this “chicken” is phenomenally chickeny, it’s impressive and interesting, it’s familiar and as it is foreign. It’s like the best parts of chicken, the moist and stringy texture is bang-on- and it possesses poultry’s documented ability to take on any flavour thrown at it. It is soy-based succulent and magical. Ziya Tong, host for Discovery Channel loaned the secret spice to the recipe that develops these traits further. All dressed up on one of Stefano’s ciabatta buns, it’s a showstopper.

Combo it all up with some daring sides, like the immaculately conceived Vegan Avocado Cashew Caesar ($8) with necessary crunch factor by way of ‘parmesan cheese‘ and crispy croutons. Definitely don’t pass up the Vegan Mac & Cheese, it’s got lovely crunchy bits and that ooey-gooey cheese factor, it highlights the recipe achievements of Stefano- his kitchen wizards have struck again.

Stefano’s Sandwiches is Open Wednesday to Sunday 12-8pm– Check out their Instagram for up to date specials and new menu items.

Stefano Sandwiches, along with other plant-based dishes are also available
on Doordash from our sister restaurant Ufficio.