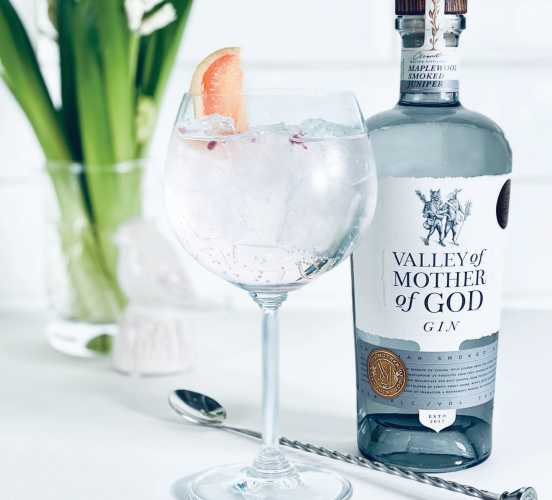 In the O Henry story “The Lost Blend,” the characters go nearly mad when they cannot recreate their perfect recipe for a cocktail that was “distilled elixir of … money and high life. It was the color of gold and as clear as glass, and it shone after dark like the sunshine was still in it.”

Much to their dismay, a lost blend was appearing to be the fate of the creators of Valley of Mother of God Maplewood Smoked Gin. Malcolm Roberts and Shelly Perry hit gold with the first perfect version of their maplewood smoked gin. They had made it, they had loved it, they had taken it to London and expert tasters had raved. They thought they had knocked it out of the park, and then they could not recreate it.

Spoiler alert: both of these stories have happy endings. But first, back to the beginning.

I had the chance to speak to Malcolm Roberts and Shelly Perry about their gin, a true passion project, and I asked why they had aimed for a smoked gin.

Malcolm explained that they knew that they wanted a smoked gin from the get go. They wanted something uniquely Canadian, something that would speak to the provenance of the area, something that epitomized Canada. That something was smoke, and the outdoors–bonfires on the edge of the forest.

When I noted that the smoke is really subtle, they explained, “That was our aim.  We wanted it to be a memory of the smoke.  It’s more of a feeling, something you discover as you’re drinking it.”

Sipping this gin is about evoking an emotion, a memory of sitting around the camp fire, a trace on your clothes long after the fire. Smoke can be horribly bossy, but this smoke is gentle, subtle.

The goal, they explained, was both to stay true to the character of a London Dry Gin and to appeal to whisky drinkers. They also wanted to appeal to a younger demographic, who favour a softer juniper flavour. Their gin has the botanical complexity of a traditional London Dry Gin, but to appeal to the audience they were after, the choice of juniper in the gin was critical: it had to be woody but not too piney.

More than 20 Kinds of Juniper

The road to the perfect gin took experimenting with more than 20 kinds of juniper. Juniper berries are the female seed cone of the juniper evergreen, and they are the definitive ingredient in gin.

Malcolm and Shelly, a self-proclaimed supertaster, made distillations of each kind of juniper so that they could control for the character of each juniper they tried. They tried junipers from across Canada and from abroad. After testing more than 20 varieties, they settled on a combination of juniper from the Ottawa Valley, where they have a farm, and from Tuscany.

They also made individual distillations of each botanical ingredient, and their gin has over 20 different botanicals.

The Journey to Excellence

There was only so far Malcolm and Shelly could go with their home alembic still. Once they had a base they were happy with, they worked with Charles Maxwell, a tenth generation ginsmith working as a master distiller at Thames Distillers in London.

“Ours was the most complex gin they’d ever worked on.”

It took a lot of back and forth consultation, and after 13 iterations they settled on the final version of their Canadian Dry Gin.

Valley of Mother God London Dry Gin is the gin they made while on the road to recreating the maplewood smoked gin.

Malcolm and Shelly knew they had a great base gin, and they released that in the LCBO with great success. Valley of Mother of God Canadian Dry Gin became the best selling limited distribution spirit at the LCBO. It did so well that it is now available across the province and not just in limited distribution.

So how did they battle for the lost blend for the smoked gin? Their method is to smoke the juniper berries over maplewood. Shelly explained that, in part, their inability to recreate the original recipe was a matter of scaling up. They could not recreate the smoked character of the original version on a larger scale.

More importantly, they learned about the impact of all of the variables that affect that very particular local flavour they were after. All kinds of conditions affect the smoke: the season, the humidity, the temperature on the day of smoking.

It took TWO more years, but Maplewood Smoked Gin was launched at the Spirit of Toronto show in May and the reception was fantastic.

Valley of Mother of God Smoked Gin is now available for $72.95 in the LCBO in limited distribution.

Malcom and Shelly created their Maplewood Smoked Gin with the intention that it be sipped neat.

I’ve tried it that way, and it is deliciously smooth and sippable.

If you’d prefer to mix your gin, they say that it makes the perfect Martini.

If your taste runs to Negronis, adjust the ratios to use more gin, so that you get the full experience of the smoke (the bitterness of the Campari can overpower the smoke).

And, if your taste runs to a classic G &T, they recommend this delicious take on a Spanish style gin tonica.

Cheers to perseverance and to happy endings!