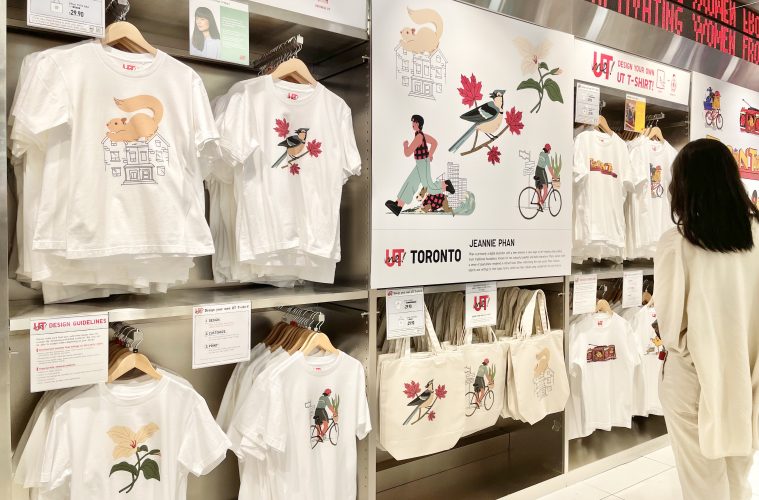 If you’ve always wanted to create your own t-shirt  you can now do so at the UNIQLO flagship store at the Toronto Eaton Centre. When you visit the store find your way up to the second floor to the customization UTme! booth where you can upload photos and/or select from their library of stickers, graphic fonts and paints to create your own original t-shirt within minutes. Need some inspiration? The section is filled with many of UNIQLO’s current graphic tees as well as iconic ones that have been in the collection for years and are on display.

In celebration of the launch, the Japanese retailer has partnered with two of Toronto artists Jeannie Phan and Allan Ryan (aka Uber5000) as part of the brand’s continued commitment to the arts and local community. Customers interested in creating their own t-shirts have access to exclusive Toronto-inspired designs by the two artists. 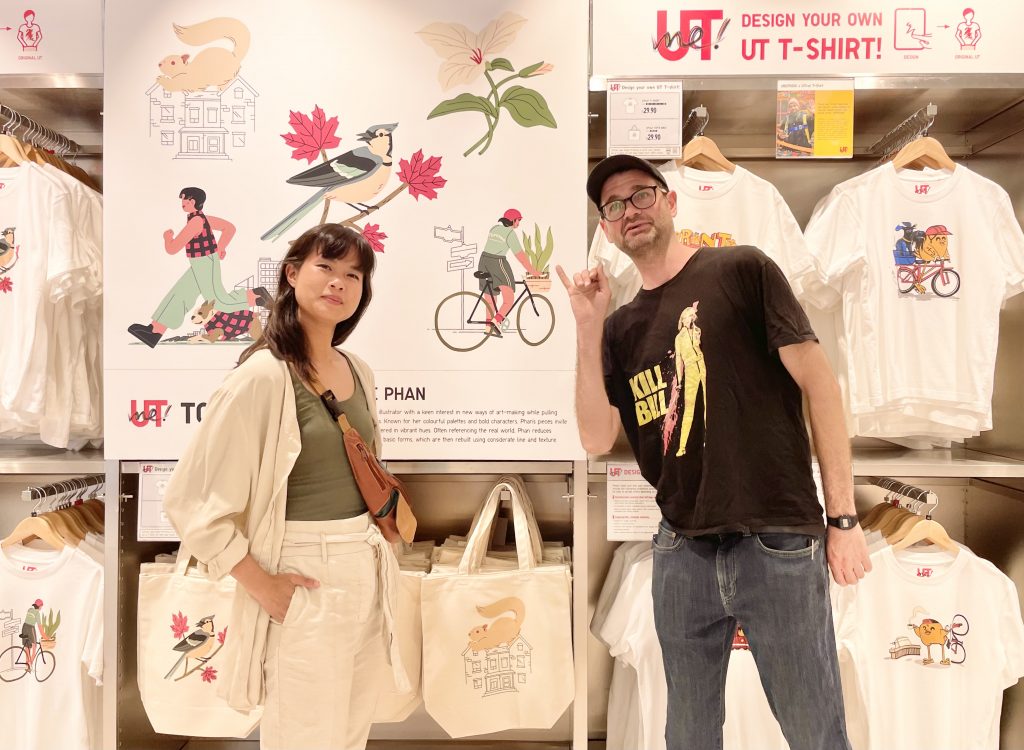 Allan Ryan (Uber5000) is a Canadian artist specializing in large scale murals and illustrations.An interest in graffiti and printmaking, led to the creation of larger life-sized murals. Much of his work can be seen around Toronto and across Canada.He often paints his iconic yellow bird character ‘Lucky’ on imaginary adventures with his real-life dog Hubble. Originally from Cape Breton, Nova Scotia. An interest in the ocean, aquatic life and maritime culture is a prevalent theme in his work.

His fun yellow bird graphic is one of this most recognizable characters. He tells us he created the image when he was once hired to paint a gift shop. His direction was to just make it fun. “At that time I was into doing weird anatomy drawings of brains and really artsy kind of stuff,” said Ryan. “So I thought about what I could do. I began drawing a bird opening a gift but you couldn’t see the gift but he was super excited to be getting a gift. It took me about two minutes to draw the outline of him and he was so happy. Then I thought I need to keep doing this but in different positions. It then became this long adventure.” 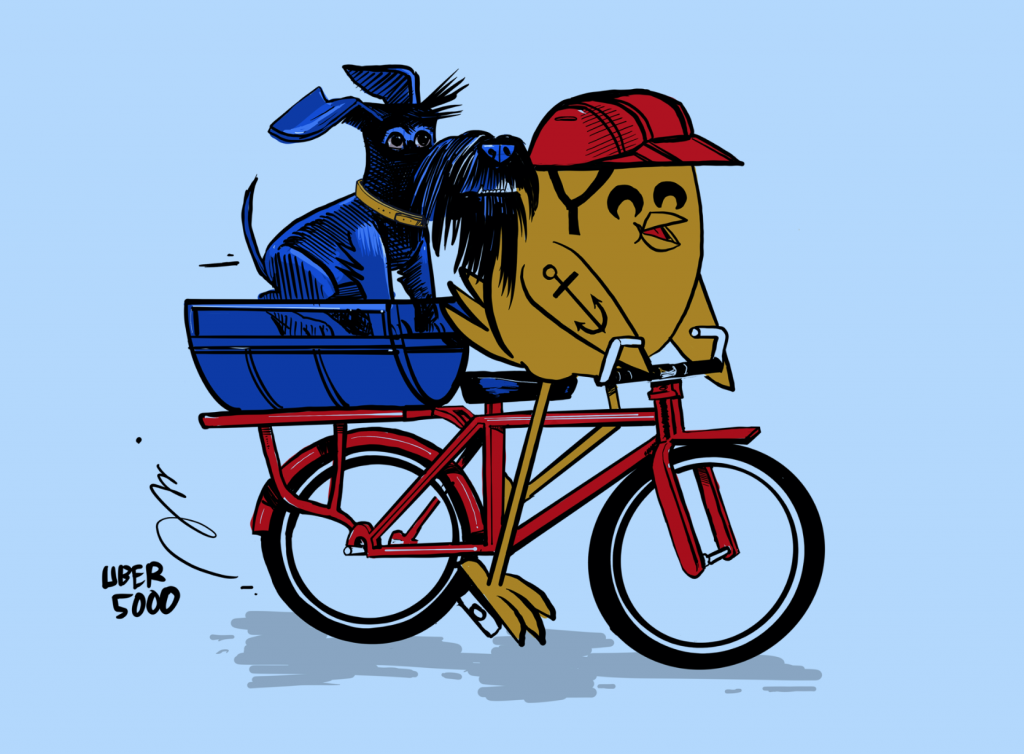 For UNIQLO, Ryan explained that he wanted to his designs to reflect Toronto. Exploring the city on bikes was popular (there’s a really cute design that includes his dog – a Schnauzer) but there’s also a subculture of cyclists and coffee he’s seen even amongst his friends that he’s noticed.

He also gives a nod to Toronto’s music scene as its globally recognized. Ryan plays on the theme by incorporated a boom box with the city’s streetcar on another graphic. And of course, the now famous Toronto sign located at Nathan Phillips Square gets his fun treatment with his yellow birds as the O’s.

Jeannie Phan is an award-winning illustrator with years of active experience in the field. Jeannie has worked with clients including The New York Times, Vogue, The Globe and Mail, The Smithsonian and many more to create amazing art. Phan works with a broad spectrum of subjects, with a personal interest within lifestyle, health and wellness, workplace issues and science.

Phan’s artwork reflects Toronto and may look familiar to many. Amongst her designs for UNIQLO she includes Toronto icons in various forms –like  the elusive white squirrel perched on century old homes that often surround our city’s parks. There’s also a Blue Jay Phan  wanted to include in the collection of designs inspired by her recently discovered love for bird watching during recently the pandemic lockdown. “Living near a park I began feeding birds and specifically there was a blue jay that would visit regularly. I thought, they too are surviving in the city just like us and it’s also a reference to our sports team.”

The trillium is iconic but surprisingly they aren’t as easy to find. “There’s a specific areas in High Park with little patches that you have to seek out,” said Phan. “I love this flower because it’s delicate, it only blooms for a short period of time and trilliums also come in red which is really rare to find. I included my interests of birds and floral into my designs as they seem like little things but they are big things that I love about the city and because we crave nature.”

Another graphic includes a cyclist with a plant in the front basket on the move. “I use to live close to a bunch of boutique plant shops on Queen West and this is how we brought our haul home. There’s a pride to bringing weird stuff home on your bike,” said Phan. 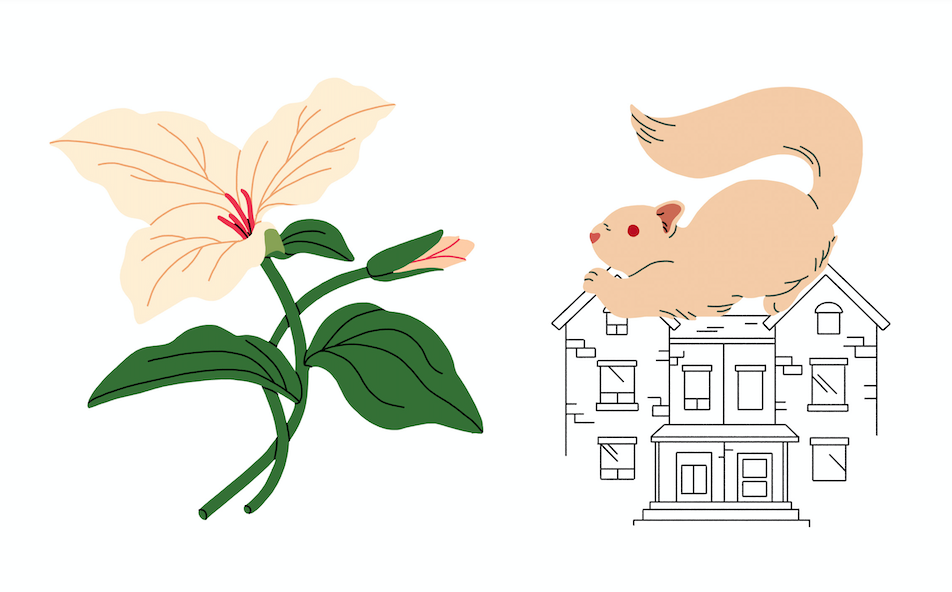 How it the UTme! custom tee program works:

Available currently only at the Toronto Eaton Centre location. Customers will be directed to the in-store UTme! booth where they will follow instructions on provided tablets. They can design their own or choose from UNIQLO’s content library of images/stickers (including popular licensed images) and have options to add in text and paint. Once design is created, submitted and paid for, the t-shirt printing takes approximately 15 minutes. Great to do with the kiddies!

Currently, there are also limited edition pre-printed shirts and tote bags with the designs by the two local artists available to purchase in store. 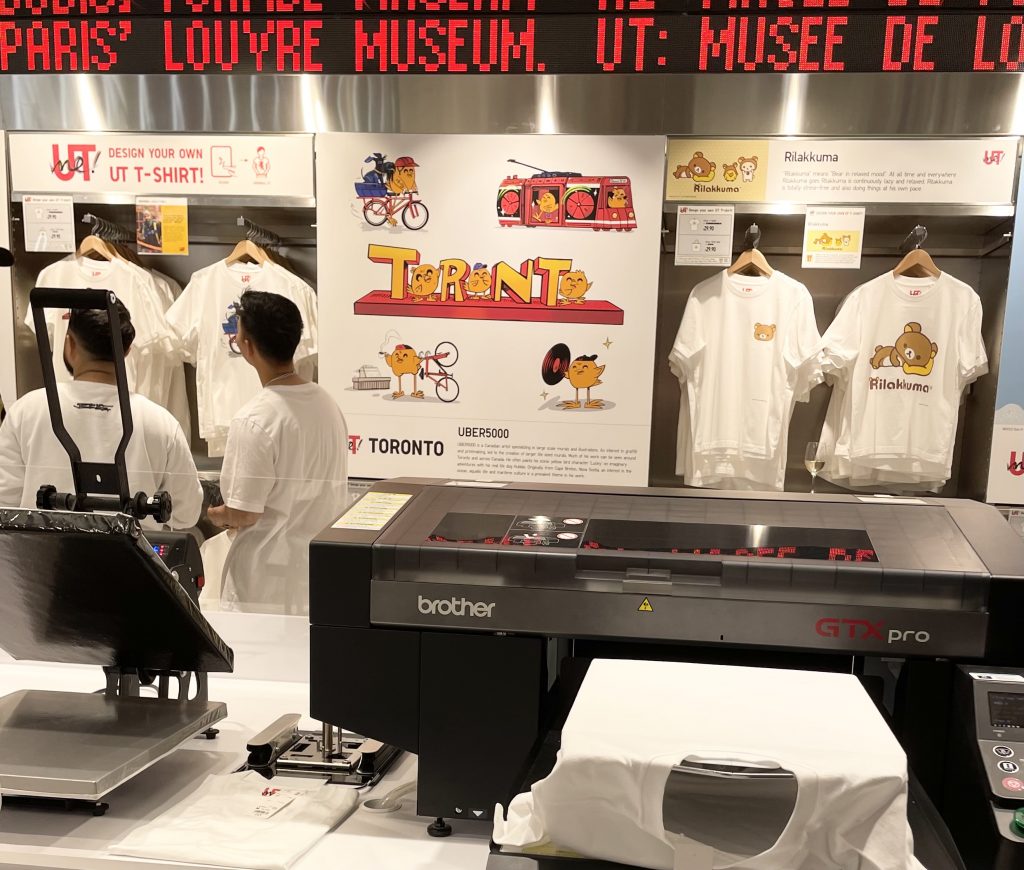