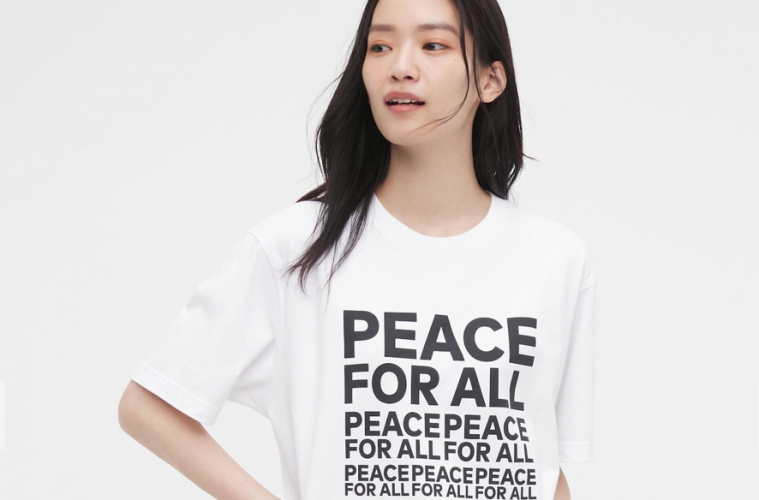 We are all aware of what is happening around the world. With everything unfolding right before our very own eyes in real time it’s hard to not feel the sense of urgency to want to do something…anything. Today, fashion retailer UNIQLO  launches the Peace for All Project.  This charity t-shirt collection will see 100% of the profits donated to the world organizations; UNHCR, Save the Children, and Plan International. But let’s be clear, this isn’t a one off or a capsule collection, this is an ongoing initiative the retailer is committed to wholeheartedly.

“We are starting this partnership together,” said Luciana Bonifacio, Vice-President and Chief Development Officer for Save The Children. “We are excited to see how we embark on this journey and how Uniqlo has framed their objectives and thinking for the long term.” She continues to tell the international media how Uniqlo understands that one partnership may not necessarily solve things but along side the organizations they will support the important ongoing initiatives right on the ground. She’s also mentioned another exciting element is about how this partnership also allows the organizations to reach a new audience and expand the conversation of what they do.

Anne-Marie Grey, Executive Director of USA for UNHCR also mentioned that while the organization has been working with UNIQLO since 2010, she emphasized that they are very selective in who they align with. “We’re very choosey with who we work with. We know it’s a sustainable company. They have dust on their boots and they are absolutely authentic. It’s not just a donation. Their employees are active and engaged at each step to help find innovative ways to help. They are very hands on.”

All the proceeds from the charity T-shirts purchased will be donated to the international organizations to help support victims of poverty, discrimination, violence, conflict, and war. You can read more about the organizations here.

The designs are not just by famous fashion designers but also by well respected leaders in literature, art, design, science, sports, and emerging change makers. “The timing of this launch comes at an urgency and at many levels,” said John Shein, UNIQLO Global Director of Sustainability. “There’s an urgency for us to do something and it’s also the opportunity to engage with creatives on a deeper level.”

This isn’t the company’s first dive into finding ways to help globally but it is the first time they have engaged their customers to join in working towards social good. Twenty five years ago, when UNIQLO first began providing global humanitarian aid, there were 40 million refugees and internally displaced people. Today, there are 100 million. “Never before have we felt the preciousness and need for peace as acutely as we do now.” said John C Jay, President of Global Creative of Fast Retailing Co.Ltd.

By the way, all the creators invited to collaborate had signed on without hesitation and are doing it from the heart. None have accepted any payment for their designs.

Tado Ando (Urbanist, Architect): Is known for his sensitive use of light and concrete. Founder of Tadao Ando Architect & Associates in 1969. Became a professor at the University of Tokyo in 1997 and professor emeritus in 2003. His many works include Japan Pavilion for Expo ‘92, Church of the Light, Osaka Prefectural Chikatsu Asuka Museum, Awaji Yumebutai, Hyogo Prefectural Museum of Art, Modern Art Museum of Fort Worth, Punta della Dogana, and Bourse de Commerce.

Ines de la Fressange (Model, Designer): started modelling and quickly became part of the famous and worldly known top models, walking for the biggest high fashion houses from age 17. She is a style icon, beloved muse for high fashion houses. In 2013, she reestablished her own brand as an art director, embodying modern “Parisian chic.”

Haruki Murakami (Novelist): Born in 1949 in Kyoto Prefecture. Debuting in 1979 with Hear the Wind Sing, Murakami’s major works include Norwegian Wood, Kafka on the Shore, and 1Q84. His work has been translated into over 50 different languages and has received multiple awards, including the Frank O’Connor Short Story Award and Franz Kafka Prize. The UK Guardian has listed him as “among the world’s greatest living novelists”.

Kashiwa Sato (Creative Director): Creative Director & CEO, SAMURAI INC. He is considered one of contemporary Japan’s most respected creative directors. As a comprehensive “total producer” for brand strategies, he collaborates with a number of leading companies on different projects. He produced the launch of UNIQLO’s UT brand in 2007. Also, as a cultural envoy for the Agency for Cultural Affairs, he is involved in promoting Japan’s unique culture, technology and content to the rest of the world.

Shinya Yamanaka (Physician, Scientist): Dr. Shinya Yamanaka was awarded the Nobel Prize for Physiology or Medicine in 2012 for successfully generating induced pluripotent stem (iPS) cells from skin cells. his discovery on how to generate stem cells from existing cells has transformed medical research. He is a professor at the Center for iPS Cell Research and Application (CiRA) at Kyoto University, the Representative Director of the CiRA Foundation, and a Senior Investigator at the Gladstone Institutes in the United States.

It may be a small way for us to do our part but as we know, collectively, that could potentially make a greater impact. To learn more about this incredible initiative link here.