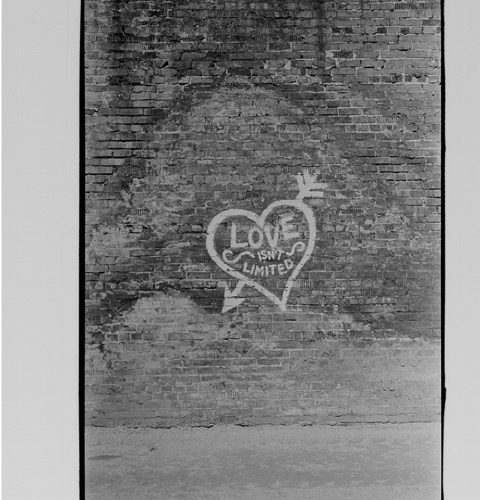 Toronto is a canvas for many artists, in many mediums, but there’s something nostalgic and new about Joan Latchford’s efforts on display at The Cardinal Gallery.

We spoke with gallery owner Chelsea Hulme, part owner with her partner in business, and life, Cory Wilyman about the exhibit, and what Joan’s lens brings to light for modern times in Toronto.

Chelsea Hulme-“Joan’s work made it to us by way of her son Ben Latchford, Owner of Roast Fine Foods on St. Clair Avenue West. Ben and I are long time friends from when we were in our early teens. My husband Cory Wilyman and I opened our little gallery not far from Roast in March of this year and we reconnected with Ben as our small businesses became relative neighbours. Ben showed us his mum’s images and we quickly realized that her body of work was something really very special. There are thousands of negatives, 90% of which have never been seen before. Ben has entrusted us to go through them and carefully curate them.  I’d like to think that Joan would be happy that Ben chose to exhibit her work at The Cardinal as community was very important to her. We aim to be approachable and inclusive and I think that she would have appreciated that. We chose the name “Love Isn’t Limited” from one of her images of a graffiti wall. So in a way she got to name the show herself. As I learn more and more about her I have been personally very inspired by Joan the woman as well as Joan the photographer and have caught myself thinking “what would Joan do?” in certain situations. Joan passed away in 2017 and was avidly photographing everything and everyone on the streets of Toronto up until that time. Ben once told me that he doesn’t remember a time when his mum didn’t have her camera. She wore it morning until night around her neck like a piece of jewellery.”

Quote from Ben Latchford that answers the rest:

“I love my mother very much and I’m proud of her achievements but part of the hard truth of seeing a parent as a complete individual and viewing my mother not just as a parent but as an artist and a social activist, someone who was deeply passionate about documenting the imbalances of society and culture, meant that to a degree the lives of those around were without boundaries. She unabashedly viewed life without bias or pretension.
Interestingly we now live in a world that is seemingly without boundaries as we share our lives through social media and everyone’s business is available for contemplation or critique, but when my mother was taking these photographs in the 1960s and 70s that simply wasn’t the case. Publicly shared images were much more curated, especially images of those depicting racial diversity or transience and I believe that my mother saw that there was something untruthful to those depictions… or perhaps not untruthful but certainly incomplete. Some of these images are beautiful, some of them are surprising and some are very funny and the importance in showing these photographs now is that it allows us to see Toronto culture in a way that was very rarely depicted. The Cardinal Gallery is run by trusted old friends who grew up in some of the neighbourhoods where these photographs were taken. These photographs are really a gift to a shared memory and proof that we can all move through transformation together and call Toronto home.”

All images courtesy of ©The Joan Latchford Estate. View the collection at The Cardinal Gallery by appointment, until January 31st, 2021.