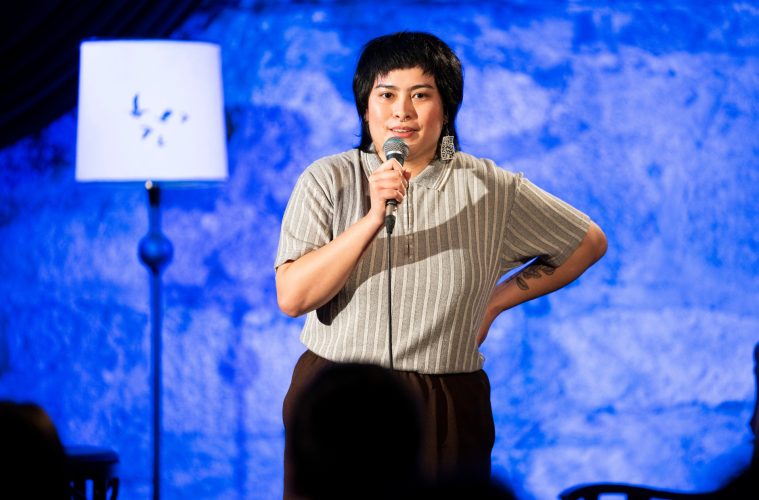 Tin Lorica is riding the New Wave of Standup

A dozen of Canada’s hottest new comics gathered for one hilarious night of standup as part of the JFL NorthWest Festival in Vancouver. These rising stars each headline their own 10-minute episode exclusively for CBC and CBC Gem in the series The New Wave of Standup. Now, back for a second season, a fresh new crop of comedians are featured and they are as diverse as they are funny.

Filipino-Canadian Comedian and writer Tin Lorica (they/them) is co-host of Millennial Live, a live comedy and poetry series based out of Vancouver.

They tell us having a degree in Women’s Studies and having a good sense of humour (read: comedy=cultural analysis) about what they are doing with it played a major influence in their work but also credits their mom.

“My mom was always roasting my dad, which I felt gave me the comedic license to roast my dad and it spread from there. I invented an onomatopoeic word used in my family (“chok-chok”) that is based on the sound of my imitation of my dad casually scratching his balls while watching TV.”

Growing up Lorica never really watched stand-up comedy but their family was a big fan of Adam Sandler. “My sibling and I continue to quote Billy Madison and Mr. Deeds (no, Daddy no!) to this day.”

As for comedians today, they tell us Jes Tom’s stand-up and body of work on Twitter is a favourite. “They’re also Asian and non-binary like me but because they are  also self-proclaimed ‘good’ perverts, which is good representation for both perverts and non-binary people or whatever.”

What has been one of their favourite place to perform? Lorica tell us Celebrities on Davie Street (Vancouver) is top of the list. “I did a 5 minute opening act for Joel Kim Booster as part of Vancouver Pride in 2018 and the stage was beautifully decorated with many flowers, kind of like Nirvana’s MTV Unplugged but in a gay way, not a morose way. I never went there in its heyday as a queer venue so it’s a special show to me.”

Where do they go to for discovering new comedians? Lorica still loves checking out live sets. “There’s a wealth of shows both new and older/more established in Vancouver that really keep the scene thriving. Many of the shows I love have taken place at Little Mountain Gallery, which is now closed and set to be torn down for condos.” They do mention loving Twitter as well but after being on it for the past few years. “But when a comedian doesn’t sound like they “live online” I am less likely to relate to them or like their material,” said Lorica.

We asked for a joke about their own city…

“The rental market. Boom! Fun fact: I used to live in a $300 room that was really the garage of a Vancouver Special home. It really pushed me to be outdoors more. ‘Do you wanna check out my garage?’ was also great pick-up line until I found that there was black mold,” said Lorica.

Where can we find them?

“Stand-up BC: Grossly Underfunded Circus” is an album they recorded with other BC comedians.  It is out now on Spotify, Apple Music, and SiriusXM.

Here’s where you can link to check out all the comedians in both Season 1 and 2 of the New Wave of Standup.