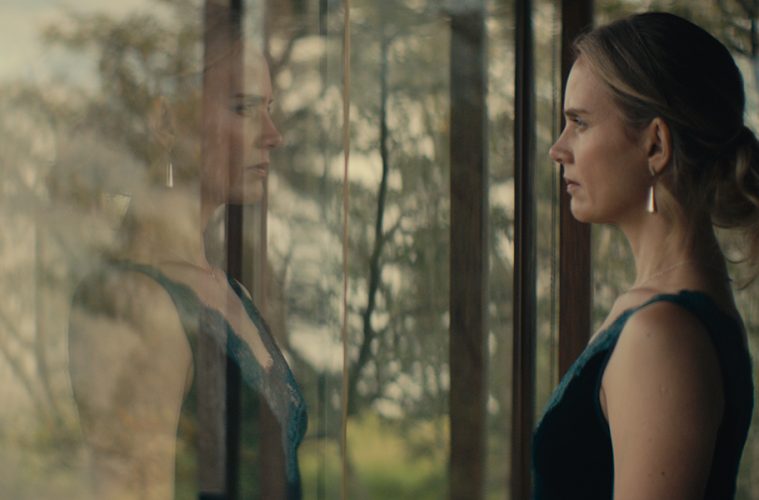 The beauty of the Toronto International Film Festival is the opportunity for the public to see international movies that may not otherwise be available to us through traditional viewing methods.  Blockbusters will land in our theatres or streaming services soon enough but it’s the hidden gems that often are the most captivating. Lo Invisible that was already on my list to see had its world premiere at TIFF this year under the Discovery programming. Not only is the heavy-hearted story worthy of conversations but Ecuadorian filmmaker Javier Andrade gives the audience a luxurious cinematic treatment that is both haunting and beautiful.

The story follows Luisa, played by Anahi Hoeneisen (who also co-wrote the film), as she returns home from a psychiatric clinic after a bout with severe postpartum depression. Her spectacular home in a sprawling landscape should be a place of serenity but it presents itself as a new confinement as she continues to struggle. Surrounded by family members and a brigade of servants her struggles remain invisible. Chefs, night nanny, drivers are all continue without openly acknowledging Luisa’s depression. Unable to continue playing the role of the perfect Ecuadorian socialite wife, Luisa silently and elegantly fades away.

The house itself is breathtaking offering many windows, mirrors and surfaces reflecting and enhancing Luisa’s moods. The walls, the rooms, the views even the closets all tie in to tell the story.

The cast is beautiful combination of established performers and non. Matlilde Lagos plays the quiet but wise Rose, the elder of the housekeepers who’s eyes are telling. A natural born actor and completely comfortable in front of the camera she makes her debut on the big screen in this film. Juan Lorenzo Barragán plays a seamingly loving husband Alfonso, in this first time work as an actor (by day he is a graphic artist, photographer and writer). His character is soft spoken and stays much in the background throughout the film. Gerson Guerra is a multifaceted actor in the theatre scene in Ecuador and was casted to  play Milton the house driver who’s instructed to keep all eyes on Luisa.

Paola Navarrette, who plays Dani the music teacher, is a singer and composer on the vibrant Ecuadorean Indie music scene. She also composed and performed the beautiful soundtrack to this film.

The filmmaker’s ability to find a balance of telling a heartfelt story of what many women experience after childbirth without necessarily being delicate is one that really drew me into seeing this one. It’s easy to say that money can afford this family all the help but you’re left with a feeling a sadness that her suffering is not meant to be seen  — a struggle that we are all too familiar with in high profile women today. Yet, we still are often caught by surprise.  Andrade offers enough dialogue without saying too much to get the storyline across. Instead, the audience views the unravelling in a visually stunning piece.