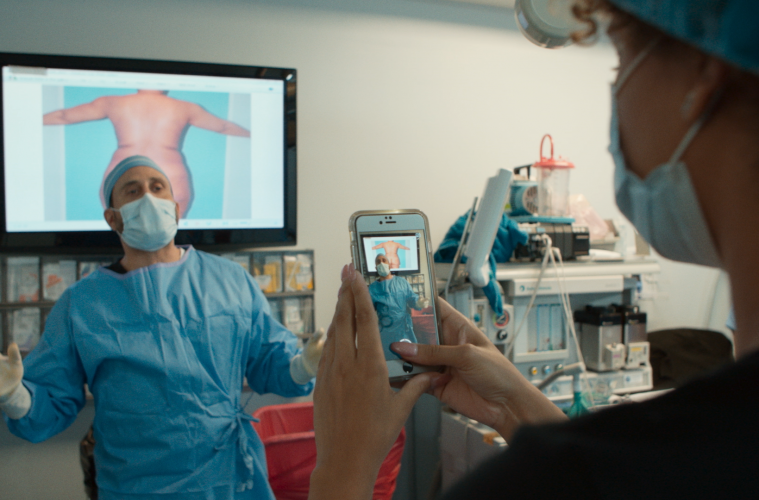 They Call Me Dr. Miami — a glimpse of the famed plastic surgeon’s life beyond social media

In the world of plastic surgery there’s no one more famous, or shall we say, social media famous than Dr. Michael Salzhauer (aka Dr. Miami). The American “celebrity” surgeon has built his practice, his image, and brand in the public eye. Sure, he’s been on talk shows and in multiple media outlets but it’s his daily Snapchat (@TheRealDrMiami) uploads that have gained an obsessive following with millions of views and continues to grow. While he flashes his pearly whites and positions himself as a King surrounded by pretty women through the lens of his phone, there’s also another side to him  — a devoted family man and an Orthodox Jew. That contradiction is what drew us to the documentary, They Call Me Dr. Miami. The film is set to make its Canadian premiere as part of  Hot Docs at Home airing on CBC and CBC Gem this Thursday, May 14.

Dr. Miami doesn’t hide anything he does on social media. Anyone curious about procedures like Brazilian Butt Lifts or Breast Implants can, and will, see it all. He is the first doctor to livestream graphic tummy tucks, breast augmentations on social media. Surprisingly, many of his clients are willing on-camera participants. Yes, it seems as that mere minutes of fame on his account is worth it. And they happily shell out the thousands of dollars to do these procedures with him. They’re also willing to join his surgery waitlist which is reportedly two years long.

Canadian filmmaker and director Jean-Simon Chartier wasn’t surprised. He met Dr. Miami on social media like millions of others. “Before I was at his clinic, I knew about his procedures, live on Snapchat. I’ve seen patients willing to be filmed with their breast or tummy open and their flesh hanging out. I saw some of his silly skits featuring hip hop music and everything else.”

His camera follows Dr. Miami from morning to night and from office to family life.  At first, Chartier said there were no surprises. Initial interviews were more on the surface and what he spoke about were already things he had mentioned in interviews magazines and newspapers. Chartier also knew that he was an Orthodox Jew who observes the Sabbath. He’s married to the woman he met when he was 17 years old. They have five children together. But he was interested in finding out how this devoted family and religious man and Dr. Miami was the same person. That was the starting point for this documentary.

“We talked a bit about his faith and this first block of shooting, but when we got back to Miami for the second and third blocks of shooting, I was able to access his family, his house, his synagogue, etc.,” said Chartier. “He understood from witnessing me shoot daily life moments, and from the kind of questions I was asking when we sat down for interviews, that I was not after the best skit that he could do at the office, but rather looking for authentic moments and in-depth reflections.” 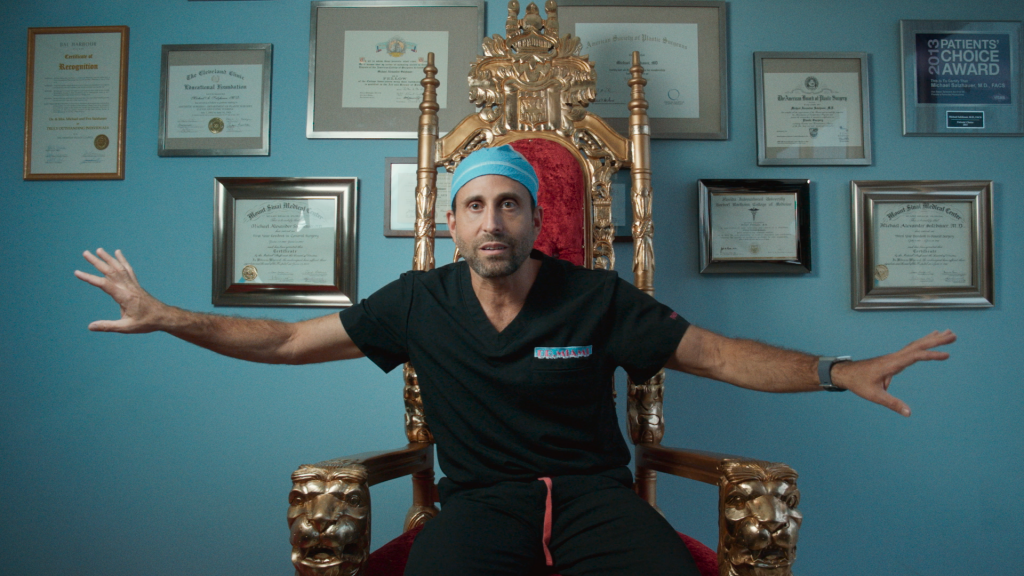 In the film, Dr. Miami explains that growing up he watched M.A.S.H. which set a great impression on him. The camaraderie in the operating spaces was what he wanted in his own practice. And why wouldn’t it be fun and happy? He’s banking on making his clients feel good about themselves.  But all kidding aside, he chose plastic surgery after his girlfriend was left with a scar on her chin after an accident. How does he perceive his line of work? He just wants to make the world more beautiful.

“When Dr. Miami says that beauty is power, or that cosmetic surgery can change lives, I believe that he means it,” said Chartier. “He’s probably right in the fact that a lot of women are gaining self-confidence by being their better self physically.”

Chartier says that he won’t judge the clients and Dr. Miami for that even though he doesn’t agree with a lot of what he promotes and how he does it. 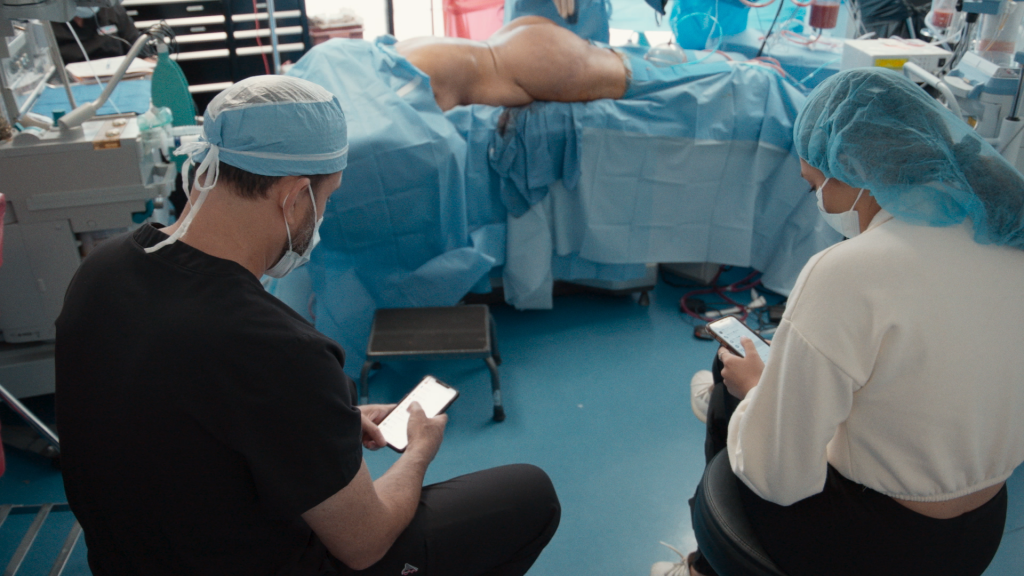 On the more somber side, plastic surgery is a serious surgery and people have died in the hands of those who don’t have the experience or proper credentials. The documentary does show the side of fast and cheaper procedures that can be appealing yet devastating to many.  “It’s a serious thing. There are low cost, unregulated private surgery centres that are responsible for deaths of young women in South Florida. It was important for me to show this reality,” said Chartier.

Part of his fascination, and ours, with Dr.Miami is connected to the phenomenon he encompasses: relying on cosmetic procedures and entertainment to exist in the eyes of millions of young people. “I think that he is a genuine representation of this social media-dominated culture in which we are all taking part, whether we admit to it or not. Whether we are conscious of it, or not.”

And we see this with the likes of self-made success stories including Kylie Jenner, who reportedly has a net worth of $1B (Forbes) thanks to her devoted fans regardless if she’s had any work done, heaps of cosmetics and use of filters. She’s now positioned as one of the youngest and richest in the world. Her medium of choice? Instagram.

“Young women mainly are in competition for likes and followers that make them exist in the eyes of the others. They are seeking recognition, and… love. And they are losing themselves into this constant representation of their best selves. And obviously, Kylie Jenner is no help for them,” said Chartier.

But for the women in Dr. Miami’s life? His wife and his teenage daughter are not swept up in all the gloss and hype. His daughter is not what you would expect. But then again, we didn’t really know what to expect. Daddy has this persona that is really out there and seems like he’s living this lavish lifestyle like a rock star. But she’s not on social media. She knows the downside and how it plays on one’s self-esteem. His wife too, never had any plastic surgery done and portrayed as being quite modest.

We wondered what Dr. Miami’s reaction was when he first saw the documentary.

Chartier tells us that he showed Dr. Miami the film when it was finished. “He said that his daughter (who is quite a critic about him in the film) is the best character! And he said in an interview in the US that it’s the best documentary ever made :-).”

“Michael is a clever person who understands the power of communication and marketing. He is very candid at the same time. I see him as someone who’s trying to find some balance and sense into the different aspects of his life, like we all do,” said Chartier.

They Call Me Dr. Miami will have its Canadian premiere as part of Hot Docs at Home on CBC on Thursday, May 14 on CBC & CBC Gem at 8PM ET (8:30 NT); documentary Channel at 9PM ET/10PM PT. The film will be followed by a special Q&A with director Jean-Simon Chartier and Dr. Miami himself on the Hot Docs Facebook page and on CBC Docs website, Facebook, Twitter and Instagram pages.