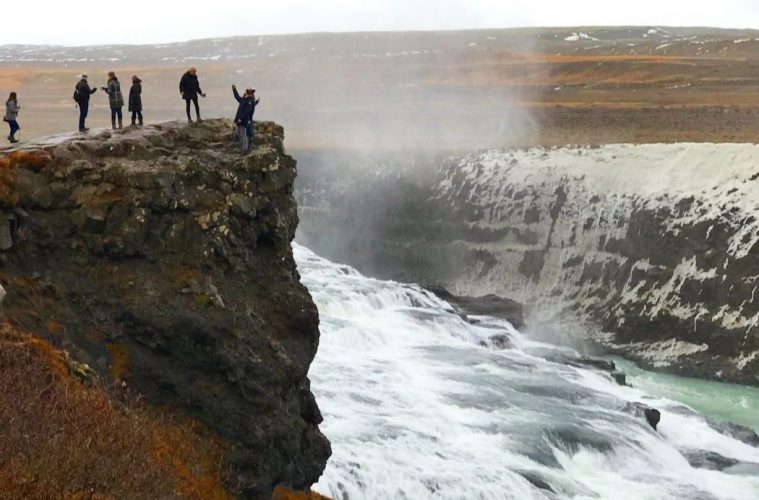 I’ve always wanted to see the Aurora Borealis here in Canada or anywhere. The greenish natural wonder that lights up the skies at night is one of the highlights people hope to catch when they think of visiting Iceland. Given its location your chances of seeing them are pretty good if you’ve got the patience and planning to stay a few days. But what else is there to do in Iceland?

We took a five day trip a couple winters ago (yes, Winter) and stayed in the city of Reykjavik. I honestly was so surprised at just how much there was to see and do! We were happy that we decided to stay rather than make it a layover as most people do when they are  en route to, or from, Europe. Choosing to go in December is beautiful! The city twinkles during the holiday season! We’re already planning to return because there’s so much more that we need to explore outside of the city.

Food Scene: Icelandic cuisine is unique after attending a few tourism events here in Toronto, it really piqued my curiosity. It’s not all fermented whale meat and soups. But you’ll be amazed to learn about the upscale dining scene with some of the most innovative chefs in the world. Hey, you have to be creative in these climates! Iceland has competed at Bocuse D’or and the culinary talents here have garnered international attention. What you should know is Iceland is known for its award-winning lamb, most succulent langoustine and tasty cod. Other interesting culinary findings included puffin, minke whale, and yes, the famous street hot dog. No shortage of higher-end dining experiences. But it’s also not cheap to eat here. Have your credit cards ready everywhere yes, the hot dog stand takes Visa. And the hot dog stand is a must. Even Anthony Bordain went seeking for the famous street meat. But do splurge at Grillið, Geiri Smart, Fiskmarkadurinn (The Fish Market). Head to the Public House for drinks and nibbles (found dumplings and other Asian influenced dishes here that were pretty good). At the time we were there, we didn’t find any fast-food chains.

Blue Lagoon: no trip is complete to Iceland without a trip to a natural hot spring or this very popular geothermal spa. Most people will check themselves into the Blue Lagoon to begin or end their trip. Plan on about 1-1/2 hours in the waters (because your skin will start turning into a prune from being in the water for so long) and slather up with the silica mud masque. The temperature of the water is warm thanks to the heating that happens 2000 metres below the surface harnessed by the nearby geothermal power plant. Strange but true. Best to book in advance and book the package that includes a robe, towel, and flip flops or bring your own. It’s cold out there in your bathing suit. If you plan on bringing a camera or your mobile device be sure to bring a waterproof clear sleeve to keep it protected. Lockers are provided and shower stalls. The tourist destination also houses the Lava restaurant and a cafe if you have time.

Outside of the City: We aren’t joking when we say there are no bad photos here. Iceland is naturally beautiful everywhere. My camera and iPhone were filled with photos and we had only touched upon Iceland’s countryside on a day trip to what they call the “Golden Circle”. Many efficient tours take you to a few highlighted areas including the UNESCO World Heritage site Thingvellir National Park, Gullfoss Waterfalls, and the famous Geysirs that blow every 10 minutes. Once you’ve checked those off your list, go beyond to areas like Vik and the South Coast, go snorkeling in Silfra, go inside a glacier cave or if you’re a Game of Thrones fan, you can check out the filming locations. North Iceland has many valleys and lava fields that are breathtaking. But please be safe when taking those epic selfies.

Arts Scene: There are many museums and galleries to fill your days that range from artifacts to contemporary art installations. Your best deal is to grab a Citypass (that can be found at the tourist information centres) that grants you access to multiple locations because chances is are, you’ll stumble across a gem of an exhibition at any given time. We visited the Reykjavik Art Museums (that actually is three museums set apart from each other – Hafnarhus, Kjarvalsstadir, Asmundarsafn). The city also has great public art installations, sculptures and street art to take in as well.

Yule Lads: December is definitely a worthy month to visit Iceland as the children of the country are more familiar with the 13 Yule Lads. We’ve got Santa but according to folklore, the group of funny trolls descend from the mountains during the festive season in Iceland. It is said that each night one of the Yule lads visit to leave sweets and small gifts (or rotten potatoes if you were naughty the previous day). Each Yule Lad has a special characteristic about them. You can spot them throughout the city and even some animated ones are projected on buildings that makes for a fun scavenger hunt activity.

Icelandic Horses: This unique breed of beautiful horses arrived in Iceland with the first settlers from Norway about 1100 years ago. The horses give me hair envy with their long wispy manes and smaller stature. They are a national treasure with strong personalities. The pure bred and can only be found here. We’ve been told that no other breeds have ever been permitted to enter Iceland.

Music Scene & Nightlife: When I had attended the Taste of Iceland event in Toronto in the Fall, I had immediately noticed the warmth and fun side of the people and their culture. Music, food, and good fun is obvious and most people who have visited Reykjavik can attest that there is no shortage of nightlife that makes this city a hotspot of party revellers. Iceland’s music scene is also strong with several major festivals that are known to attract performers locally and globally including  the annual Iceland Airwaves Music Festival  early November. Be sure to also visit the Harpa Concert Hall while you’re in town as well. You can visit the stunning architectural wonder during the days too.

Coffee Culture: You may be surprise to learn that the coffee culture in Reykjavik is strong. With many worthy cafes to explore in the city, you’ll most likely want to linger in a few. We loved the cafe in the Canopy Hotel where you can order up your espresso based latte, baked good and then sift through their  record collection amongst the many curious items on display and request the barista to play..yes, records. Staff are super friendly and will often start up friendly conversation to see how your visit to the city is going. Also try C is for Cookie.

Safety: Iceland has consistently ranked #1 in the world as being the safest and most peaceful place in the world in several travel magazines as well as the Global Peace Index. Everyone is super nice here.

Daylight in the winter is short: so if you’re planning to take in natural sites and epic photos then you’re limited to hours. At the beginning of December the sun rose around 10:30 am and sun started setting around 3:00 pm. And of course, during the summer months the days are longer with some points where it never gets completely dark.

Water is drinkable: Friends had warned us about the smell of sulphur in the water system at their hotels but we had opted to stay at a newer hotel in the city where the water was perfectly drinkable right from the tap with no scent. Iceland has one of the world’s cleanest ecosystems as it is home to glaciers, geysers, rivers and water is naturally filtered through layers of volcanic rock. 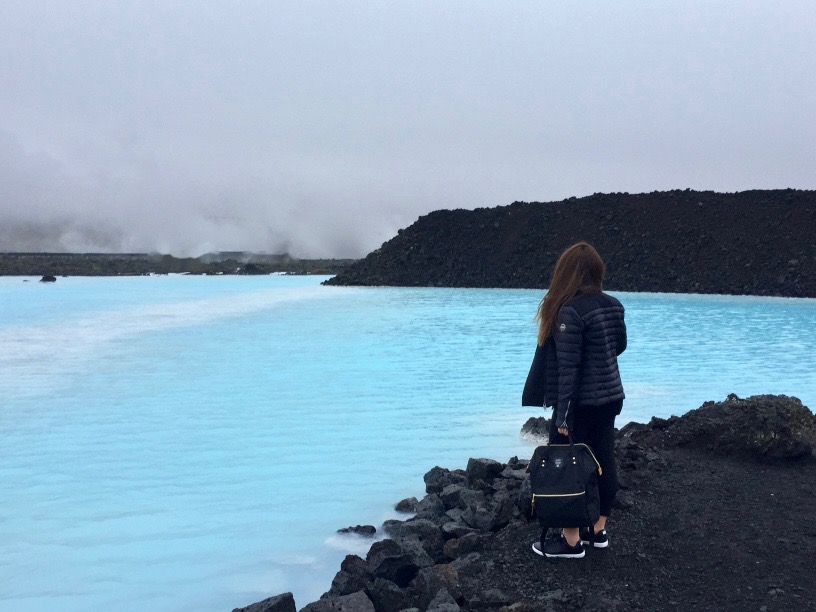 Style scene: While you pack for Iceland and plan on time in the city it’s surprisingly urban chic in feel. No, not everyone is in parkas and massive winter boots in the city…only tourists. While we were there there was no snow on the sidewalks nor was it as cold as it was back at home in Toronto. We gave thanks to the gulfstream that went through Iceland for the better weather when we were visiting. But be warned, the weather is unpredictable. In one day we experienced rain, sun, wind, and then calmness. So, pack your kicks and a city coat as well as boots and a parka for exploring  if you have space in your luggage.

Shopping: There were plenty of Icelandic Wool sweater shops along the popular street of Laugavegur but we really liked the local retailer 66°NORTH that was founded in 1926. The brand specializes in winter wear for everyday life with warmth and style.

Getting around: we walked everywhere in the city at all times of the day and night easily. They have efficient bus service to get tourists in and out of the airport as well as to any tours you may choose to book.

Best time of year to catch the Aurora Borealis: plan your visits later September to early April and even just a 10 minute drive outside of the city on a clear night could grant you nature’s best light show. There are no guarantees and like, weather forecasting, the local meteorologists can analyze if the conditions are good each night. But the more north in the country you venture, the better the viewing. It was overcast each night when we were there but that was okay, we loved everything we had discovered on this trip. And yes, we will go back!