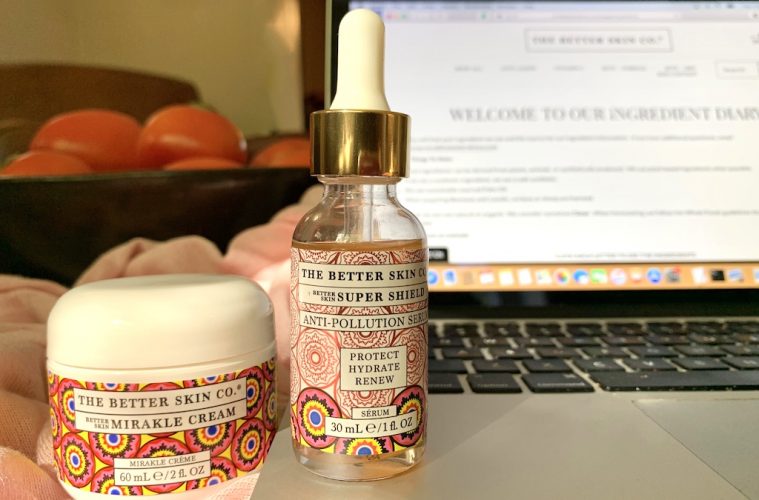 We’ve been home and perhaps sitting in front of the computer just a little bit longer than anticipated. I mean, we’re not travelling to and from work, and if you’re like me, that means getting more time in front of the computer screen. I’m frankly relishing in having more productive time but I never thought about how screen time affects our skin, until now.

We often think about how pollution in the city lands on our skin on a regular day. Check midday and poof! There’s the evidence of airborne dirt landing on my skin whenever I check. But now I’m reading about how the blue light emitted from our computer screens can also wreak havoc on our skin as well.

All that screen time is exposing us with extra unwelcome blue light, the high-energy light that penetrates deeper into the skin than the sun’s UVAs and UVBs causing fine lines. According to The Better Skin Company, excessive blue light exposure from computers, tablets and phones can cause skin damage, including color changes, inflammation and collagen degeneration.

So, yep, another thing to think about.

The Better Skin Co.’s Super Shield Anti-Pollution Serum, is a liquid defense system in a bottle powered by White Horehound (an herb from the mint family) is designed to fight these silent high-frequency nasties all while nourishing the skin with a dose of healthy fortifying ingredients. Turmeric, Eggplant, Aloe, Henna and Pearl Powder all play supporting superhero roles in this light aloe and rose-scented elixir.

But it was the White Horehound that I wasn’t too familiar with. The plant is native to Europe and Britain commonly found roadside and in cottage gardens. The plant usually flowers from June to September. The leaves are often used in teas. It’s also used in lozenge form for coughs, colds and other respiratory issues.

But its familiarity extends into other cultures. The Romans referred to it by its Latin name, Marrubium, and praised the plant for its medicinal properties. Egyptians called this plant Seed of Horus (also known as Bull’s Blood or Eye of the Star). It’s often used as a digestive and when it comes to skincare, the leaves used in powder format is often used in an ointment which is said to heal wounds.

The Better Skin Company , a well-loved “clean beauty” brand that’s famous for its Mirakle Cream, launched the Super Shield Anti-Pollution Serum in April of 2019 and incorporates White Horehound that is sourced in France.

When is the best time to use this serum for optimum efficacy? It’s best to incorporate in your morning skincare routine before spending time in front of your computer. It may also be reapplied throughout the day as it’s great for hydration as well as we head into colder and drier months.

Horehound is not known to interact with other skin care products, but as with anything new, it’s best to do a skin patch test first.

Thoughts? I’m a huge fan of serums!  I’ve recently been using this serum actually in the evenings after I’ve cleansed my face with a gentle wash, followed by a toner (Side note: I’m amazed at still how much dirt is still on my face even though I’m home and only out to walk to the dog during the day). The scent is light. I’m not a fan of rose scents in general but the aloe helps balances the floral.  Noticeably in the mornings after using this serum, my face appears calm and even-toned. I have sensitive skin so I’m always concerned about breaking out with unfamiliar ingredients and hasn’t interfered with the other skincare products that I’ve been using. So far so good. I also like that this serum doesn’t break the bank. As for what it can do with the blue light radiating from my computer screen? I don’t know that we ourselves would notice a difference other than your skin not looking so dull but I do find my skin absorbed the serum fast! I have also been using a few drops on the top of my hands during the day (hey, they get a lot of screen exposure too, so, why not?) and they are feeling soft – again absorbed very quickly.

FYI… In honour of Breast Cancer Awareness Month, The Better Skin Co. is donating 100% of their October proceeds from the sale of their new launch FOR ALL GLOW Primer/Beauty Oil to Hello Gorgeous — a non-profit organization that provides complimentary, professional makeovers and cosmetic education to women battling all cancers.

During Amazon Prime Days (October 13 & 14)  The Better Skin Co. is also offering their products between 30% to 50% off regular price including their VERY popular Mirakle Cream. — the discounted price will show up when you hit the “add to cart” page.