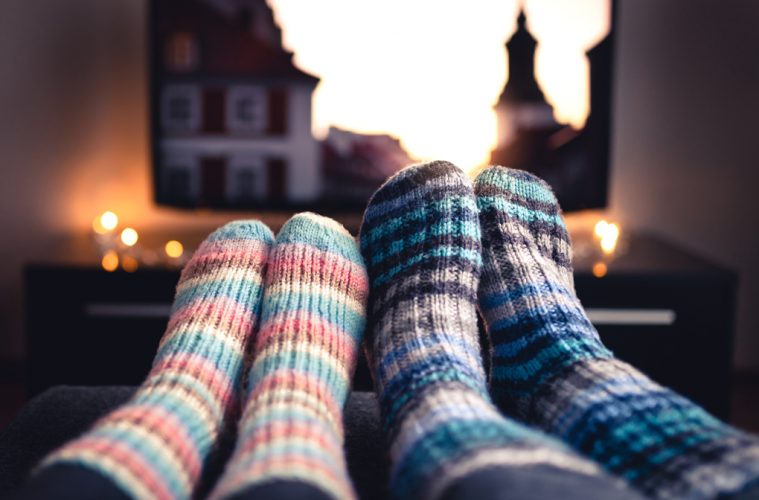 THE AMAZING SHOWS WE ARE BINGE WATCHING IN November

November means cold and probably snow, dark by supper time and THAT means, binge watching tv. Yup, it’s our favourite Canadian winter past time. We took a break in October but here was our list from September, If you need even more inspo. TIme to hop into those onsies, make some popcorn with lots of butter and pour a big glass of wine (or a nice cannabis drink). Without further ado, here is what we will be watching this month:

COME ON. If you didn’t watch season 1, what is wrong with you? Get on that, will ya? If you did, then you are as excited as I am for season 2 of the best show to premiere last year. On October 30, the games will begin again, but this time it’s going down in Italy. Jennifer Coolidge is back, so don’t worry about that but there is a new cast of deplorables joining in on the fun. We have been promised a new mystery to take us through the season as well.

If you love a great BBC police procedural show like I do, you want to watch Sherwood. An all star cast, featuring David Morrisey (The Walking Dead) and Lesley Manville (Mum) lead this crime drama inspired by two actual Nottinghamshire murders that shocked the nation in 2004.

Okay, I don’t even like Christmas themed shows but I love me some Donna Hay. I used to give her book “Off the Shelf: Cooking From the Pantry” to everyone I knew who was moving out and getting their first place. Her cooking is 100% for me. She is like the Australian Martha Stewart expect way more laid back with that relaxed Aussie charm and her food has a great South Asian vibe. I want my Christmas to be all about sunshine and linen and outdoor cocktails too.

She could totally take Martha Stewart in a cage fight. Prove me wrong.

This is the perfect binge watch for those who love old school horror. De Toro has put together 8 spine chilling tales of horror- like a modern day Hitchcock Presents. He hand chose some of the most interesting storytellers in the genre and let them do their thing. This results in a slightly uneven group of short films, but they are all absolutely worth watching. Like all cabinets, some objects are shinier than others, some put back in the drawer while you take others out again and again.

The highly anticipated new season also brings a whole new cast and the story picks up at a time when the Royal Family’s role once again is challenged in 90s Britain. It was also the Queen’s 40th anniversary with her title and new sovereignty changes. Meanwhile on the homefront, Prince Charles puts more pressure on the Queen to allow him to divorce Diana. Rumours continue to swirl about their broken marriage. Then Mohamed Al Fayed enters the scene. I’m all in!

The beautiful story telling and cinematic production brings viewers up close and personal to some of the world’s most incredible chefs. This series focuses on a global favourite food, pizza. The first episode features Chris Bianco, who went from the Bronx to Phoenix with very little skill set. But it was a life changing moment when he was a child that made him appreciate nature gifts. He opened up his own pizza shop and it was a game-changer. Today, Pizza Bianco is considered one of the best in the world by many and the wait is worth it — yes, I ate there recently and yes, it lives up to the hype.

This feature film tells the story of two young Montreal influencers who find themselves in deep water. Having accepted an all-expensive paid luxe cruise vacation seemed like a great way to escape the cold months in the city. All they have to do is post photos on social media and tag the cruise company to show they’re living the best life! A dream “job” really and imagine all the LIKES? Too good to be true? When reality hits everything is at stake. My interview with the actors are coming up soon.

The Villages is one of America’s fastest growing seniors retirement communities. Located in sunny Florida, this complex of cookie cutter homes offers an idyllic lifestyle for those who can afford it. As a self contained society it’s like Disneyworld but for the aging population. They’ve worked hard all their life and prefer to be around like-minded people their age. They just want to have fun without the stresses of the world. While death may be inevitable for all of us, this community wants to just live their best life as long as they can.

It’s easy to mock their preferred active lifestyle of driving in golf carts to their pickle ball, karaoke, dance classes, and gun shooting range but the filmmaker does a great job in presenting all sides. How does this kind of tightly curated (read: controlled) and quickly expanding community affect everyone involved? From those who have lived in the area for many generations to those working to service the community and what about the environment? The ecosystem is being swallowed up along side the growth.

This film premiered at TIFF this past September complete with a flash mob. This “untold true story” stars Daniel Radcliffe as it explores Yankovic’s life from his rise to fame with his early hit wonders like “Eat It” and “Like a Surgeon” to his torrid celebrity love affairs and famously depraved lifestyle.