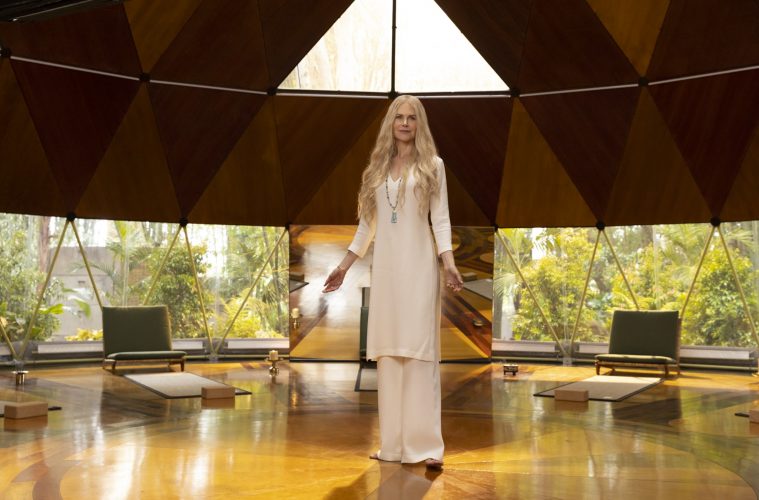 We binged the first few episodes of Nine Perfect Strangers in one big gulp. It’s the most buzzed about show this summer.   Carole and I both laughed, rolled our eyes, and watched with  curiosity. The highly anticipated series recently premiered here on Amazon Prime Video and instantly shot up to number one on the streaming service.

Nine Perfect Strangers is based the novel by author Liane Moriaty. The storyline follows nine people who happen to book a stay at Tranquillum House – a wellness spa & retreat in California (in the series). The cast of characters is diverse with all different reasons for why they booked this escape. Masha (Nicole Kidman) is the host of the retreat that promises transformation to a better form of you.  The guests have a general idea of what this place is about but her side-kicks, Yao (Manny Jacinto) and Delilah (Tiffany Boone), have a secret plan to ensure that no matter how crazy things get, no one will want to leave.

The show caught my attention much like the series Goop Lab (Netflix) with Gwyneth Paltrow and her team of wellness seekers. Wim Hof Method, psychedelics, potions and more are explained through this series and show us how we too can lead a mindful life naturally and organically if we have an open mind, open heart….and an open wallet.

We knew the storyline in Nine Perfect Strangers is fictitious but much of what is woven into the story are elements of wellness thoughts and practices that we are familiar with — eating healthy, meditation, energy healing, gratitude… You get the picture.

The characters are well researched. We meet insecure mom Carmel (Regina Hall) who’s husband had left her for a younger, pretty woman.  The young “influencer” couple (Samara Weaving and Melvin Gregg) who are living the dream in social media but IRL they are far from perfect. Tony (Bobby Cannavale), the ex-football player who’s PTSD is ruining his life. The bestselling author Francis (Melissa McCarthy) on the verge of signing a big publishing deal. The optimistic dad (Michael Shannon), his wife (Asher Keddie) and daughter (Grace Van Patten) looking for an escape. The skeptical journalist (Luke Evans) that questions everything.

When they all arrive at the peaceful Tranquillum House, their phones are taken away and they’re assigned a personal wellness staff member. This is a whole body and mind escape where everything is controlled. Fresh fruit smoothies for everyone!

What the guests don’t realize is they are also getting micro-doses of an “all-natural”  psilocybin in their smoothies (spoiler sorry). According to Masha, psilocybin “cures addiction, it can treat mental illness, it can treat PTSD, schizophrenia, dementia. It can make you eat better, sleep better, f@ck better, and it has the capacity to change the world.” 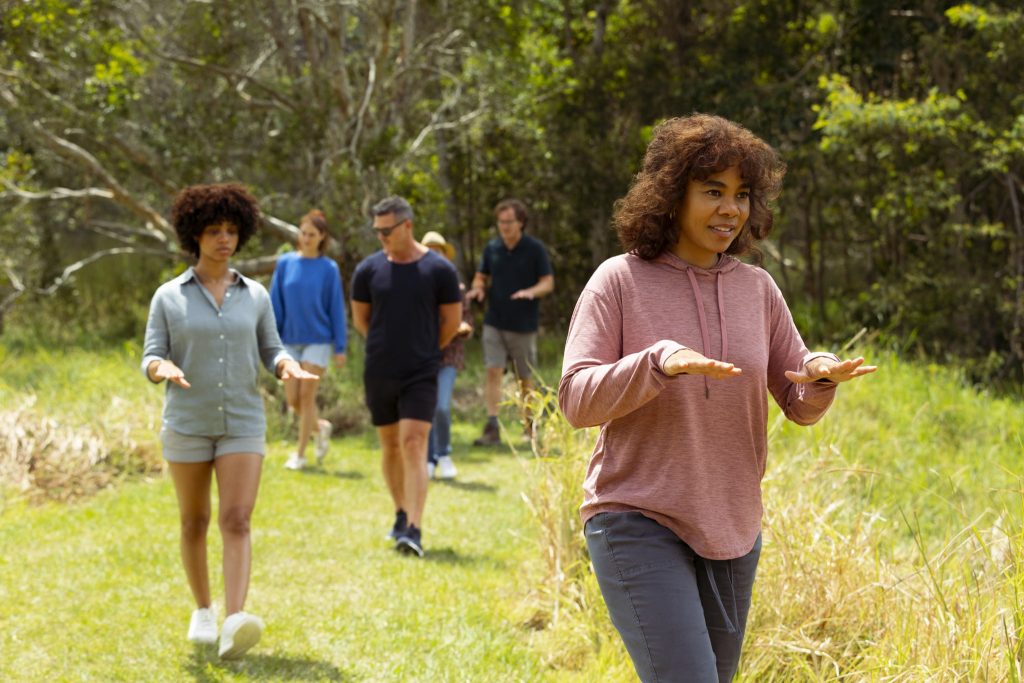 OoOOooKay! Now we have a lot to say about this. Carole and I want to chime in here…

Sonya: So, Carole, what drew you into the show in the first place? For me, I’ve been fascinated about the whole Gwyneth Paltrow GOOP company. We could probably even say she’s got a “cult like following”  buying everything from Jade Balls to help tighten your yaya  and candles that smell like her vajajay (?!). When I first saw the trailer for Nine Perfect Strangers it was an immediate connection. Just look at how Nicole Kidman looks the part. Tell me she doesn’t scream Gwyneth.

Carole: Honestly, it was the actors. I love everyone in this show. Asher Keddie was in one of my favourite Australian series, Offspring and, as far as I know, this is her first big US show. Michael Shannon, Melissa McCarthy, Nicole Kidman, Bobby Cannavale – HELLO.

I think Kidman appears to be going for a Disney Elsa princess side hustle vibe here. As a makeup artist, I CANNOT abide that stringy wig. I am not sold on the accent and I think it would have been smarter to change her character’s background to make her, I don’t know, Australian or something.

Sonya: I agree. Kidman’s accent was a bit of distraction. What’s the Russian connection? Maybe there’s something coming up in a future episode that would tie that in for us.

I admit there are times that I want to escape to a wellness retreat maybe in Costa Rica, Utah, Sedona or Ojai? Anywhere that’s far and feels remote, you know? You know, the ones where you cannot talk to anyone? or one that you get to hang out with a Shaman. Those who know me personally wouldn’t be surprised, I guess. I’ve always been intrigued but to give up my iPhone for 10 days? I’m not sure I can do it but I guess that means I need a serious tech detox.

Carole: Yeah, not for me. I have no desire to find my bliss. My bliss would be 10 days wandering around Southern Italy, drinking lots of wine, eating seafood and swimming in the ocean with my iPhone glued to my hand. There was a time I was a devoted yoga practitioner and I did flirt with the idea of doing a yoga retreat but I think I knew I would hate it once I got there.

Sonya: Okay, Carole, we know you’re a well-known chef in the city who cooks with other “natural resources”. What are your thoughts on the microdosing in the series?

Carole: Since I actually teach people to cook with cannabis and cater private cannabis dinners, we all know I am okay with this. Am I okay with doing so without the knowledge and consent of the participants? Absolutely not – this is was the most unbelievable part for me. Not one person got pissed off, grabbed their shit and left after finding out they are being secretly drugged, their belongings have been gone through and their things confiscated. Give me a break.

Sonya: Yeah, I guess they were already “in” and feeling the effects and for the most part everyone was feeling groovy. For a moment I thought “who on the series has an invested interest in psilocybin?”

Who’s your favourite character in the series? I find Yao fascinating although he does remind me of a friend of mine. But I gotta say I love Melissa McCarthy. I also thought the influencer young woman was well casted. Her character is BANG ON. I mean, her phone was taken away and that whole sense of “if it’s not on social media, did it really even happen?” is part of the world I’m surrounded by. Her whole FOMO thing shook me.

Carole: I think that all of the actors are amazing. It is what keeps me watching this train wreck, to be honest. Michael Shannon, Asher Keddie and their daughter are heartbreaking and relatable. The influencer chick and her husband have not been fleshed out enough at this point for me to care about them as a couple, but I agree that she is perfect. My favourites are Melissa McCarthy and Cannavale and I am enjoying their interaction on screen and am sensing a real connection building between them.

I just can’t with Kidman. This is the first time I have seen her in anything and thought “I’m just not buying it lady”

It sounds like I hate this show but I also love it lol. I am not quite hate watching it because the acting is too good but I definitely have some feelings.

Sonya: I’m not sure I have enough to go on with Kidman’s character but I agree, I can’t turn away and anxiously waiting for the next episodes to drop. I love her line when one of the characters asked if she was crazy and she replied with “just the right amount of crazy.”

I feel like this series can go wayyyy crazier and it should. Right now it’s just scratching the surface and playing safe but they could really dive deeper.

Carole: I am banking on batshit crazy and am anxiously awaiting the next episode to see what’s next? We have already had a goat sacrifice, so that’s off the list…. Definitely getting a bit of a Midsommar vibe though so who knows what will happen this week?