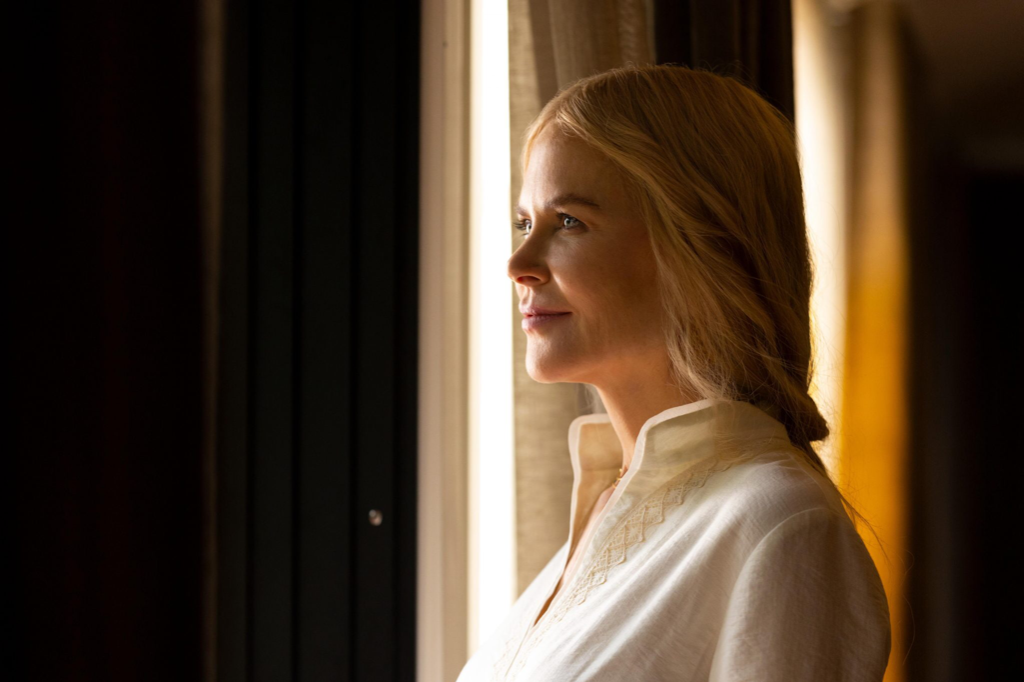 In episode 6, the drugging is ramping up and the drama in Tranquillum House is also ramping up for some while others seem to be actually benefiting from all of this unconventional “therapy”. Sadly, their leader, Masha (Nicole “Elsa” Kidman) appears to be one of the people who is slowly unravelling, which does not bode well for the group. We are treated to more flashbacks for Masha, including one of her witnessing a girl, who appears to be her daughter, being hit by a car (sorry, spoiler). If Masha is a mother who is suffering from the horror of losing a child, I felt like this was a big clue as to why the Marconi family were invited to this place that is clearly out of their financial range. We are slowly seeing that Masha has invited/accepted each of the nine for for self serving reasons.
Episode 6 picks up the day after Zoe’s 21st birthday party.

“I did not come here to have a Lilliputian-sized Internet hustler sing show tunes to me from the toilet.” ~ Francis

Carole: I am getting sucked in now and am no longer hate watching . Don’t get me wrong, I still hate the wig but Masha is revealing herself to be a very messed up guru! And I am here for that. LOVE the romance blossoming between McCarthy and Cannavale (Francis and Tony) is giving me life and I buy every ounce of chemistry between these two lost souls. I still don’t really care about xxxx but finding out about Masha and Carmel’s husband hints that there will be some serious fireworks by the end of their season and tells us why Carmel is here.  We also know that Lars is here so he can give some free PR for Tranquillum House. By the end of the next episode I hope we are told the backstory about the others and why they were selected. How are we feeling about the slow roll out of puzzle pieces, as far as who is there and why?

Sonya: Oooooh yeah, this episode had a lot of substance. For me, Carmel is the one to watch. Regina Hall is absolutely incredible in this role!  It felt like many of their fears were brought to the forefront and the hallucinations are over the top. Tony’s fear of hurting those he loves and influencer girl’s fear of losing her looks –now THAT was funny! It was a field of landmines. Masha is racing in two directions — she’s racing at light speed forward and yet running away from something else. It’s an interesting extreme with her and I’m still confused but I love trying to piece-meal all the moving parts.  I seriously dig that sound bath though.

Carole: As a mom, the scene where Heather Marconi realizes that she didn’t take the side effects of her son’s new meds seriously and might, in some way, be responsible for his death, was heart wrenching. God, she is a good actress. I kind of feel like the acting in the show transcends the writing and whoever cast this was a genius. I wanted to bitch slap Napoleon for his quick flip flop from his own feelings of guilt to going in, a little too enthusiastically, to blaming his wife for their son’s suicide.  Didn’t really need more puking, but that’s just me.

Sonya: yeah, that puking was too much for me! But I guess that’s how the writers are trying to work broadly how different people react to drugs of any sorts. That would probably be me. lol. It’s an interesting twist to think of the possibilities of having someone who you know has passed away come back as a reasonable facsimile. I remember seeing documentary this past year about the possibility of AI offering that feeling of immortality. I would bet that even though Heather may feel like the possibility of bringing her son back to life, he may not be the dream son she envisions. But what about Delilah and Tao? She’s not exactly drinking the same Kool-aid anymore.

Carole: You know, I wouldn’t want that. I think nothing good comes of that sort of messing around. I miss my mom like crazy but I think taking drugs to conjure up an illusion of her would not be helpful. I think Masha wants to use them -specifically Zoe- to help her bring HER dead daughter back (assuming that the flashback to the little girl who gets hit by a car is her daughter and she died). That’s creepy and should be left alone. Haven’t we all watched enough horror movies about bringing back the dead to know that it is always a terrible idea? Have these people not watched Pet Semetary?

I am also angry that, with 2 episodes left, the show has finally sucked me in and I am starting to kind of care enough to see what happens. Will Francis and Tony find true love? Will Carmel lose her mind and stab Masha in the Elsa wig with a giant fork? Will influencer girl finally lose her nose? Okay, the fact that neither of us remember her name on the show is telling.
All in all, I am now almost all in and kind of can’t wait to see what happens next week. Hopefully less vomit, more intrigue.