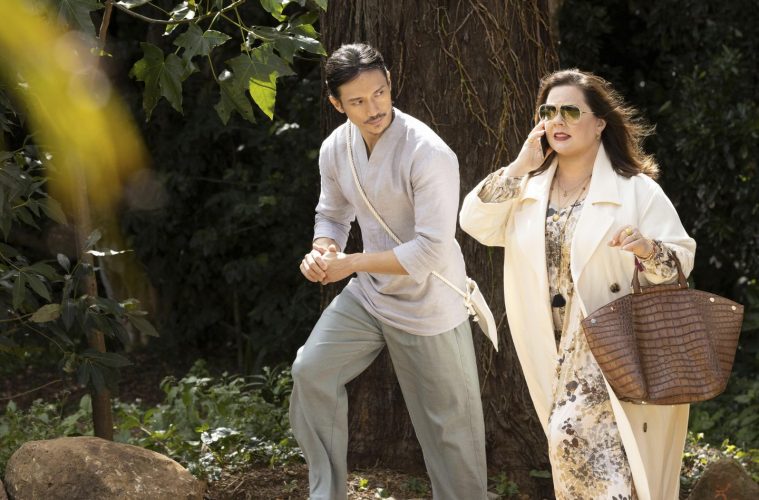 In Episode 5, all the guests at Tranquillum House now understand that they are being served a daily micro-dosed smoothie that includes psychedelics. They are choosing to stay even learning that they were being “drugged” without consent. With Masha (Nicole Kidman) leading them in their “transformation” journey it doesn’t come without oddities and a load of questions. We still are foggy about her character’s story. At this point, we know she use to have a big corporate job but faced death in the eyes. We could safely say that it was a life altering experience for her character. This episode seems to focus on dreams and hallucinations. Zoe celebrates her 21st birthday and we continue to see Carmel unravel as more things are triggering for her.

You have all come here to die. I will bring you back. ~ Masha

Okay, last week, Sonya and I binged the first four episodes so we could start our conversation about this Prime Original. I think I made it pretty clear that I have issues with it and I am not sure that episode 5 changed my mind.

I still cannot buy Kidman’s Russian accent, I refuse to even discuss her Dollar Store Elsa wig and I am still unconvinced that we are supposed to believe that not one participant would have left by now.

Carole: Okay, all that is out of the way. What I did enjoy was the growing chemistry between McCarthy and Cannavale. I am also kind of happy that they do not make her weight an issue for her. She is all about insecurity but it’s wrapped up in her work, her talent and her relevance as a writer. I have always hated seeing McCarthy pigeonholed into roles that either mock her size or use her size to make her tragic, like it’s inevitable that if you are not a size 2, you can’t be a love interest. Sonya, what is keeping you watching this moderate train wreck of a show?

Sonya: OMG I totally agree with you about McCarthy. Quite honestly, I hadn’t even thought about her weight. She’s just so amazing in her craft. And yes, the blossoming relations with Cannavale seems actually quite natural and not forced. I’m hooked on this show. Everything about it. I’m always curious about “alternative healing”. I admit that early days of Goop, which this series totally reminds me of, drew me in. The intense vibrations shown in this episode between Yao and Delilah? I was skeptical about this method (explained in the Goop Lab series) but my curiosity still leads.

Sonya: Uh, yeah. I’m living in flowy these days. Covid “19” is real. lol But I still don’t get Masha’s story. Her trauma keeps coming in bits. I don’t feel that invested in her character…yet. But it IS Nicole Kidman so I’m still holding on.

Carole: I was hoping for some really crazy train action and we are not there yet. The only thing that will redeem this show, for me, is if it manages to go completely off the rails so we can enjoy some really juicy performances from all of these fabulous actors. More forks stabbed into the woodwork and men giving birth please.

Sonya: Lars is hilarious! But I would totally keep one eye behind me if Carmel was around. She’s just bubbling and simmering. I think she’s going to explode and it’s gonna be ugly. So, Episode 5, there was more focus on dreams and hallucinations. Have you ever experienced anything like that? Okay, I take gummies (CBD+THC) once in a while but I’ve never had anything vivid like what they showed in this particular episode. I mean, depending on the dosage and I’ve managed to cautiously learn what works for me, I can feel like I’m floating but it never gets farther than that! But there was one time when I thought someone was knocking at the door but I quickly realized that it wasn’t real. I know my limits and I’m in complete control. Here they are completely trusting of Masha to microdose them????? But then again, I’m not totally surprised — there are many people who will trust others and believe that their best interest is at heart. They won’t bother to actually do their own scientific based research or question?

Carole: In my younger years, I had a good amount of experience with the magic of mushrooms and I dont’ recall actually hallucinating. I found it that it made me see things so clearly, things that I was not allowing myself to deal with until I was under the influence of mushrooms and, unlike other types of high, I would wake up with a real clarity and all of the intense realizations from the night before still made perfect sense. That is why I am on board with the idea that micro dosing with psilocybin reasonable. I DO recall being able to listen to intimate conversations occurring on the opposite end of a very crowded party once – maybe that was a hallucination lol.
I am also awaiting a deliciously violent breakdown from Carmel. She is a hot mess and doesn’t seem to be having the same, positive response to whatever drugs they are giving her, unless Masha’s aim is to push her over the edge.
I was intrigued by the flashbacks of, what looked like, an older man dying during one of their rituals that appeared to traumatize Delilah. I am sure we will find out what the deal is there soon.

Sonya: I was seriously hoping that it would start to get crazy. I can feel it coming but it’s still cautiously unravelling. There are three more episodes coming in this season. I’m waiting for the audiobook to become available on my Toronto Library “Libby” app so I can compare.

Carole: I might read the book after the show ends because I have read that the show really deviates from the book and I think it might resonate more, for me, in book form, so I don’t have to be distracted by bad wigs and accents. Okay I know I said I would be bringing up the wig, but come on. Looking forward to next week, which shocks me a bit.