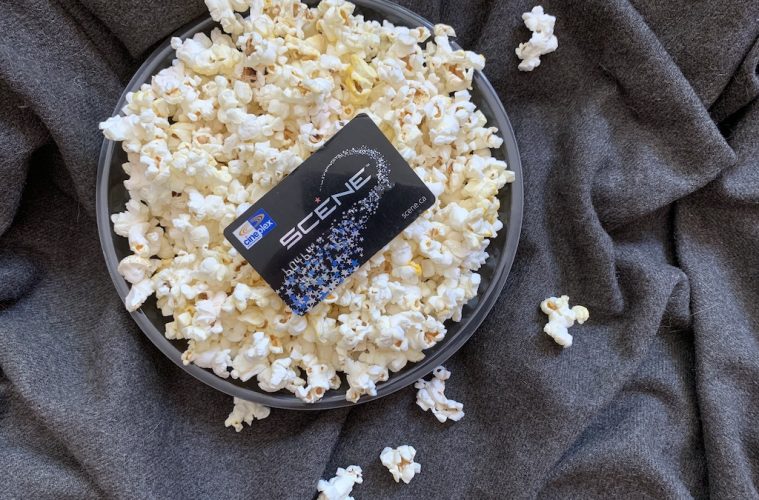 We’re missing our nights out with big buckets of popcorn at the movie theatre.  My SCENE points card hasn’t seen any action since March and while my points sit waiting for me to comfortably dive back in, I learned that Canada’s #1 loyalty entertainment program has found more ways for us to not only earn and redeem points but also to reconnect us for a Night In or Night Out with friends and family!

Yes, we can download the latest Hollywood films directly from the Cineplex Store to stream in the comforts of home and still earn and redeem points! Now that time is on our side, we’re getting to our “must-see” list that we can’t find anywhere else.

Now there are even more ways to use your SCENE card…and you’ll actually be doing something good! For every transaction from now until August 27, SCENE will donate $0.25 to the Boys and Girls Clubs of Canada . This will be helping children and their families spend quality time together! So far, $135,988 (as of August 14) has been donated in their #BetterTogether campaign! Learn more here.

There are also exclusive deals at Cineplex theatre locations that have safely re-opened, including $5 movies and 500-point offers for SCENE members.

You can even watch an NBA game at a Cineplex theatre with all proceeds go to the Boys and Girls Clubs of Canada. SCENE members earn 50 points here!

If you’re not quite ready to step out yet… Here are some movie “night in” ideas we’ve recently found on the Cineplex Store:

THE SECRET: DARE TO DREAM: Making it’s Home Premiere starring Katie Holmes and Josh Lucas. Miranda Wells is a hardworking young widow who’s struggling to raise three children on her own. A powerful storm soon brings a devastating challenge and a mysterious man, Bray Johnson, into her life. In just a few short days, Bray’s presence reignites the family’s spirit — but he carries a secret that could change everything.  Here’s the trailer…

THE HOBBIT Trilogy and THE LORD OF THE RINGS Trilogy: Experience Academy Award-winning director Peter Jackson’s Middle-earth trilogies from beginning to end. This collection includes all six Middle-earth films in their theatrical versions. The Hobbit Trilogy – Bilbo Baggins is swept up into an epic quest to reclaim the lost Dwarf Kingdom of Erebor from the fearsome dragon Smaug, in the company of thirteen dwarves and the wizard Gandalf the Grey. Along the way, the adventurers encounter trolls, orcs, goblins and the mysterious Gollum. The Lord of the Rings Trilogy – The Trilogy tells a story of a meek hobbit of The Shire and eight companions setting out on a journey to Mount Doom to destroy the One Ring and the dark lord Sauron.

STAR WARS: The Skywalker Saga: is a 9-movie collection worthy of a rainy weekend marathon. All nine movies of the Star Wars Skywalker Saga available for the first time in one collection. From young Anakin Skywalker’s descent to the Dark Side, to the rise of the epic Rebel Alliance and its efforts to protect the galaxy, the story of a generation comes to a riveting conclusion.

Trolls World Tour: for families who love to get up and dance along to the tunes as the Trolls save the day. Poppy and Branch discover that they are but one of six different Troll tribes scattered over six different lands and devoted to six different kinds of music: Funk, Country, Techno, Classical, Pop and Rock. Their world is about to get a lot bigger and a whole lot louder. A member of hard-rock royalty, Queen Barb, aided by her father King Thrash, wants to destroy all other kinds of music to let rock reign supreme. With the fate of the world at stake, Poppy and Branch, along with their friends — Biggie, Chenille, Satin, Cooper and Guy Diamond — set out to visit all the other lands to unify the Trolls in harmony against Barb, who’s looking to upstage them all. Stellar cast with Anna Kendrick, Justin Timberlake, James Corden and others.

INTERNATIONAL AWARD WINNERS: Look for critically acclaimed films and have a virtual film night with friends and family. We highly recommend watching  PARASITE, by Korean filmmaker Bong Joon-ho – 2020 Oscar Winner for Best Picture and Best Screenplay. Ki-taek’s family of four is close, but fully unemployed, with a bleak future ahead of them. The son, Ki-woo, is recommended by his friend, a student at a prestigious university, for a well-paid tutoring job, spawning hopes of a regular income. Carrying the expectations of all his family, Ki-woo heads to the Park family home for an interview. Arriving at the house of Mr. Park, the owner of a global IT firm, Ki-woo meets Yeon-kyo, the beautiful young lady of the house. But following this first meeting between the two families, an unstoppable string of mishaps lies in wait.

Take a look at the official SCENE site to see the offers for your next night in…or out!