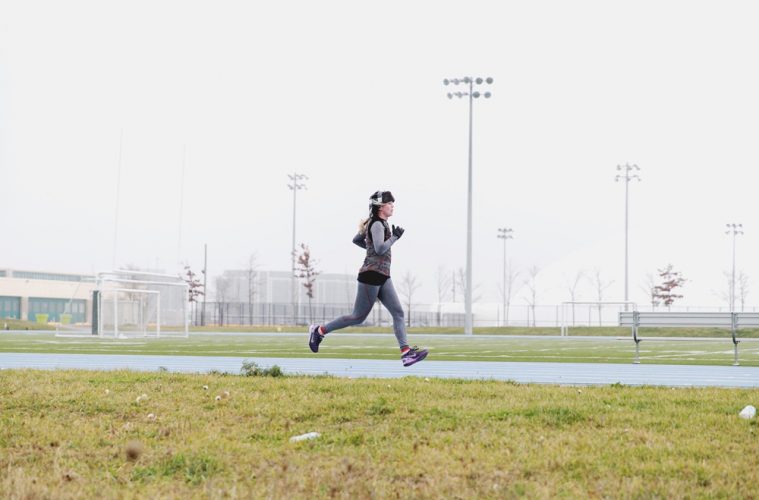 Running from my Problems

I’ve always been a runner. I’ve always had problems. This doesn’t make me unique, special or different in any way. Ask any runner why they run and it’s inevitably equal parts therapy, workout and maybe a little bit of an escape too.

Running started for me in track in grade three, regionals, mini-competitions that netted mostly ribbons and high fives. When I was sprinting in track, I couldn’t hear anyone making fun of me, I wasn’t thinking about my shitty ass home-life, I felt free, almost close to flying.

I started 5K’s with my Dad when I was 10. The races were fairly competitive, bibs, medals and times mailed out to you months and months later. That first year, I beat both my Dad and older brother, and with it printed for posterity, well, it cemented my love of the sport.

Fast forward decades, and I’m still running. Until, I wasn’t. Couldn’t might be a more accurate word though. I’m not going to grandstand and glorify running through pain, if you’re a runner, you’ve run through discomfort. But I did it for years, not realizing the damage that the half-marathons and really, mostly the training for those, was doing to my body. My post run routine adapted well, ice packs, heating pads, a hot tub, and maybe an Advil and I felt back to normal in a day or three. Training for the Brooklyn Half Marathon I consulted with my Chiropractor who would chalk it up to foot strike, and yeah I already had orthotics, but something was still very wrong. I wore Nike compression gear, socks, compressed e’rything from the waist down, and got it done. I felt great after, had a massage the next morning and felt a million times worse. That was May 2016. 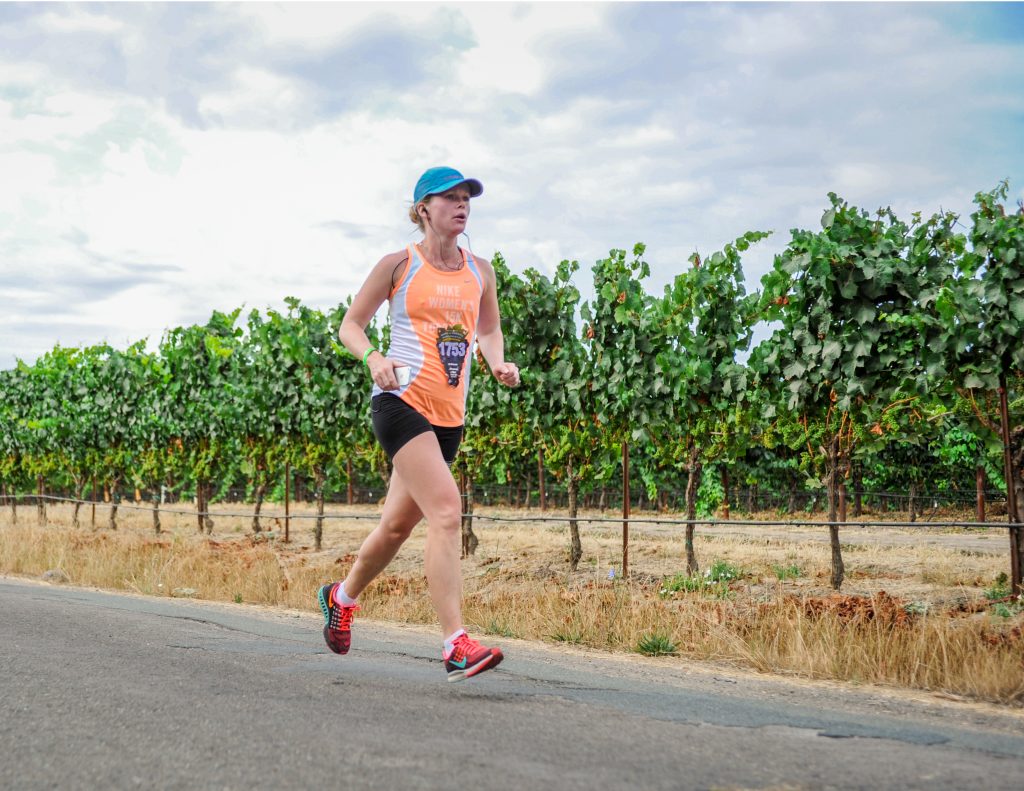 From the Napa to Sonoma half marathon

So, I kept running, shutting the pain out. Playing sports, like baseball and floor hockey meant more running, sprinting and awkward jaunting movements that would leave me wincing in between plays. But, I kept running. Because I didn’t know any better. Running was coping, and if I wasn’t running, I wasn’t coping. Race after race, run after run, meeting new people and making runner buddies (thank you NRC) meant I was logging some serious km’s a week, and socially, I started engaging with this community almost more than my IRL friends. And while my grown-up life is thankfully drama free, I still relied on running as an outlet for my every day anxieties.

And then it ceased to be an option anymore. Running was the glue, it kept me together. On my own, I was free falling.

My symptoms got worse when I started losing sleep. Even on ‘off days’ I was in pain now. A family vacation down to Turks and Caicos should have been a dream, but it was a total nightmare. That was the peak of my pain, even though I wasn’t even running. I barely slept that week, tossing and turning and haunting the hotel room were the only forms of exercise on deck that week. And that was when I knew I had to get help.

X-rays proved I had a broken back- my sacroiliac joint was fractured. The SI joint as it’s commonly referred to supports the lower back, it’s primary function is to absorb shock and pressure. My doctor, knowing I was a distance runner immediately asked if I cover any hill work (Yonge and York Mills was my route) and told me not to run on hills, concrete or a host of other things that I sort of tuned out. 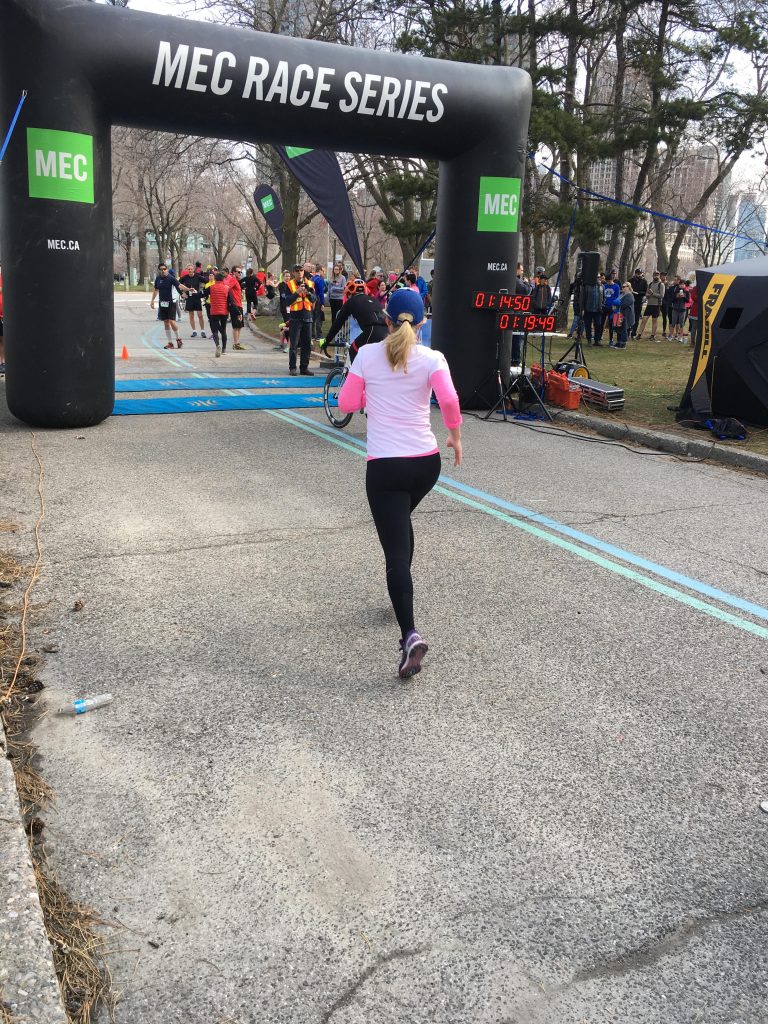 I was days away from my first run of the season, The MEC 15K, and little did I know it would be my last run too. I ran, wincing and quietly moaning under the thunder of my earbuds. I finished and went home, ugly cried in the bath tub and realized that my running days were behind me. Sidelined with injury, my worst fears were far from over. Routine blood work showed something far worse, and after eight rounds of bloodwork, 6 months of heavy pain killers and anti-inflammatories the medical team and specialists were thinking it was a particularly nefarious form of arthritis, Ankylosing Spondylitis, where your spine fuses into itself. Treatment options are limited. You lose mobility and not running was the least of my problems. After watching my own mother suffer my entire life with debilitating MS I was beyond depressed at the prospect of kids witnessing the same decline. Fortunately, after meeting with a specialist and going through more bloodwork, X-Rays, poking and prodding, after eight months I was cleared. The litany of tests were thankfully wrong- I was stuck with a busted up SI joint, and arthritis in my lower back, but no crippling disease that was going to sideline me from my life and family. To say I was elated was a complete understatement.

It’s been a year since this journey began. A year of not running, not sharing posts on social media, not running with my runner buddies. It’s been hard. I have come to realize that many of my friendships were rooted in running. Without that bond, without those miles tying us together, we maybe didn’t have all that much in common in the first place.

So, while I’ll never run that ‘big’ race again, I will still chase my kids through the park. I’ll still be Team Captain for my Terry Fox team. I will play baseball with my team of five years (Go Just a ‘lil Poke!). I will define myself as more than just a runner. I didn’t lose out on running, I gained perspective on what is really important- my health.