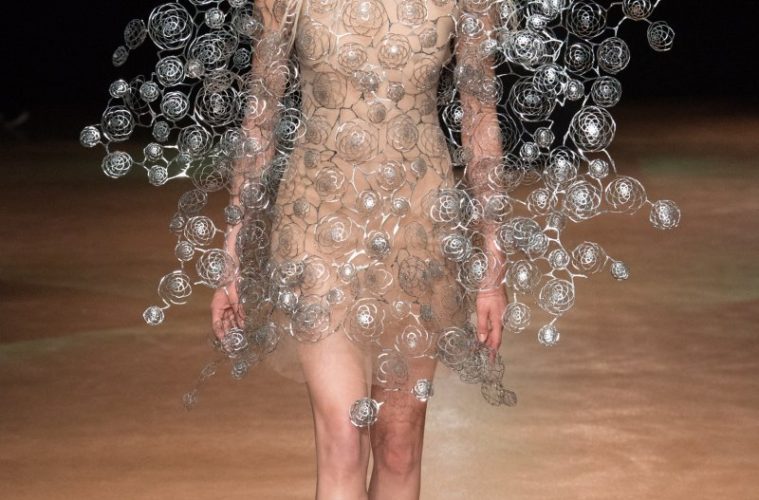 Exciting news in the museum front. The Royal Ontario Museum announces the acquisition of Iris van Herpen’s Dome Dress from the Dutch fashion designer’s Fall 2017 Aeriform collection. The piece was commissioned exclusively for the ROM and was purchased with the generous support of the Louise Hawley Stone Charitable trust.

The dress was designed in collaboration with Canadian artist and architect Philip Beesley, and will be on display during the Iris van Herpen: Transforming Fashion exhibition opening June 2, 2018 at the ROM.

The collaboration is both fashion and sculpture – a gravity-defying silhouette floats like a suspended silver cloud that looks weightless. The dress is made from over 300 zinc-coated steel, laser-cut forms, hand moulded into three-dimensional domes.

“The Aeriform collection explores the relationship between the body and its elemental surroundings: between water and air: between our inside and outside: and between darkness and lightness,” said van Herpen in the official press release.

With nature as a muse, the lace-like domes mimic bubbles of air that reflect light and billow around the body. The Dome Dress from the Aeriform collection was presented at Paris Couture Week marking the designer’s 10th anniversary.

The Museum has also commissioned a documentary by fashion filmmaker and art director Stylianos Pangalos. The film follows van Herpen and Beesley’s collaborative process from inception to creation and to the final reveal on the runway in Paris (2017).

Iris van Herpen: Transforming Fashion will be on view June 2 to October 8, 2018 and will showcase the evolution of van Herpen’s leading -edge design with one-of-a-kind pieces from 15 collections spanning 2008 to 2017.