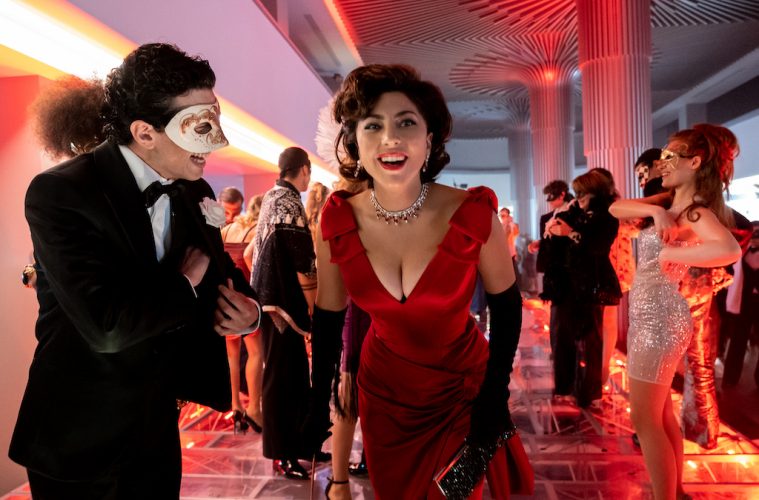 Every family has drama but the Gucci’s was next level. Control of the brand, vision, and direction was tumultuous. Keeping it in the family? Nah. Inspired by the true story of the family, House of Gucci offers us insight into a the family’s history along with who did what to whom full of scandals, backstabbing, deceit, and betrayal to keep the luxury brand from sinking into the abyss of “whatever happened to…”

So, what happened in the film? Here’s what we learned…

House of Gucci was based on the 2001 book  The House of Gucci: A Sensational Story of Murder, Madness, Glamour, and Greed by Sara Gay Fordern and” inspired by” the family’s true story. It leads in with a determined Patrizia Reggiani (Lady Gaga) who meets Maurizio Gucci (Adam Driver), grandson of Guccio Gucci, at a party. When she met the soft spoken and shy young Gucci, he said she looked like Elizabeth Taylor to which she replied “I’m much more fun.”

With eyes wide open, she quickly turns her stiletto heels on a mission to marry into one of the most famous Italian family owned fashion houses to secure her future. A far cry from her humble beginnings working in the accounting office at her father’s trucking business.

Maurizio’s widowed father, Rodolfo Gucci (Jeremy Irons) who was a film star in addition to having a hand in designing for the label, was less than thrilled with his son’s growing love interest in Patrizia. He felt she was a gold digger and potential social climber. But when Maurizio decided to turn away from the family fortunes and future responsibilities, he showed up at Patrizia’s door professing his love…without the money or job. 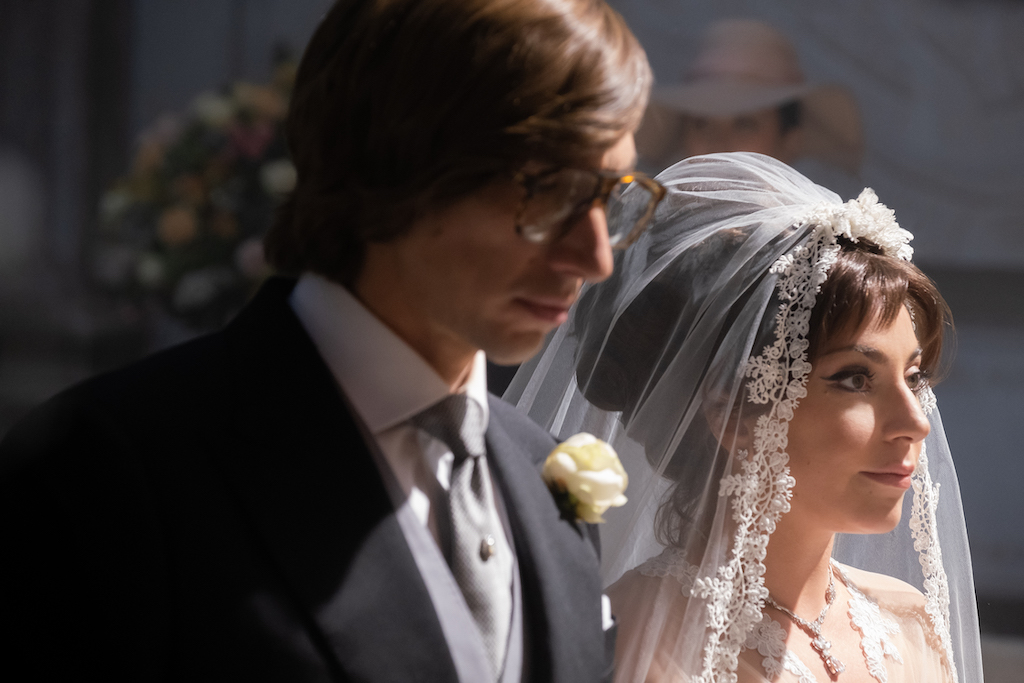 Maurizio had originally wanted a career in law. But with his father’s death he was convinced by his uncle Aldo Gucci (Al Pacino) to return to the family business.

Patrizia yearning for the glamorous life thrusted her husband back into the family business. Initially Maurizio was uninterested but when she positioned how his return would keep the brand’s image and legacy from the wrong hands and to secure the future for their daughter (only one was mentioned in the film), he agreed.

Meanwhile his cousin Paulo Gucci (Jared Leto) who was considered an outcast of the family, dreamed of designing under the label however the family felt his vision didn’t fit the classic Gucci aesthetic. Pastels and browns? Nope. The Guccis were quite vocal about their distaste for Paulo’s design concepts. Eventually he branched out on his own. 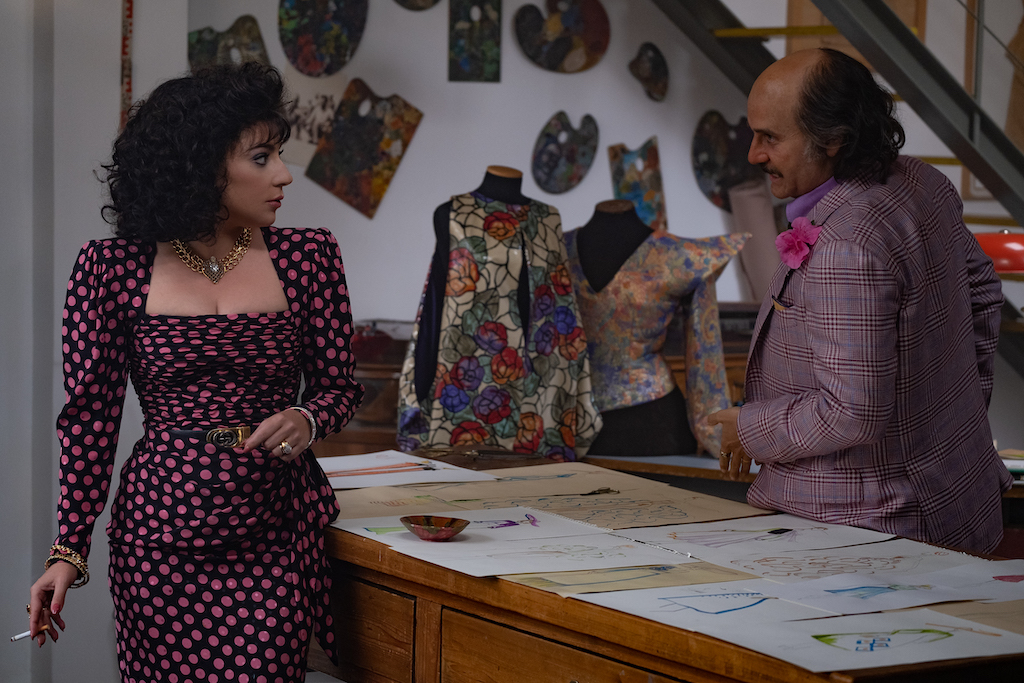 Patrizia had a very outspoken personality. When she saw the fake Gucci products on the streets of New York, she brought it to the attention of the family. She was shocked at how the family reacted. Zio Aldo felt that it didn’t impact the brand but felt if the average housewife wanted to have the feel of Gucci even though she cannot afford the real thing, what is wrong with that? Maurizio in the film joked about how good the fake goods looked and that maybe he should buy them — a reference to Patrizia, perhaps?

They’re not fakes…they are replicas.

Ultimately, the fakes as well as licensed goods did bring down the cache and exclusivity of the brand to the point where no designer wanted to be associated with it. Gucci had lost its lustre and it was at its lowest point in history. It wasn’t until they had signed on a young and exciting Texas-born designer named Tom Ford that the Gucci brand shifted and made its returned to the spotlight. This chapter in Gucci’s history is worthy of a film on its own!

It’s well known that Maurizio had an affair but Patrizia’s realization of the relationship with his long time socialite friend, Paola Franchi, unraveled her. Confrontation ensued with Patrizia slyly telling Paola that she was teaching her daughter a lesson about not taking things that don’t belong to her. MEOW!

Patrizia’s marriage with Maurizio deteriorated. In the real life story, we had learned that Maurizio and Paola lived together for five years and when the divorce with Patrizia was finalized, they began planning their own wedding.

Patrizia began to confide in a psychic — who ends up milking as much as she could. When Patrizia decided to step up from having psychic Pina (Salma Hayek) casting spells to hiring hitmen, she made a funny comment about maybe waiting until they returned from the Caymans.

We know how the story ends. In 1995, Maurizio Gucci died from a gunshot.

Today, there are no actual Gucci family members involved with the brand. Since 1999, Paris-based corporation Kering owns the luxury brand reportedly worth €9.62 billion (2019). They also own Balenciaga, Alexander McQueen, and Yves Saint Laurent.

And by the way, the Gucci brand is currently celebrating its 100 year anniversary!

Additional thoughts on the film…

I really enjoyed the 70s and 80s vibe to the film from the clothing to the music. The disco era also brought on feels of douchie-soft-porn. Director Ridley Scott may have emphasized the tackiness with intention. I’ll go with that.

Al Pacino and Jared Leto had amazing chemistry playing father and son. Both carried the best lines in the film. Leto’s character was a bit over the top but in a fun way that was much needed to carry the film to the finish line.

Overall, it’s an enjoyable film and worthy of a popcorn escape however, it could have been shortened by 30 minutes as at times it felt like there was unnecessary filler.

House of Gucci is in theatres beginning November 24, 2021.