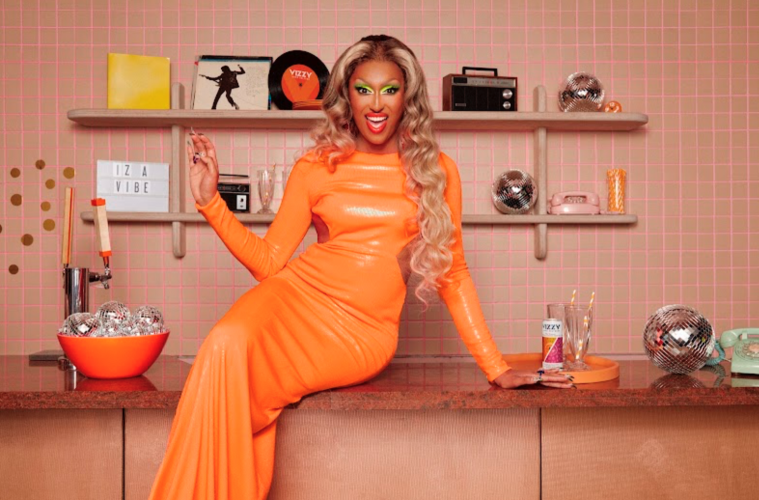 If she’s not a babe already, our favourite drag Queen Priyanka has been busy serving up all the good vibes here in Toronto today. She’s been spotted hustling all around the city boosting everyone’s day and attempting to set a Guinness World Record with the most personal compliments given on the first ever #GoodVibezDay!

Hey, after a tough two years, it’s clear the world is in a positivity deficit. Believe it or not, Canada even ranks as one of the most miserable countries in the world on the misery index, so we could definitely use more good vibez!

Priyanka is riding around all over Toronto with the Vizzy Gang between 9am and 6pm giving personal plus-ups to unsuspecting passerby, including stops in the Queen West and Church and Wellesley neighbourhoods.

But the positivity doesn’t just stop there, Vizzy Hard Seltzer and Queen Priyanka are inviting Canadians to get on board and dish out their own good vibez and compliments using #GoodVibezDay on social media. For every compliment using the hashtag, Vizzy will donate $1 up to $25,000 to LGBTQ2S+ charities Queer Collective and the 519, funding initiatives and spaces that support inclusivity for the LGBTQ2S+ community.

We had a chance to quickly chat with Queen Priyanka as she headed out to the busy streets of Toronto! We wanted to learn more about what boosts her confidence and how positive vibes are good for everyone!

What have been some compliments you’ve received that have boosted your confidence?

Priyanka: I’ve received so many compliments – perks of being a queen! I would also say that being asked to be Vizzy’s Community Impact Director last year was the ultimate compliment because it meant that all the hard work that I’ve put into my career was now being put back into the community. I loved it so much. I also love when people know the words to my music, it’s always so shocking to me.

The drag community has contributed to our city in so many positive ways. How did you start?

Priyanka: 2017 I hired a drag queen named Xtacy Love to perform at my birthday party and that is how I started drag! I can’t even believe that the very drag community that accepted me is now who I am. Drag makes everyone feel included and that’s so important.

We’ve been noticing a lot of fun Drag Brunches happening, where are some of your favourite places that you would recommend for us to check out?

Priyanka: Glad Day Bookshop with Erin Brockbich and Gladstone Hotel with Miss Moco are two of the best drag brunches in the city!

How has being hailed as “Queen” changed your life?

Priyanka: Well from hosting Kids TV to now being Queen of the World – it’s changed my life in so many different ways. I would say the ultimate win is being able to share the art that I want to share and having a big audience to share it with.

We love how you’re spreading confidence everywhere you go! Can you give us a few tips to boost our confidence on a daily basis?

Priyanka: I would say being your own cheerleader is the easiest way. We get lost in trying to find affirmations from different people and although getting a compliment from a stranger is so nice I think it’s important to compliment yourself!!!

Priyanka: My daily mantra is to have fun everyday or else why am I alive?!

Okay, since you’re giving everyone compliments…got one for me?

Priyanka: If I had to choose someone to take me out to a restaurant – it would be you! Just by looking at your Instagram I can tell your taste is impeccable and that you are a bundle of fun to be around!!

Make sure to tune into @vizzyhardseltzerca Instagram, where Queen Priyanka will be taking over the feed and documenting #GoodVibezDay.
If you’ve missed #GoodVibezDay, look out for Vizzy’s four new dual-flavoured hard seltzers: Blackberry Lemon, Papaya Passionfruit, Raspberry Tangerine and Watermelon Strawberry, which are now available at select local liquor stores across Canada in the new Vizzy Signature Pack or in select single cans and keep an eye out for the Final Chapter of Queen Priyanka’s Music Video series!

After being crowned the first-ever winner of Canada’s Drag Race in 2020, Queen Priyanka has become an international drag sensation and cultural icon. She is the host of What’s My Game? on WOWPresents Plus, and the co-host of a new podcast, Famous This Week alongside Canada’s Drag Race host and RuPaul’s Drag Race Season 11 finalist, Brooke Lynn Hytes.

As the drag persona of Mark Suknanan, Priyanka’s career started in television at MTV Canada, and she later joined YTV as the face of YTV’s The Next Star and then The Zone for the course of six years. In Spring 2018, top Toronto drag performer Xtacy Love took Mark under her wing and Priyanka was born! Priyanka quickly took the city by storm, snatching crowns in the Miss Crews & Tangos pageant and Woody’s: Queen of Halloween. She’s performed in every major city across Canada, Chicago & the Dominican Republic and even graced the cover of Now Toronto, being named the city’s “Number One Drag Entertainer.”

Priyanka is based in Toronto and Los Angeles. She was born in Whitby, Ontario of Indo-Guyanese descent and studied at Niagara College.