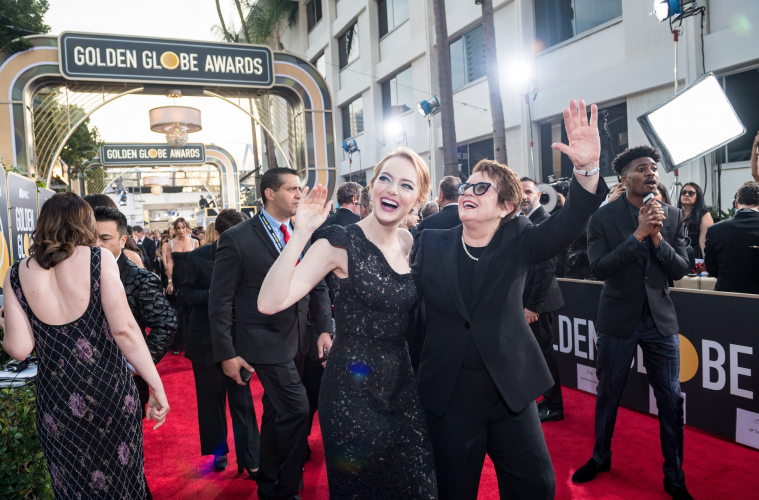 Our favourite quotes from the Golden Globes 75th Anniversary

Hollywood made it loud and clear at last night’s 75th Anniversary of the Golden Globes hosted by the Hollywood Foreign Press Association — Time’s Up. By now, most of us are aware of what transpired from the glitzy event that showcased “mani cams” and “shoe cams” as well as the predictable questions on the Red Carpet pre-shows. But last night’s tone, while trying to keep entertaining (because, after all that’s the business) was as much a celebration and recognition of hard working entertainers as it was a wake up call to all.

Just about everyone got the memo about choosing to wear black in solidarity for equal rights and not just in Hollywood but for all industries where women, in particular, have been tolerating discrimination, harassment, abuse in silence… until now. The often asked question, “who are you wearing?” took a back seat this year.

We kept our eyes and ears on so much during the awards ceremony last night starting with the Red Carpet coverage. A-listers gave their golden minutes on air to their “plus ones” that included advocates and activists for gender and racial justice. Instead of talking about the designer gowns and sparkling jewels, the attention was brought to the women who are educating and fighting everyday for justice. Included were Ai-jen Poo (Director of the National Domestic Workers Alliance), Mónica Ramírez, (Co-founder and President, Alianza Nacional de Campesinas/National Farmworker Women’s Alliance), Tarana Burke (civil rights activist and founder of the #MeToo movement in 2006 and Senior Director at Girls for Gender Equity), Marai Larasi (Executive Director of Imkaan, a British feminist organization which fights to end violence against Black and Minority Ethnic women and girls), Rosa Clemente (US community organizer, independent journalist and hip-hop activist dedicated to scholar activism), Calina Lawrence (advocate for Native Treaty Rights and enrolled member of the Suquamish Tribe), Billie Jean King (Founder of the Billie Jean King Leadership Initiative and co-founder of World Team Tennis), and Saru Jayarama (President of Restaurant Opportunities Centres United and ROC Action and Director of Food Labor Research Center at UC Berkely) who joined the red carpet with actresses Michelle Williams, Emma Watson, Susan Sarandon, Meryl Streep, Laura Dern, Shailene Woodley, Emma Stone and Amy Poehler.

“Too much of the recent press attention has been focused on perpetrators and does not adequately address the systematic nature of violence including the importance of race, ethnicity and economic status in sexual violence and other forms of violence against women. Our goal in attending the Golden Globes is to shift the focus back to survivors and on systemic, lasting solutions. Each of us will be highlighting legislative, community-level and interpersonal solutions that contribute to ending violence against women in all our communities. It is our hope that in doing so, we will also help to broaden conversations about the connection to power, privilege and other systemic inequalities,” said Ai-jen Poo in an official statement issued ahead of the Golden Globes. 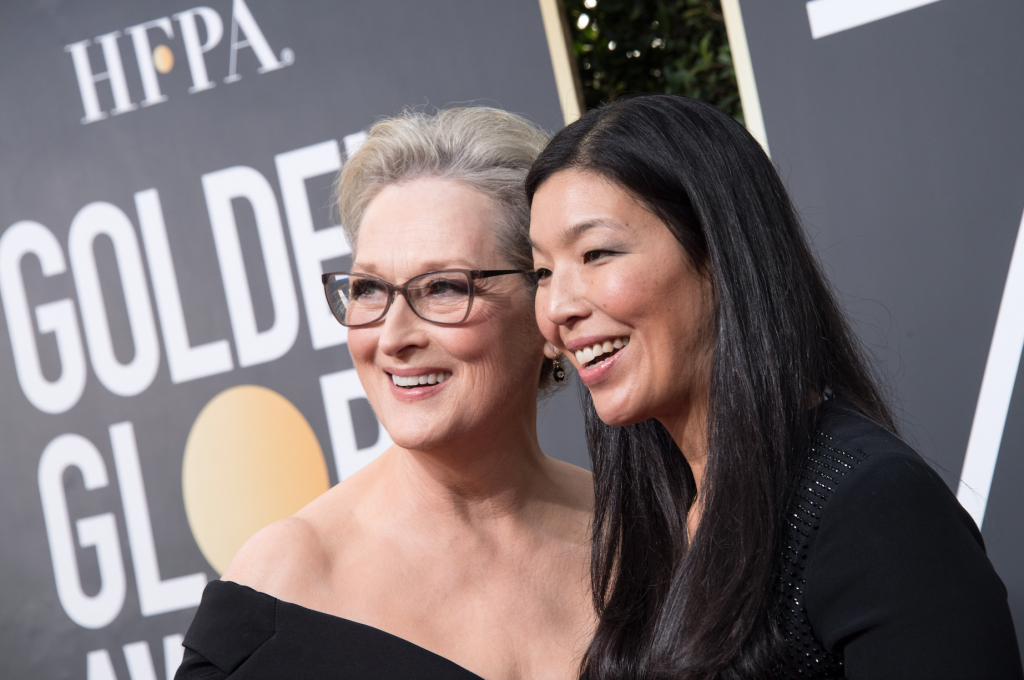 Meryl Streep, nominated for BEST PERFORMANCE BY AN ACTRESS IN A MOTION PICTURE – DRAMA for her role in “The Post,” and Ai-jen Poo arrive at the 75th Annual Golden Globe Awards at the Beverly Hilton in Beverly Hills, CA on Sunday, January 7, 2018. ©HFPA“

But don’t get us wrong, even though designers were not mentioned on the Red Carpet, we still went snooping on our own because, after all, we know the designers and stylists also worked tirelessly for the event — and shouldn’t go unnoticed especially since the call to wear all black went out within mere weeks and had everyone scrambling to get outfits. We’ve heard that Canadian design label Greta Constantine was the dress of choice for Amy Poehler.

So, now what? What can we do? The Time’s Up initiative was created by 300 female Hollywood actors, executives and others in the industry to raise awareness to the systemic sexual harassment in the entertainment business.  Time’s Up Now is an organization that provides subsidized legal support to women and men who have experienced sexual harassment, assault or abuse in the workplace . You can add your name to their Letter of Solidarity by donating to the Time’s Up Legal Defence Fund. Find out more by linking here. We’ll also get you a list of organizations to support here in Canada shortly. 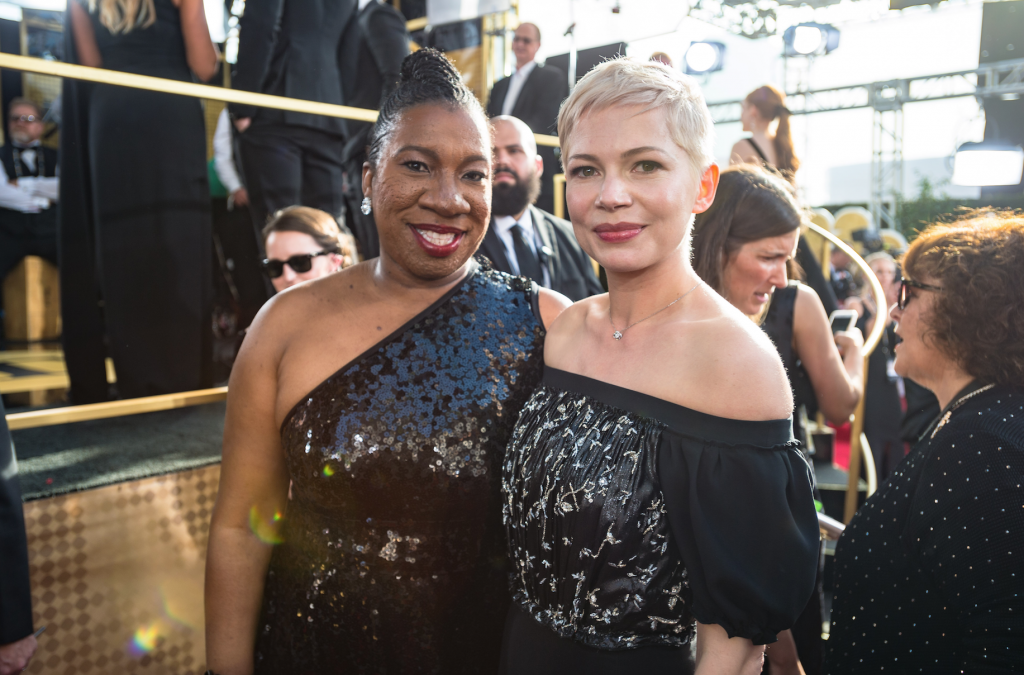 Nominated for BEST PERFORMANCE BY AN ACTRESS IN A MOTION PICTURE – DRAMA for her role in “All the Money in the World,” actress Michelle Williams poses with Tarana Burke at the 75th Annual Golden Globe Awards at the Beverly Hilton in Beverly Hills, CA on Sunday, January 7, 2018. ©HFPA

On the red carpet, Viola Davis offered amazing words to those who are suffering in silence,  “You’re born worthy, and I think that’s a message a lot of women need to hear. The women who are still in silence because off trauma, shame, due to the assault. They need to understand that it’s not their fault and they’re not dirty.”

When Elizabeth Moss (The Handmaid’s Tale) accepted her Golden Globe for ‘Best Actress in a Television Series Drama’, her speech quoted the Margaret Atwood dystopian novel that sent shivers through our bodies. “We were the people who were not in the papers. We lived in the blank white spaces at the edge of print. It gave us more freedom. We lived in the gaps between the stories.”

“Many of us were taught not to tattle. It was a culture of silencing and that was normalized. I urge all of us to not only support survivors and bystanders who are brave enough to tell their truth, but to promote restorative justice. May we also please protect them and employ them. May we teach our children that speaking out without the fear of retribution is our culture’s new North Star.” said Laura Dern (Big Little Lies) during her acceptance speech for ‘Best Performance by an Actress in a Supporting Role for a Limited Series’. 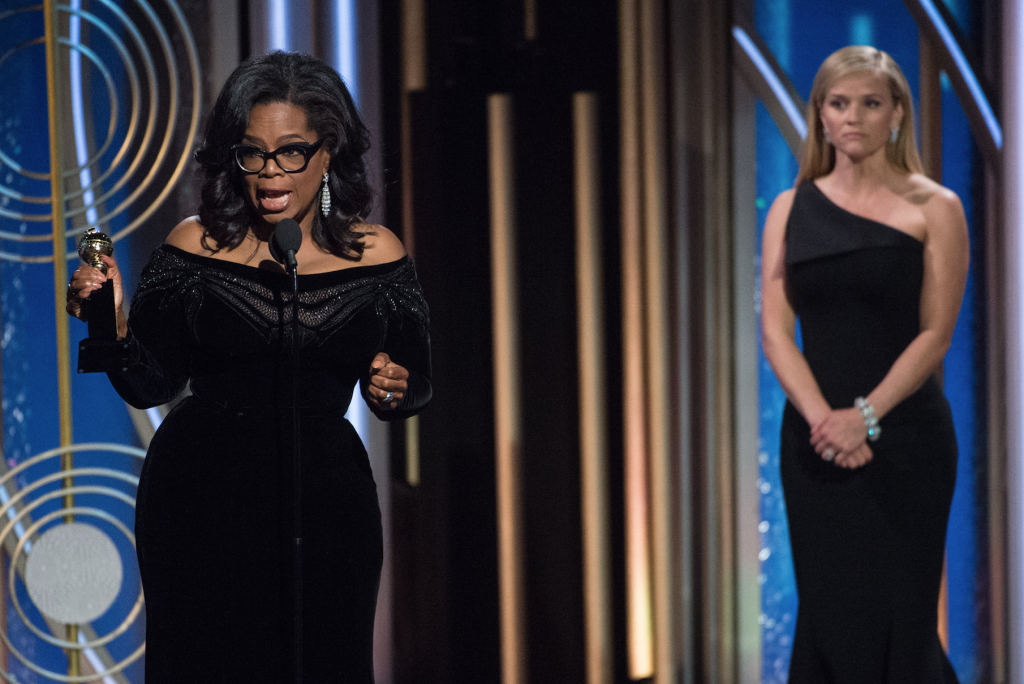 Oprah Winfrey accepts the Cecil B. DeMille Award for her “outstanding contribution to the entertainment field” at the 75th Annual Golden Globe Awards at the Beverly Hilton in Beverly Hills, CA on January 7, 2018. ©HFPA

Oprah Winfrey received the prestigious Cecil B. Demille award and had several unforgettable words that have stuck with us…“What I know for sure is that speaking your truth is the most powerful tool we all have. I’m especially proud and inspired by all the women who have felt strong enough, and empowered enough to speak up and share their personal stories. Each of us in this room are celebrated because of the stories that we tell. And this year we became the stories. But it’s not just the story affecting the entertainment industry. It’s one that transcends and culture, geography, race, religion, politics or workplace.”

“I want all the girls watching here and now to know that a new day is on the horizon! And when that new day finally dawns, it will be because of a lot of magnificent women, many of whom are right here in this room tonight, and some pretty phenomenal men fighting hard to make sure that they become the leaders who take us to the time when nobody ever has to say ‘Me Too’ again.” said Oprah Winfrey.

Was there a quote or moment that stood out to you? Let us know!