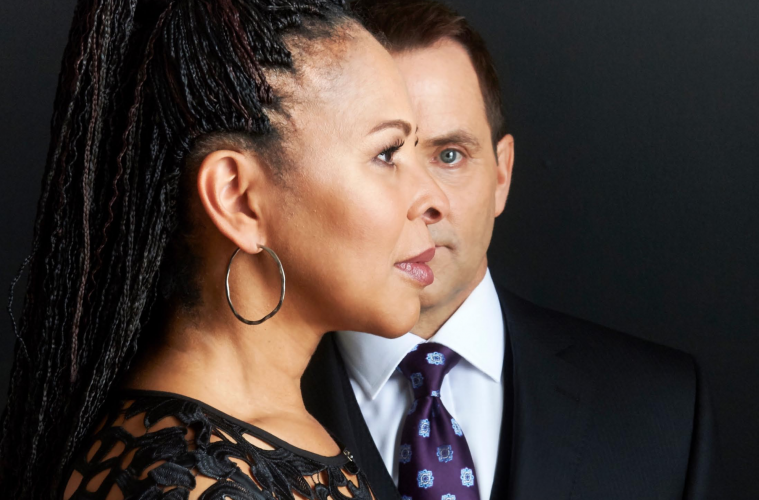 The Evasons are one of very few married couples in history who have mastered the staggeringly difficult art of two person telepathy. During the early 19th century, a small number of married couples gained significant notoriety with performances of Second Sight. The Evasons continue to travel the globe, sharing the rare and mysterious legacy. From the moment they walk on stage, they interacted and engaged with everyone in the audience. Tessa perceived birth dates, personal items, a serial number on any bill in a borrowed wallet or even the name of distant loved ones — all while standing on stage wearing a blindfold.

Since then, The Evasons have traveled to over 40 countries, performing at private parties and gala events. They’ve appeared on network television in North America and around the world. And they have received some of the top awards in the field of magic and mentalism. So, how did they catch the attention of filmmaker Guillermo del Toro?

Tessa was 13 years old living on the beautiful island of St. Lucia in the Caribbean when she first took note of this fascinating world of mind reading. She tells us, “once a month, usually on a Sunday evening, the local TV station would broadcast shows from North America. Sometimes she also had access to VHS tapes that people brought back with them from trips abroad.”

That was the first time I saw a magician and his assistant perform magic,” said Tessa. “I was in awe of their performance as were all my family and friends who had gathered together with me. For some reason, while I was watching it, I thought I figured out how it was done.”

But like most kids, she never really thought much about a career in this mystical world until 1983. This was the year she met her partner and husband, Jeff. “He was a professional magician in Toronto and we started performing magic together.” Tessa had done some modelling and was comfortable on stage, but had never done anything like magic. She recalled seeing one of her first magic tricks that left a lasting impression.

“One time we were watching some magic videos together and I recognized one of the magicians and his assistant. They were the same couple I had seen when I was a young girl and they were performing the same illusion! I told Jeff how I thought it was done and he told me I was correct. I also learned that they were a famous magic couple who performed on regularly on TV. Their names were Mark & Nani Wilson.”

In the early 80s, a friend had an audio tape of a couple performing a two-person mind reading act at the Magic Castle in Hollywood. Tessa  mentioned, “they were called ‘The Tuckers’ and they were incredible!” By the time she and her partner met them, they had retired from performing but little did they know, The Tuckers were waiting for the right couple to come along to pass along all their inner secrets. You can say they were at the right place at the right time.

The Tuckers instantly knew that Tessa and Jeff were the ones to impart their years of wonder and experience. They became mentors to the Evasons spending years studying and rehearsing together honing their craft. Eventually, they modernized the act to make it their own. “There were no other acts like us at the time, and the booking agents loved us,” said Tessa. “We became super busy, performing at events all over the Toronto area. In no time, agents had us booked around the world.” 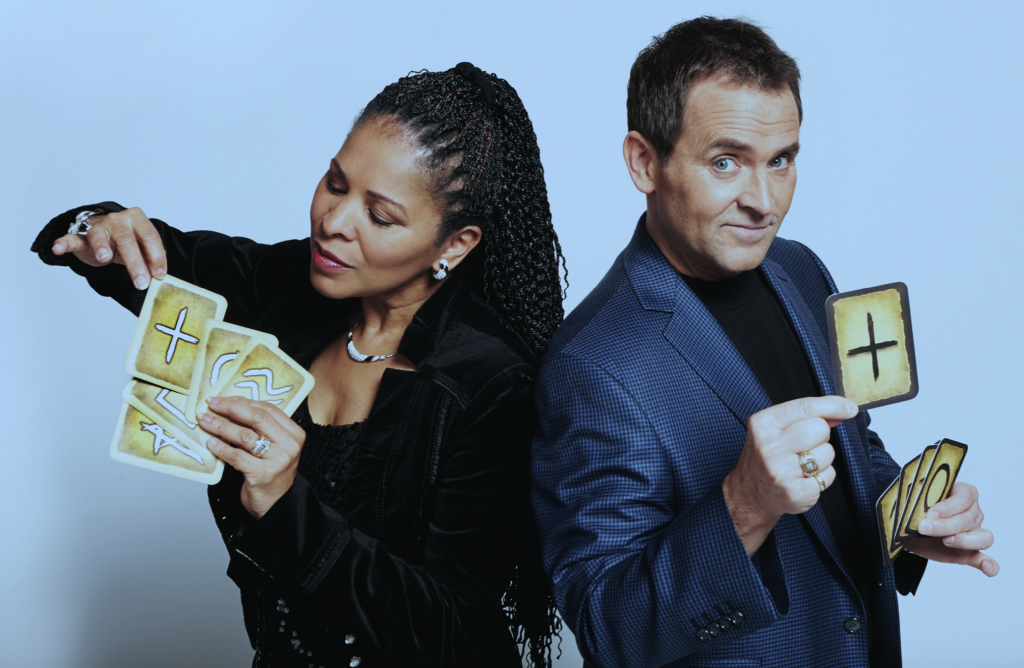 From then on Tessa and Jeff have become highly sought after entertainers in the mind reading industry. Then in 2019, they were at their cottage here in Canada where they received a call from film producer, Miles Dale.

He told Tessa and Jeff that Guillermo del Toro was on the other line and he would like to chat with them about his upcoming film, Nightmare Alley. “We looked at each other, wondered if it was a prank call, but it really was Guillermo on the line, OMG!” said Tessa.

“He was just so friendly and warm, and incredibly nice. He told us we had some mutual friends, Teller (from the Penn & Teller) and Derren Brown (world famous mentalist from England), and that when he asked them if there was two-person mentalism team that he should speak with, they both recommended us as the experts on the subject.” 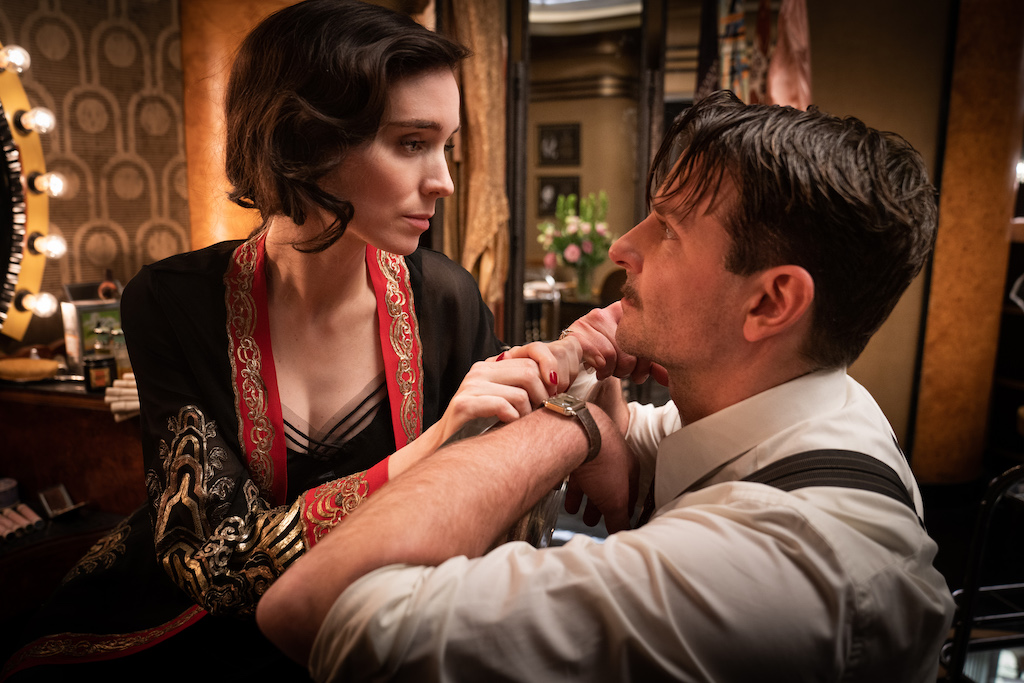 In Nightmare Alley, a reimagined and updated version from the original story and film, lead character Stan (Bradley Cooper) gets his hand on a book revealing the secrets of mind reading acts as documented couple Zeena & Pete. So, does this sort of “bible” really exist?

Tessa explains, “These books are really just notebooks filled with secrets that have been gathered over time. These “books of secrets” are unique to each mentalist couple. In Nightmare Alley, Zeena & Pete had a secret book that they created. It was Pete’s prize possession. The secrets in the book were shared with Stan so that he could do the act with Zeena, and later on, with Molly.”

Working with Guillermo del Toro in anyway shape or form would be a dream. He’s brilliant in so many ways. I was curious as to how Tessa and Jeff contributed to the the characters and what was asked of them.

“Although we cannot reveal a lot of details, we did advise Guillermo on which mentalism effects were not plausible and might therefore reduce authenticity and believability,” mentioned Tessa. “Authenticity was very important to Mr. del Toro, and to us too. He listened closely, with interest.

Guillermo was quite receptive to our recommendations. He wanted to protect the secrets as much as possible while allowing the viewer to feel they were behind the scenes of the lives of the magical performers.

We had to wait to see the film to learn exactly what they used from our notes on the script. One thing we recommended was that they expand on the timeline and make it clear so people could see how challenging it was and how long it took for Stan to learn the act prior to performing it with Zeena. It was also interesting to see that Stan’s blindfold had an image of an eye similar to our logo.”

It’s understood that these secrets are held close to the heart within the mind reading community. How did The Evasons work around this? We’re oaths taken to not break the code, or something?

“Kind of ;), ” said Tessa, “The secrets exposed are a compilation of older methods adapted for the movie. Although some of the things in the movie would probably still be effective today, that’s not quite the way contemporary mentalists work. It’s wonderful to peek back into the past and see how things were done in that era. While much of the mentalism performed today is based on ideas that go way back in time, there have been so many advances in techniques and methods.

The mentalism being done today is truly incredible and often very different from mentalism of the past. But what hasn’t changed is the way mentalists use keen observation, psychology and intuition. Like when Zeena read Tarot cards, or when Stan tapped into his natural insight and perception to read people. True master mentalists have tools in their toolbox that cannot be exposed.”

Whoa! Interesting! Okay, you’ll have to see the film (I’m a huge Guillermo del Toro fan so I can tell you that I enjoyed it very much). 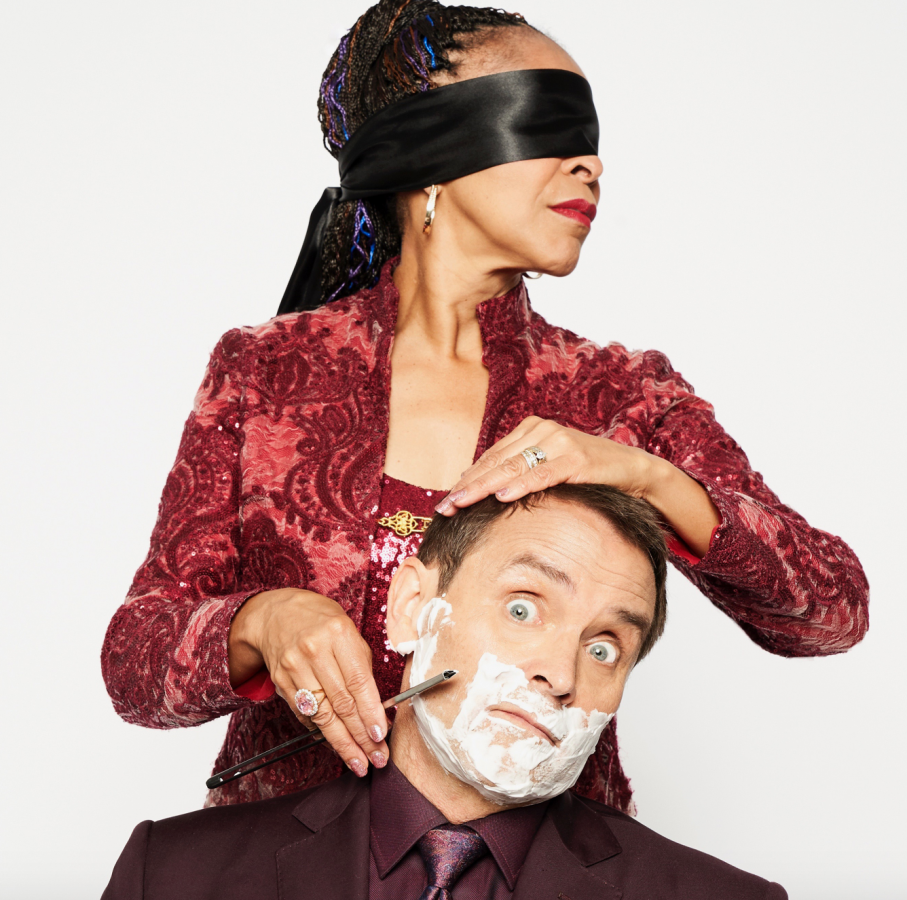 But back to Tessa…

What’s it like to be a woman in the industry?

“Traditionally, most female mentalists have been a part of a second sight act,” explains Tessa. “There haven’t been many solo female mentalists. And if they are a solo act, they tend to be primarily a magician or a hypnotist, not exclusively a mentalist. While the number of female magicians has increased significantly around the world, there are far fewer mentalists like myself, who only perform mentalism.”

I was curious to learn what has been the most difficult trick she’s ever performed to an audience?

“Well, the first time going out on stage to perform mentalism was definitely the most difficult!” said Tessa. “I had never spoken on stage before, so it was quite a challenge to go out there in front of an audience and wear a blindfold while speaking into a microphone. That was a long time ago, and I’d say currently the most challenging thing for me on stage is something I do right after my blindfold is removed.

Jeff hands me an object that was given to him from an audience member earlier in the show. By simply holding it, and feeling it, I walk through the audience, trying to discern who it belongs to. Eventually I return it to the person who owns it. But it doesn’t end there. I use my intuition, some might call it a sixth sense, to share thoughts and predictions about them that I had no way of knowing. There is no trick to it, I take chances and I just go with my gut feelings.”

We also wanted to know what is always a crowd favourite?

“Second Sight is definitely the crowd favourite!” said Tessa. “It’s dramatic and mysterious, and filled with amazing surprises! As soon as I put my blindfold on, you can feel the energy shift in the room. It peaks the audience’s interest. With the elimination of the sense of sight, I read minds and reveal personal facts and details about random people. It’s captivating for the person who I’m reading, and fascinating for those who know them.

The audience who may not know the person I’m reading, they’re engaged by watching the interactions and reactions. People love picking up on idiosyncrasies and trying to guess at another person’s story. Based on the popularity of reality TV shows, we know that people love to be entertained by other people’s lives. In our show, we keep it fun and positive so everyone feels good about it.”

Another favourite Tessa tells us, is revealing the phone number that a volunteer imagines they are dialing, and then revealing the name of the person they are calling in their imagination! “There are a few parts to this piece and it just builds into a stunning ending for the volunteer. Their shocked response reverberates through the audience. It’s a thrill to perform it!”

What advice would she give young women today who are interested in this type of career?

Tessa tells us the best way to learn in person is to find a mentor. Another way is from books and videos in libraries and online. “Also, go see as many mentalists as you can, wherever you can find them. Currently, a lot of us are performing virtual shows online and we have Youtube channels with samples of our work. For anyone near Los Angeles, check out the world famous Magic Castle in Hollywood. They have fabulous courses and they are very supportive of female entertainers. You could also join a local magic club. Of course, they can always reach out to us through our website or social media. Our Youtube channel is: https://www.youtube.com/TheEvasons ”

Want to keep up with The Evasons are doing? You can find them currently performing their shows virtually and mainly for corporate and private events. They will be performing live shows for the public soon. They will also be at Dickens Parlour Theatre in Delaware in March and August, and in April we will be at Liberty Magic in Pittsburgh. Keep an eye out for more details on their public show page on our website: www.evason.com