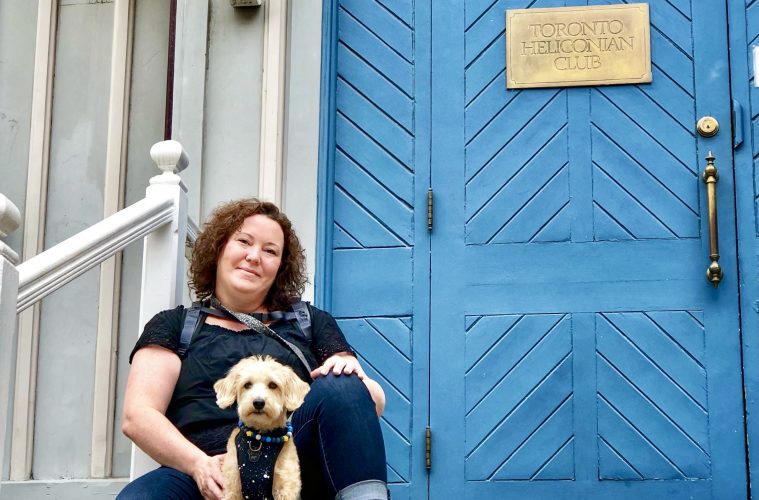 Meet Tracy and her theatre pup Max I. Million

In-person theatre performances are returning in our province after a roller coaster ride over the past two years. Theatre was one of the hardest hit industries that employs thousands in our country and left many stranded. My heart sank as our city’s theatre scene was buzzing. The smash hit Broadway musical Hamilton had just opened but then all of Toronto shuttered within days. The amount of money invested in the stellar cast and crew, the costumes, the set design, the marketing all disintegrated right before our eyes. Heartbreaking. But it wasn’t just the large-scale productions that were affected. Our city has numerous independent theatre companies as well as theatre destinations like Stratford and Niagara-on-the-Lake that were also hit hard.

We had originally planned to run this heartwarming story about the incredible duo of Tracy Lynne Cann (Theatre Stage Manager) and her pup Max I. Million (Theatre touring dog, dogfluencer, and model) when we thought we were done with the second wave of the pandemic. But our city was hit with yet another wave and another closure.

Now that it’s Spring of 2022 and live performances are returning to the stage,  we are easing back cautiously but filled with optimism.The timing now seems right to share this behind-the-scenes perspective of theatre life.

What caught my attention was the beautiful team she had built with her six year old Westiepoo, Max. When he’s not physically on stage in one of his acting gigs,  he can often be found behind the curtains right next to Tracy. An exceptionally good boy! 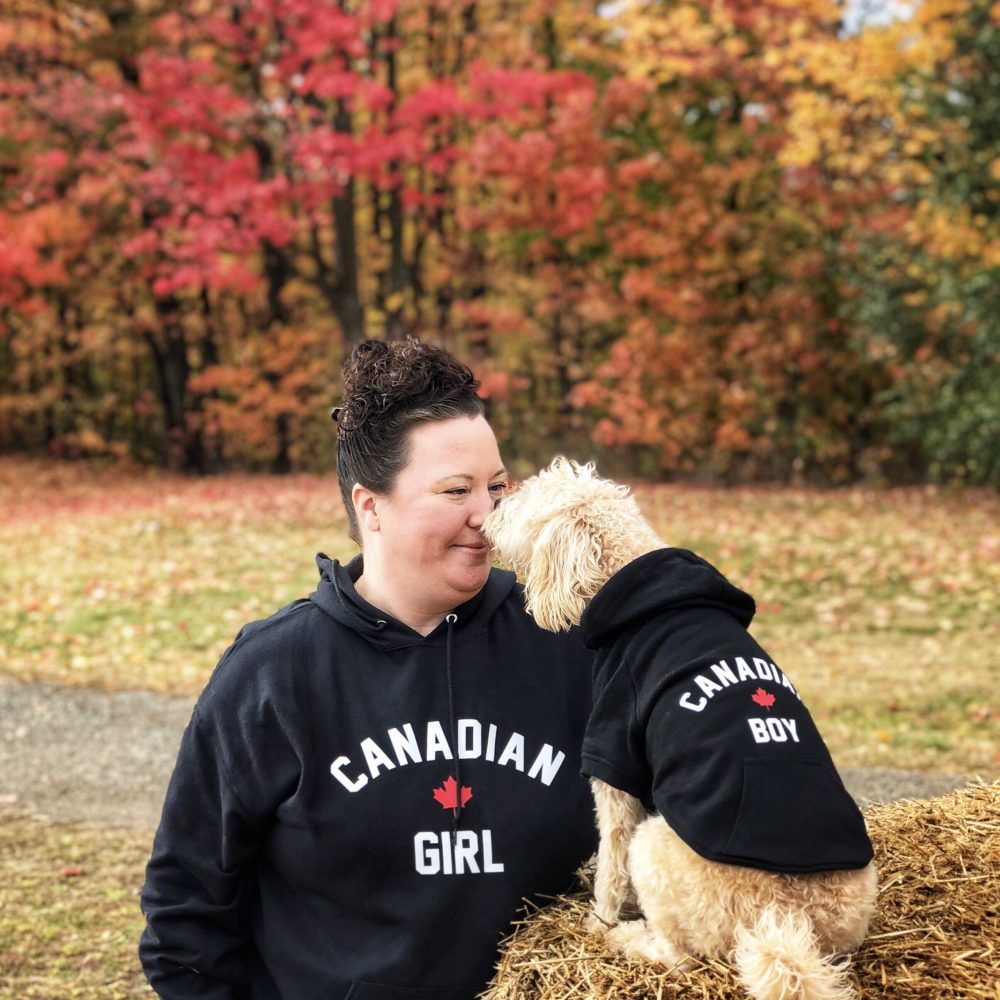 Max’s theatre career has taken him across the country from Vancouver, BC to St. John’s, NL. He has toured extensively throughout each of the ten provinces with Menopause The Musical, and has worked several contracts in theatre, musical theatre, and opera in numerous cities throughout the country. In the past couple of years of pandemic closures, Tracy and Max have managed to keep up with his training and are happy to be welcomed back in Toronto and working.

Tracy mentioned Loose Tea Music Theatre, a company dedicated to the exploration of cross-cultural and social relationships, has been probably the most nurturing and compassionate companies she’s ever worked for. “With a comfort agreement that encourages company members to take breaks, drink water, stretch, and work within their own boundaries; Loose Tea Music Theatre does an incredible job boosting company morale and fostering creative development. And I’m so happy that Max is able to be a part of that. They really value his presence, even if it’s clear the pandemic has made both Max and I a lot softer,” said Tracy.

Max’s career in the entertainment industry began quite organically and behind the scenes. Tracy worked in the performing arts as a Stage Manager since 2003. In 2015, after a few years dealing with her anxiety, panic attacks, and agoraphobia following the death of her father in 2012, she took some time off to get help. Tracy tells us she was heavily medicated, attending regular psychotherapy sessions, and feeling hopeless and helpless. “I was fairly certain I would never work in the industry again (an industry which often requires 6 day work weeks, long hours, and frequent travel – especially as a touring Stage Manager), so in March 2016 I made a decision to stay home and get a dog to help me on an emotional level, knowing I would more than likely need to transition into a new job with more regular hours,” said Tracy.

Tracy and Max had a bond from the very beginning, but when he began sitting on her chest during panic attacks, she knew how incredibly special that bond actually was. “On the advice of my therapist, I began bringing him up on my chest with the first symptoms of a panic attack, and it was only a few months before Max was able to recognize the symptoms of a pending panic attack before I did. I gradually began decreasing my medication and began to rely on Max’s cues. Not only did I have a dog who was offering emotional support, getting me out of the house, and giving me focus; but I had a dog who actively functioned to circumvent panic attacks by warning me of rapid heart rate acceleration by placing his two paws on my thigh and applying pressure, and asking up onto my chest and applying deep pressure therapy while slowing down his heart rate and breathing so that I would follow.”

Max gave Tracy the confidence to get back to working in the performing arts, with him right by her side. Her first contract back to work was at Buddies In Bad Times Theatre, a venue that fostered a dog friendly environment.  “Even though he was still a puppy and still in the training phase, I was encouraged to bring Max to work with me with the full support of their office staff who helped me out immensely,” said Tracy. “I then took another contract in Toronto soon following and, after careful research, I began training Max as a Psychiatric Service Dog. And In the Fall of 2016 I made the big decision, with the full support of the company I was working with, to continue our training on the road with a cross-Canada tour of Menopause The Musical. In fact, the Canadian producing company for Menopause The Musical just happens to be called ShaggyPup Productions, so Max naturally became what we refer to as the “ShaggyPup Maxscot”.”

If you’ve ever seen Tracy and Max together, you know it’s truly a special bond. It’s a mutually trusting relationship between this human and dog. I loved hearing about their heart-warming journey and what training has been involved for both on and off the stage… 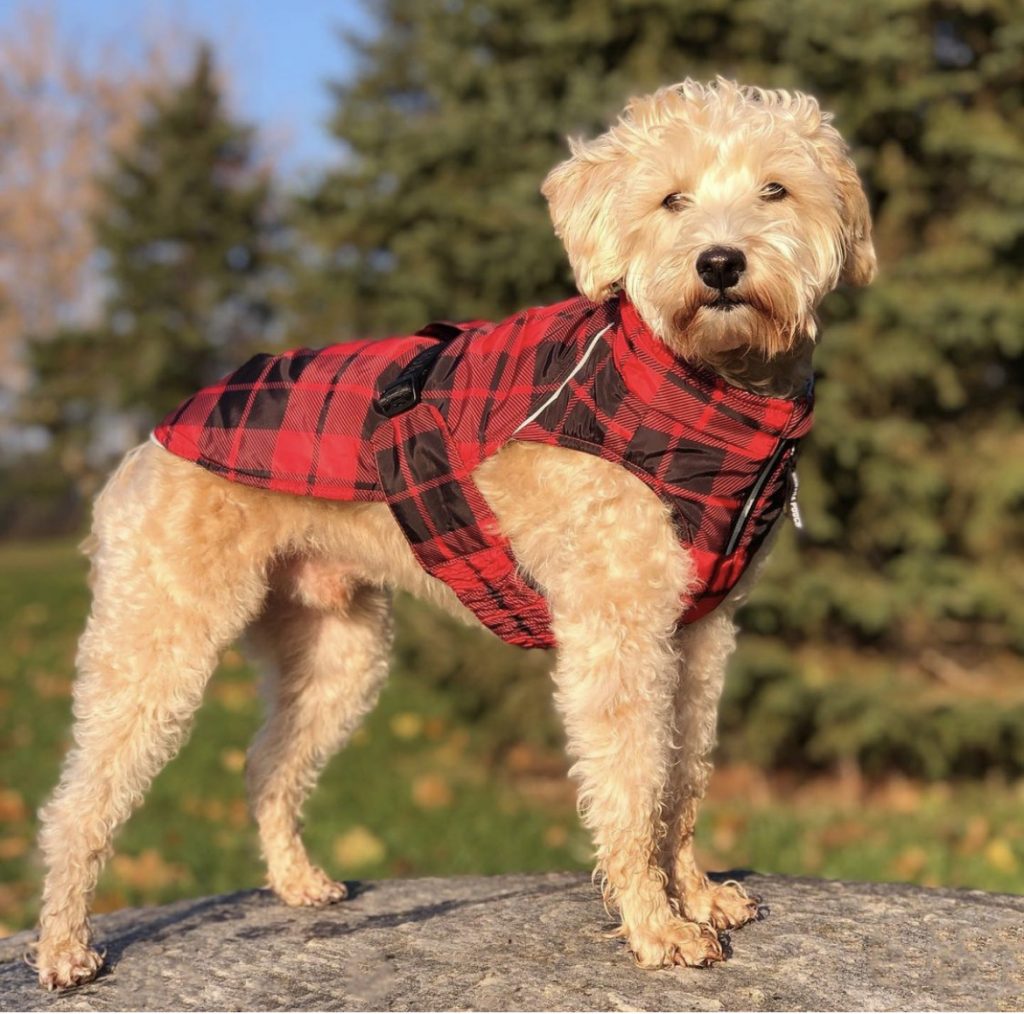 What kind of training have you and Max worked on for both on and off the stage?

Tracy: Max and I work verbal commands and hand signals often. His training, combined with his ability to read emotion and instinct to want to help, is what makes us a great team. Max was especially helpful during the beginning of the pandemic, when I lived in a constant state of panic and anxiety. What wasn’t helpful was the isolation and lack of socialization we experienced during the pandemic. Max was attacked in 2019 and I was in the process of helping him regain lost trust when the pandemic hit. Now that the restrictions are lifting, we are working together to help ease his own anxieties toward new dogs and people. It’s a new level of training that I couldn’t anticipate.

How do you prepare Max for work?

Tracy: I honestly don’t do much to prepare Max before a show. While touring, we can often see a new venue daily, so Max usually gets some time to explore the space and meet the venue’s technicians during set up and sound check. About 15 minutes prior to the performance, he then puts on his service vest (or his Menopause The Musical black hoodie with the production’s logo) and he knows it’s show time.

We play anywhere from small intimate venues where Max is usually hidden away with me in a booth during the performance, to large casinos where we walk out into a crowd of 2000+ patrons and take our position at the production table in the middle of the house.

Max was a well-mannered dog from the beginning. Combine that with some training and a whole lot of luck in that we were able to start Max’s journey in the entertainment industry with incredibly supportive companies and venues that understood and appreciated his unique form of work, he was truly bred for success. 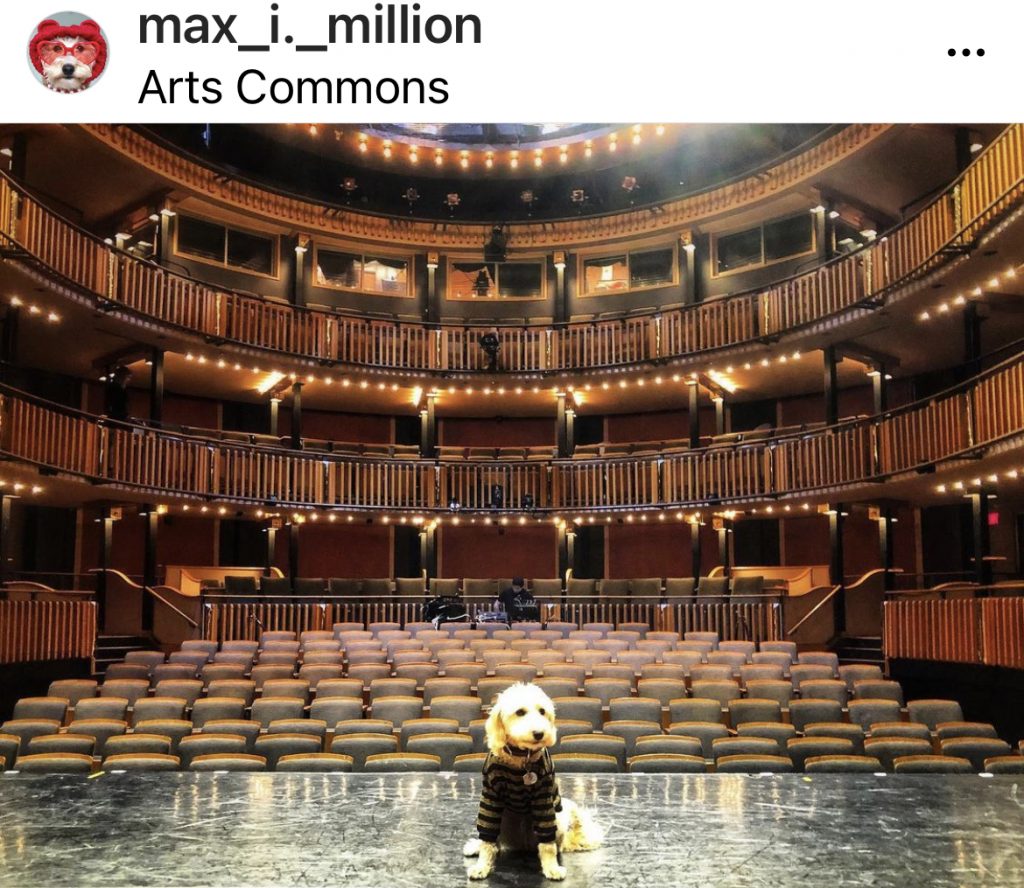 What tips would you have for people who think they might want to train their dogs to become office (or work) dogs?

Tracy: If I have any tips for those who want to turn their pet into a working dog, it’s to have patience with yourself and your dog, have consistency in your training, and develop a support system. A solid support system makes all the difference whether it’s a training group, a group of like-minded dog owners, or a group family, friends, and/or co-workers. I get a lot of comments along the lines of, “It must be so nice to be able to take your dog to work with you.” And my answer is: “Yes, it is. But it’s also a lot of work.” Our support system helps makes it much more manageable.

Max plays a significant role within a theatre company. Companies like Loose Tea Music Theatre and ShaggyPup Productions like having Max around not just because he’s cute and lovable, but because they’re aware of the benefits of having a dog in the company. Studies have proven a pet in the workplace can offer calming effects, helping to lower stress, reduce blood pressure, and nurture creativity. Max is a great tool as he’s a dog who reads emotion so sometimes takes it upon himself to check in with other company members experiencing anxiety. He is valued and appreciated. The healthy work-life balance that pets create in the workplace is becoming more well known. There’s currently an upward trend of allowing pets in the workplace, and I couldn’t be more thrilled about it.

What are some of the most common questions you get on the road?

Tracy: Following some performances of Menopause The Musical, there is a Question & Answer period that Max often partakes in. He joins the cast onstage about half way through and is introduced as one of the company members. The audience is always delighted by his presence and afterward, while photos are being done onstage, Max has a chance to interact with the patrons when not required for photos. I often get questions such as:

Q: What breed is Max?
A: Max is a Westiepoo. A cross between a West Highland Terrier and a Miniature Poodle.

Q: How did he get started working with you in theatre?
A: Well, it’s a long story. (cue abbreviated version of the long story…)

What’s coming up for them? Max will be back touring with ShaggyPup Productions’ Menopause The Musical this  Spring. Follow him on Instagram for updates. He’ll also be joining Tracy for rehearsals and performances of We Are Here, a partnership between Workman Arts and RARE Theatre, being presented at the Centre for Addiction and Mental Health’s (CAMH) new auditorium in June.  We Are Here is a a collective piece created by the ensemble using personal and historical stories to examine the history of CAMH; from the mistreatment of patients when it was the Provincial Lunatic Asylum to present-day stories of mental health care at CAMH. The piece created by director and playwright, Judith Thompson in collaboration with eight artists with lived mental health experience, chosen from Workman Arts member artists and from artists who have received services from CAMH.