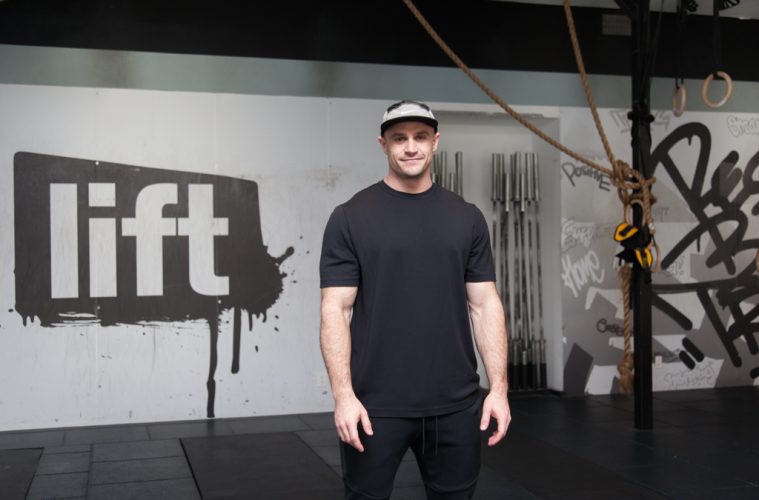 Move Coalition is a new initiative from top-notch trainer Josh Adamson and his partner (in life and business) Jess Webb. The idea is simple- follow, join and move along, there’s no hidden agenda (really), the mission is to improve the lives of anyone they can reach, unlocking the powerful mind-body-spirit connection.

While I had a weekly sweat session with Josh at their King Street East sweat emporium Lift Corktown, I was completely sidetracked after speaking with him about his career, it’s so easy to judge people- and Josh turned out to be so much more than just a big guy with good guns. Sitting with Josh and hearing the very important truths, the whys behind his move to Canada and how he found his footing here damn near brought me to tears.

Josh wasn’t always a ‘bro. Not even close. Growing up in Australia, Josh was actually kind of awkward, chubby and a bit of a band geek. Puberty has a way of amplifying the awkwardness and by 13 Josh was shut out of dating, rejected at an early age because of his appearance, “I realized that one of my crushes starting dating my friend, who was a swimmer, and had a 6 pack, and it donned on me. I started to clue into physical appearance. I started into fitness because I wanted a girlfriend, and started working out and went from there.”

And went from there he did. Quickly Josh had caught the fitness bug and began his journey from chunky teen to one of Toronto’s top trainers. In his first year as a trainer, he helped a client lose over 100lbs. To say he changed their life would be an understatement. But while he was instilling good habits in his clients’, his own proclivities were a problem. Hard partying and fun times weren’t lifting his spirits. One of his fellow trainers invited him to tag along to Byron Bay, to surf with the sunrise, and dismantle some of the tendencies that were starting to bog him down. It was a quick transformation, one that changed his life. “It was incredible. It was a natural high, I need more of this in my life, and I was ready for that change. I wanted to keep evolving to become the best version of myself. Struggle equals progress, so I kept making things harder; dieting is hard, but something positive comes out of it. Training six days a week for two hours a week is hard, but something positive comes out of it. I’ve been sober for seven years, the amount of positive things that has come out of that is insane.”

After his trainer pal picked up and moved to Canada, Josh was keen to join, and set out to Australia Jr, or Whistler as anyone who’s been can attest. Whistler didn’t stick, and instead Josh moved to Toronto. He had barely enough money to get the plane ticket and once in the city was left with some pretty miserable options. Staying at a hostel and working from 5am to 10pm daily, Josh became a hustler, training clients at Goodlife and just barely getting by. That life is familiar to anyone new to Toronto. We get a bad rep for being cold, and that’s not just relegated to winter months.

“I was living off rice and salsa. I didn’t eat anything for four weeks other than that. I can’t tell you how low it was. I went from six figures in Australia to living on rice and salsa. I had no friends for three months. Everyone is so closed off here in Toronto. I just worked my ass off for 12 years. From nothing, no job, no friends, no family, and now this. I’m part-owner of Lift and Move Coalition. My best friend hung himself in Australia, this is so hard to talk about, it was four years ago, just before Lift opened. I didn’t deal with it, I was trying to open the gym and put it on the back burner. Last year it caught up to me and I got really depressed. I need to do something to honour his life, so I built a program that I wish I could give to him- he was schizophrenic, depressed, drank four bottles of wine a day, just crazy. He hung himself in his parents backyard and his dad had to cut him down. He did so much for me and I’m so comfortable with the LGBTQ+ community because of him. We have the biggest LGBTQ+ cross fit community in Toronto and I credit that to him.“

It’s that sort of down-to-earth empathy that makes the connection real for Josh and his legions of loyal clients. But Josh’s mission, with Jess is to empower more people that he can possibly train in person. Move Coalition is the tool to connect, with new workouts coming out every Tuesday, Thursday and Saturday, a routine that will improve your mood, connect you with the fitness community and provide a much needed endorphin boost to improve your mood and bring a stable routine to this COVID-closure status quo. The workouts require no equipment whatsoever, a careful consideration aimed at allowing everyone to participate.

So, what are you waiting for?

Interview may be edited for length or clarity.