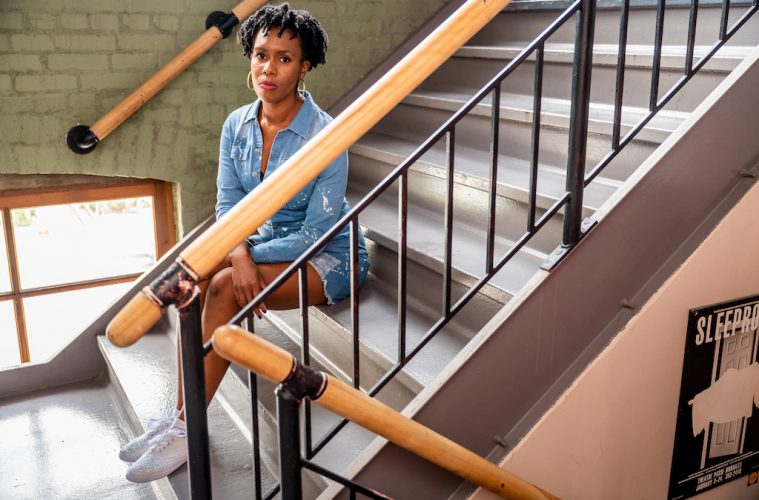 Kanika Ambrose tells the story of OUR PLACE

Kanika Ambrose is about to take us along for a ride in her new play, OUR PLACE— a drama that takes us to Jerk Pork Castle in Scarborough where newcomers Andrea and Niesha work  in exchange for cash under the table. As the two scrape out a life in Canada, they must also navigate their status as undocumented workers.

if you don’t know about it, you better be about it and ask about it!

OUR PLACE is a funny and keenly observant script that unveils the lives of the two undocumented Caribbean workers who go to desperate lengths to get Canadian citizenship — a moving, timely story of those rendered invisible in a ‘welcoming’ Canada.

Playwright Kanika Ambrose is Toronto-based multidisciplinary artist and gifted storyteller who grew up in Scarborough. For OUR PLACE,  she draws from personal connection and perspective on the invisibility of the injustices that undocumented members of the community face.

Sabryn Rock, who was previously tapped, will return to direct the production, with an ensemble featuring Virgilia Griffith (Dora Award winner for Harlem Duet, The Expanse, Iphigenia and the Furies (On Taurian Land), Guarded Girls, Betrayal, Ma Rainey’s Black Bottom); Sophia Walker (Y: The Last Man, The Handmaid’s Tale, Shadow Hunters); Pablo Ogunlesi (So Speaks The Land, Black President, This Is How We Live); and Tremaine Nelson (Titans, The Expanse).

Tell us about your Scarborough?

Ambrose: Scarborough is a mecca of diversity of culture, people, food. It’s strip malls, basketball courts, RT transit that goes to the mall we lovingly call “town.” It’s full of complex socio-economic boundaries that seem to divide it into many tiny sections that, when you cross, seem like whole other worlds. Honestly, there are parts of Scarborough that are minutes away from where I grew up that I never crossed until I was an adult.

Many newcomers to our city have found Scarborough as an area where they can work and live. What do you think is the draw?

Ambrose: Besides affordability (and affordability is a huge part of it), when you come to a new country, you tend to search for any connections you can to home. Often, people immigrate knowing where friends and family are located and even live with them temporarily. Then, as they find their footing they choose to live in the area that has become familiar; where they feel connected. That’s in the best case scenario. In other cases, Scarborough is often a place where the government temporarily house refugees and others in need of transitional housing, due to the abundance of motels along one particular strip. So, again, when these people find their footing, they tend to stay.

Is it as welcoming as it seems to be?

Ambrose: I think so, I mean, as with anywhere, you have to open yourself up to new people and experiences. In my experience, Scarborough is filled with good people who know the struggle and are willing to help. Shop owners are friendly and appreciative of new and existing business and are great people to start forming relationships with. There’s also a wealth of community centres and programming meant specifically to welcome newcomers and youth. The bus system can be frustrating but, for the most part, they run frequently.

What was the inspiration for this latest work OUR PLACE ?

Ambrose: In 2016, my husband and I were starting the filing process for his mother to come and live with us in Canada. Through this process, I became well acquainted with all of the red tape surrounding the Canadian immigration system. Also around that time, someone I knew who was working at a Caribbean restaurant, unfortunately, was deported. When leaving, she said that she was happy that she was caught and not one of her co-workers who would gain legal status through marriage the next day. I started to think about the complexities of marrying for citizenship and the complications of power one spouse would have over the other when they are depending on them for something so critical. Also, it was in that same year that Canada welcomed Syrians fleeing the war. So at the time, immigration was top of mind for me and a lot of people I knew; it was with this in the air that I started to write.

What do you wish people to understand heading in to see OUR PLACE?

Ambrose: The dialects and countries in the play are fictionalized in order to protect the identities of people who may be in precarious work and immigration situations. I did not want to link any one country of having people more likely to immigrate illegally. For me, it also accentuates at the characters in the story are representative of a larger issue.

What do you hope they will understand after seeing this play?

Ambrose: That what happens to the women in the play is not unique. These are the sacrifices that women– that Caribbean women make for the sake of their children all the time. Yet, the beauty of these women is that they are able to find humor and joy in even the most difficult situations; that’s why I love writing about Caribbean people so much.

All of the characters I wrote are just trying to survive in precarious circumstances. Whatever they do to get what they want, I hope it will be viewed with that in mind.

Scarborough seems to be having a shining moment in books (Brother), film (Scarborough, Brother), and arts (Nuit Blanche) amongst others. How is the community reacting to all this incredible attention?

Ambrose: I can’t speak for everyone; it’s a huge community! From what I’ve seen, there is, of course, a sense of pride when someone from Scarborough is interviewed on TV or on a newspaper front or a billboard. People recognize that and it opens up the realm of possibility; especially when that person is not white.

Ambrose: Other than come to the show? Come to the show; the actors and director have done brilliant work. It’s hilarious and also heart-breaking. I especially hope that folks will come to black out night (specifically for people who identify as black). I really feel like those nights are so special; there’s a real sense of community.

Kanika Ambrose is a Toronto-based playwright,  librettist and screenwriter. She has been playwright-in-residence at Cahoots Theatre and Obsidian Theatre Company. As a playwright, her work has been presented at Toronto Fringe, Crow’s Theatre’s East End Performance CRAWL, Rhubarb Festival, Black Lives, Black Words, Rising Tides Showcase and SummerWorks Festival.

As a librettist, her work has been presented in Tapestry Opera’s “Tapestry Briefs,” Sparks and Wiry Cries’ “SongSLAM”, and Curtis Institute of Music (Philadelphia) where her piece, “Anansi and the Great Light,” created with composer Nick diBerardino and the students at Girard College premiered. Her opera “Of the Sea” with composer Ian Cusson premieres at the Bluma Appel Theatre in March 2023, commissioned by Tapestry Opera and Obsidian Theatre Company.

Ambrose is a graduate of Toronto Metropolitan University’s Theatre School and is Associate Artistic Director of Necessary Angel Theatre Company. She is currently in Canadian Film School’s Bell Media Primetime TV Program and was featured as one of Cahoots Theatre Company’s 30 for 30 theatre makers for their 30th anniversary season.

Thank you for taking the time to share your story! We’re looking forward to checking this out!