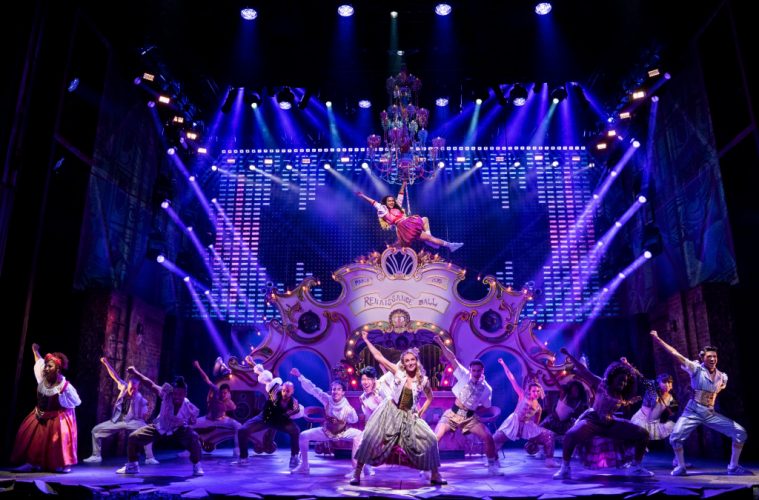 A new larger than life musical is in town and it’s already swept us off our feet! & Juliet is hands-down the hottest production this side of the border — not for long though as they’ve already announced the move to Broadway this Fall.  But first, let us bathe in all it’s glittery glory here in Toronto!

William Shakespeare’s Romeo & Juliet about forbidden love that ended in tragedy is one many of us are familiar with. A quick “Coles Notes” (who remember those?) on Romeo & Juliet written by William Shakespeare around 1594 is about the  “star crossed lovers” in a forbidden love story. Because their families didn’t approve of their love, Juliet fakes her own death. However, her messenger didn’t get the secret news to Romeo in time.  Believing she was dead, he takes his own life. Juliet wakes up to find Romeo dead and tragically takes her life for good.

& Juliet takes a few steps back and brings the story into the modern light as a romantic comedy. Thanks to brilliant creative mind of the Emmy and Golden Globe-winning writer and producer of the hit television series Schitt’s Creek, David West Read, a fresh new audience is presented with an overflowing goblet of “what ifs” in this story about love, second chances, and fresh starts. 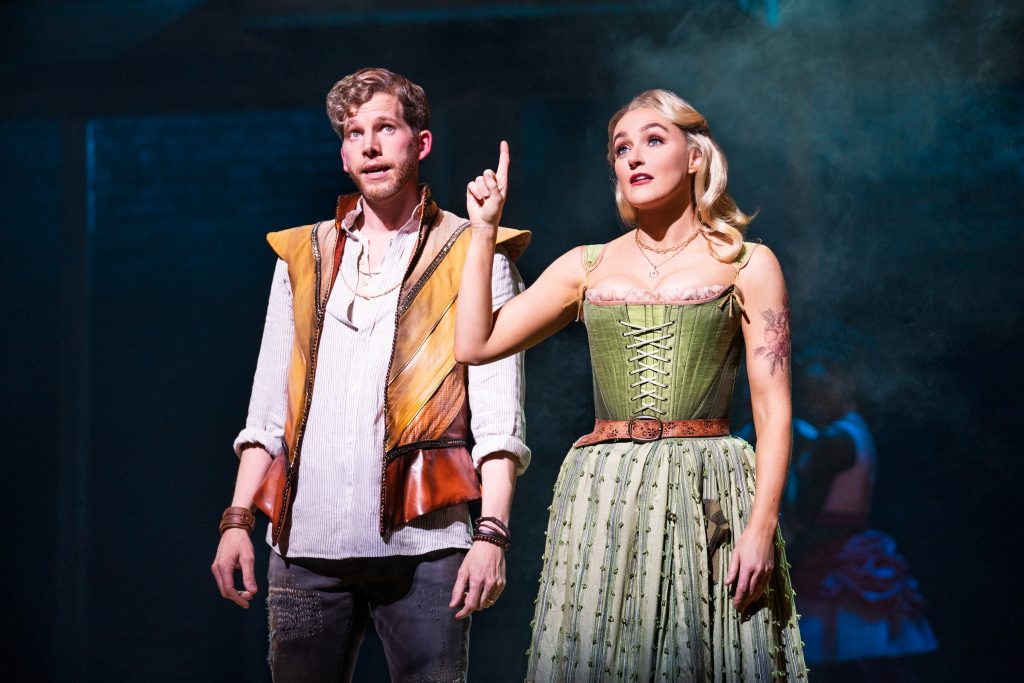 Full of puns and witty lines &Juliet makes a run for it and doesn’t stop. And this storyline isn’t a twist from what we already know based on one perspective. David West Read gives a voice to William’s wife who flips the table around.

Wait, his wife? Yes, he was married and WHY didn’t we learn anything about her in school? Er…okay, maybe we didn’t really pay much attention in high school English classes.

A little digging and we discovered IRL Anne was 26 years old when she married 18 year old William in 1582. At the time of their wedding, she was already pregnant with their first child. Were they happy? From what we can muster up, no. After all, William only left one item in his will for Anne — the “second-best bed with the furniture” (easter egg alert). Page Six would have had a field day!

& Juliet starts off with William Shakespeare (Stark Sands) having a conversation with his wife Anne (Betsy Wolfe) and what alternative endings could have happened in Romeo & Juliet. Anne gives us her vision of a Juliet (Lorna Courtney) as someone who doesn’t have to live up to the expectations of others. Someone who can be true to herself and make her own decisions in the pursue of love and happiness.

So, the story picks up where William had Juliet waking up from the fake death potion and assumes that Romeo (Ben Jackson Walker) had killed himself. Instead of the tragic ending we know, Juliet wakens to her disappointed parents announcing that she will be sent to a convent to save them from further embarrassment. That news had Juliet running away with her friends including May (Justin David Sullivan) and nanny/nurse (Melanie La Barrie) from Verona to Paris. 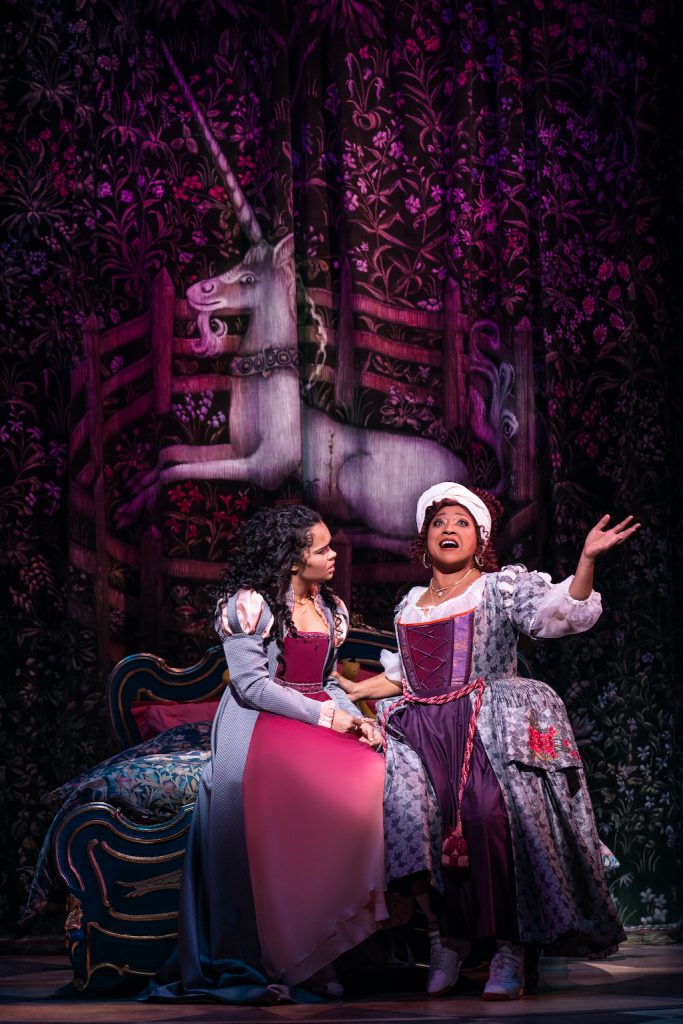 Juliet meets François DuBois (Philippe Arroyo) aka “Frankie Da Boi” at a nightclub and quickly learns that his father, Lance, (Paulo Szot) wanted him marry.  Little did she know, that Frankie was a prince and had been searching for a suitable match with no luck. He had met every potential wife in the kingdom but none had sparked any joy for him. The pressure was on. They quickly scheme to marry each other for convenience.

There were so many well written details into the script and we believe this is a musical you should experience yourself.  If you paid attention in school or are a lover of Shakespeare, you’ll probably catch many of the fun references. By the way, if your teens have already studied Romeo & Juliet in school TAKE THEM TO SEE THIS.

This production has a MASSIVE roster of talented and diverse performers from Lorna Courtney (Juliet) who took our breath away with her powerful voice and Betsy Wolfe (as Anne) who naturally serves us zingy and clever lines along with her stunning vocals. Justin David Sullivan (as May) not only pulls your heartstrings  but he does so in every damn great way.

But we cannot talk about this musical without raving about the incredible list iconic pop and boy band songs written by the multiple Grammy award-winning  record producer and songwriter, Max Martin. He’s known for a string of 1990s, and 2000’s chart topping hits and collaborations with Britney Spears, New Kids on the Block, Back Street Boys, NSync, P!nk, Ed Sheeran, Justin Timberlake, The Weeknd, and many more. 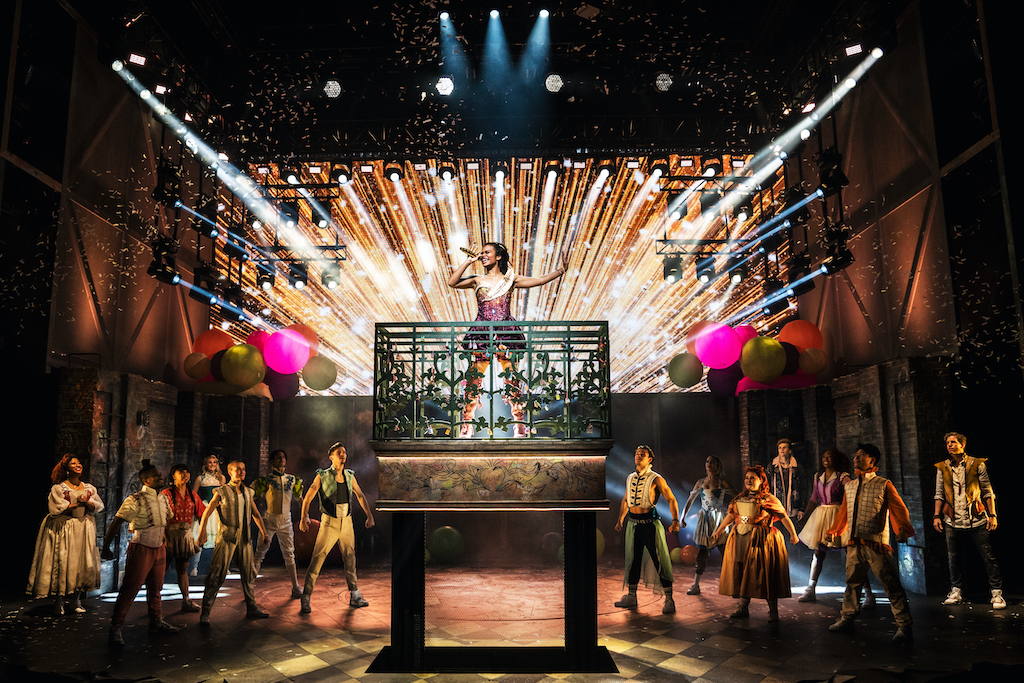 The set design and costumes smoothly intermingles styles from the Elizabethan era to modern day. Corsets and hooped skirts blended with streetwear and high tops. Marquee lights and jukeboxes with stone walls and projected tapestry. Keep an eye out for unicorn sightings!

This musical is like our 90s dream mash-up concert come to life. For pop music fans of Britney and boy bands, it will be seriously hard to not want to sing along. And the lyrics? They have taken on new meanings in this modern storyline.

& Juliet is f@cking perfect! We couldn’t stop smiling and dancing in our seats! More of this please!