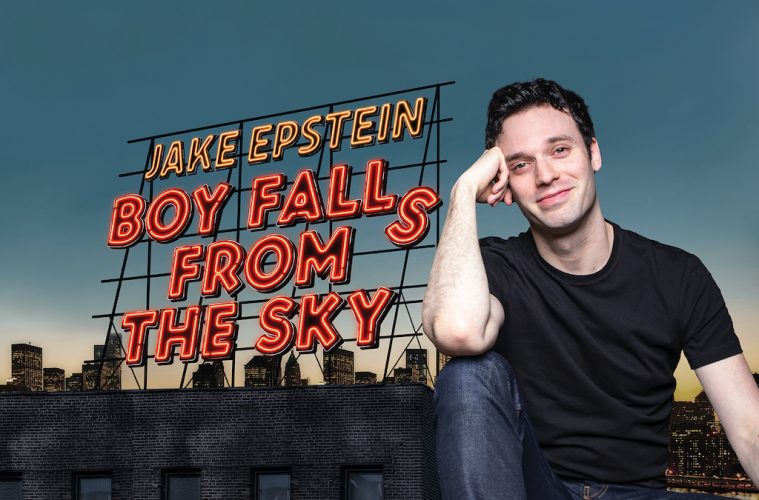 Toronto actor and writer, Jake Epstein,  first brought his autobiographical musical Boy Falls From the Sky to the 2019 Toronto Fringe Festival where it had a successful, sold-out run and earned rave reviews. Now fate… okay, Mirvish now has this gem of a show playing at the Royal Alexandra Theatre, finally! It was first pegged to open at the CAA Theatre but like many other productions in the city, the pandemic threw several curve balls at it with some of the most challenging restrictions ever scene. But never mind, we’re just happy it’s finally opened and we’re making up for lost time. The theatre piece made us laugh, hum and all misty-eyed.

In Epstein’s revealing one person show, the audience is taken on a roller coaster ride with all the highs and lows that comes with the entertainment industry. Through his experience as a performer, we learn that going for the prized roles aren’t for the faint of heart — it’s endless auditions and the relentless pursuit of dreams. There’s no business like show business, right? 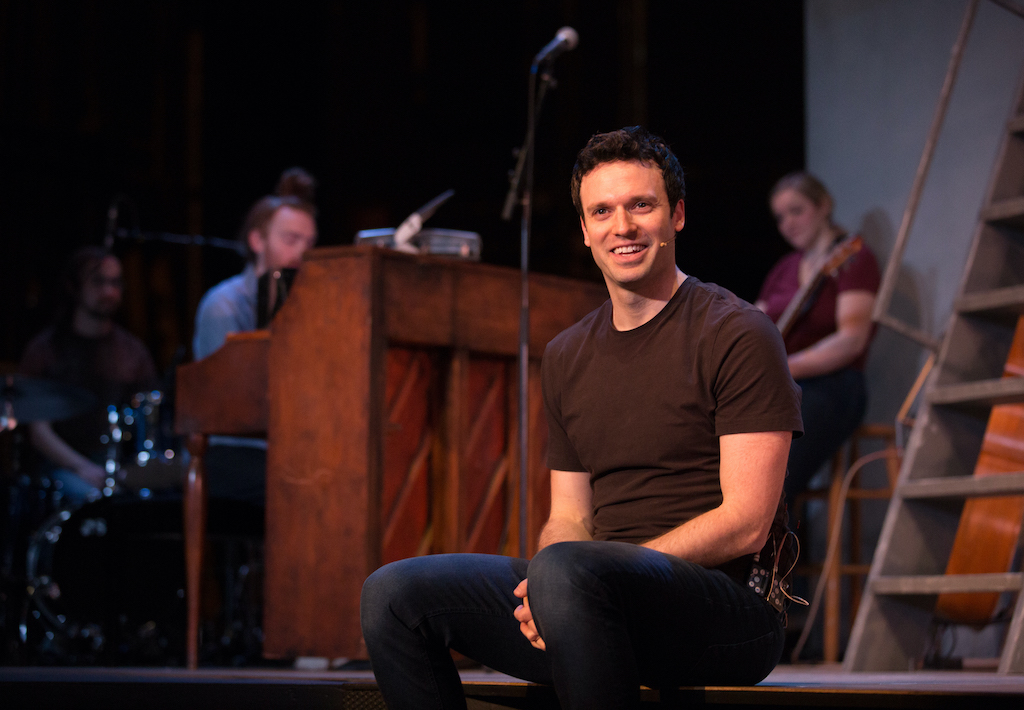 You may recognize Epstein from Degrassi: The Next Generation as Craig Manning but his career spans far greater than the popular teen drama series many of us, or our kids, grew up with (yes, he knows Drake). And really, he’s far from done. Heck, he’s only 35! The show zips through his impressive career from stage to television and back to the stage. This isn’t just a walk down memory lane with his highlights reel, this is a reality we rarely come across complete with the stumbles and fall. It’s honest, funny, and full of wit and charm.

Epstein’s first taste of the entertainment world began during his childhood when his family would take summer road trips to attend Broadway shows. He, and his sister, would belt out of show tunes from the backseat of their parents  car all the way to New York City– a place that dreams were dreamt. Lion King and Les Mis was on their car karaoke repetoire. He attended Claude Watson School of Performing Arts here in Toronto. Then, as a very young performer he landed a part in a musical that played at the Royal Alexandra Theatre. This ignited all the “awwwws” from the audience. Life has come full circle now as he returns to the same stage.

Boy Falls From the Sky tells a series of his real stories on and off the stage interwoven with familiar songs and a few originals.  He shares the success stories along with the embarrassing and even cringy moments in his career. Hey, being human is very humbling and yes, we may fumble along the way but when you follow a career that has all eyes on you, it can be daunting. But there are also moments in our careers that give us motivation to steer us back on track. In the programme, Epstein explains a time when he took his show to Lennox, Massachusetts where he discovered a deeper and more meaningful connection with the audience.  As he shared his stories, they, in turn wanted to share their own stories with him too. He was on to something.

Epstein’s tell-all reveals his experiences and audition stories from local shows that led to greater ones including landing the role on Degrassi as well as in Oliver!, the rock musical American Idiot (Will), the originating the role of Gerry Goffin in the Broadway production of Beautiful: The Carole King Musical, and landing the starring role as Spider-Man on Broadway.

An impressive career to date, for sure, but he also opened up honestly about the disappointing moments. From audition call backs and rejections and always answering repeated questions from friends and family, “everything was great” even if there weren’t –because that’s what people wanted to hear. The struggles were internalized, not that he’s asking for anyone to give him a shoulder to cry on.  Far from. This is a peek at the other side of the curtain in a landscape that is created to entertain us. Epstein’s story reminds us that even in our most embarrassing or mortifying moments, we can find ways to shake them off and move on.

Throughout the approximately 75 minute show (no intermission) he, along with three musicians accompanying him on stage, performed cleverly positioned songs including Consider Yourself (Oliver!), Give me Novocaine (American Idiot), and familiar musical numbers like Razzle Dazzle (Chicago) and  the beautiful number Gold (Once) — which made me run home to listen to the playlist repeatedly. He also performs “Boy Falls From the Sky” the title of this show but also written by Bono and The Edge for Spider-Man: Turn off the Dark.  There are a few other original songs including one about all the tall people in show business (referencing how his height had worked for, and sometimes against him in many auditions), and others that help to deliver the moments of struggles and joys.

I’ve always enjoyed the stories behind the stories. I love this gem of a show for bringing honesty onto the stage in an engageing way. Also, it had me thinking about my own life’s triumphs, disappointments and mistakes. All the things that happen to us help shape us. But it’s how we learn to pick ourselves up, dust off, and carry on that matters…and it doesn’t hurt to laugh at ourselves along the way.

Boy Falls From the Sky will be on stage at the Royal Alexandra Theatre in Toronto until May 29, 2022. For more information and tickets visit www.mirvish.com