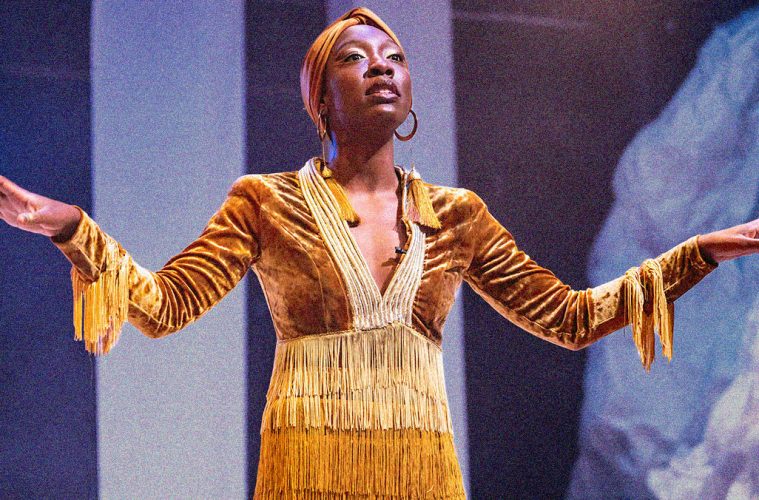 Iphigenia and the Furies has a new narrative

SonyaFebruary 20, 2022
EntertainmentTheatre0 Comments 2
Iphigenia and the Furies (On Taurian Land) is a filmed and streamed production that unapologetically transforms a myth from the ancient past into a quick-witted, genre-bending theatrical experience, demanding our generation write a new narrative for our times. This modern adaptation by Toronto-based playwright Ho Ka Kei (Jeff Ho) with Virgilia Griffith in the lead role,  is filled with revenge, love, gods, family and fun.
Ho tells us it was a bit of a happy coincidence that led him to this story. Director Jonathan Seinen first approached him to play the role Pylades in an independent production he was envisioning for Saga Collectif featuring Virgilia Griffith and Thomas Antony Oladjide. “But due to prior commitments I couldn’t do it,” said Ho. “So, I offered to adapt it instead! So, it was this random crossing of schedules that led to my taking on this story… through the process, and through working with this dream team, it was the potent reunion of siblings at the core of the story that opened up my initial impulses for the piece – something I think we can all relate to in this moment and time, that privilege of being able to connect, live, with loved ones again. That forced distance between families, all of that… it’s so felt through the story, and what reunions mean against the backdrop of what’s happening in the world, in our own communities, and in our politics… that’s what drew me to rewrite this story this way.”
So, who was Iphigenia? In Greek Mythology, she was the daughter of Agamemnon (leader of the Trojan War) and Clytemnestra. According to the story, princess Iphigenia was put on the sacrificial altar by her father, to appease the goddess Artemis.
With stories swirling, some mention that Iphigenia was not ultimately sacrificed but was replaced at the very last second with Artemis substituting in a deer. Then, was sent to Tauri and was appointed as the priestess of the goddess’ temple responsible for sacrifices of the land. Strange turn of events? Yes, enough to make heads spin. But then she was reunited with her brother and what happens next?
Virgilia Griffith plays the incredible role of Iphigenia. She tells us her character is is a lost soul. “You meet her in the midst of an identity crisis. She is trying to redefine herself and to belong somewhere. There was a lot of trauma she underwent in her past with her family and now she is in a place where she is looking for a home i.e Argos/ Taurian land.”
What is the funniest moment in this piece? It was hard to name just one but Griffith tells us there are a lot of funny moments. So, stay open and ride the wave. She does hint that audiences may find the lesson here is that the home has always been within.
Like many forms of entertainment, live theatre has had to find ways to adapt and survive during  these times. Griffith says that she’s kept her motivation by surrounding herself with people who feed her soul – and those who challenge and inspire.
Several local theatre companies have looked for ways to be creative during the pandemic by offering online performances and now we’re shifting to a hybrid format.  “There are really incredible artists finding ways to bring moving/thought provoking stories to audience members during this challenging time,” says Griffith.
She tell us returning to work on stage after these past is a real privilege especially to have that human to human connection once again. “I miss being in a theatre and the union of audience and performer.  I love that energy,” said Griffith.
Performances run digitally (streaming across Canada) from February 23 to 26, at 7:30PM, with artist Q&A’s running after each presentation. Tickets are all Pay-What-You-Can-Afford Price Points: $50, $25, $5 and are available online at passemuraille.ca.
First presented in Toronto in January 2019, Iphigenia and The Furies (On Taurian Land) was awarded the Toronto Theatre Critics Award for Best New Canadian Play, and received seven Dora nominations including Outstanding Production. This hit play is returning to Toronto as a Saga Collectif, Architect Theatre and Theatre Passe Muraille Digital Co-Production, with a bold new staging by John Hirsch Prize winning director Jonathan Seinen, featuring Dora winner Virgilia Griffith (Harlem Duet) in the title role.
Virgilia Griffith was a Recipient of the 2021 Jon Kaplan Legacy Fund Theatre Award for Canadian Stage Performer. Winner of the META Emerging Artist Award for Gas Girls by Donna-Michelle St. Bernard. Winner of the Dora Mavor Moore Award for Outstanding Performance for Harlem Duet by Djanet Sears. She was also a Dora Mavor Moore nominee for Outstanding Female in the Independent Theatre Division for her performance in Honesty, directed by Jordan Tannahill, and received a Dora nomination for Iphigenia and the Furies (On Taurian Land) (Saga Collectif) by Jeff Ho. Selected credits: Serving Elizabeth (Stratford Festival) Guarded Girls (Tarragon Theatre/Greenlight Arts); Betrayal, Ma Rainey’s Black Bottom (Soulpepper Theatre); The Wedding Party (Crow’s Theatre); Other Side of the Game (Cahoots/Obsidian Theatre); Up the Garden Path (Obsidian Theatre Company).
Here’s a teaser …