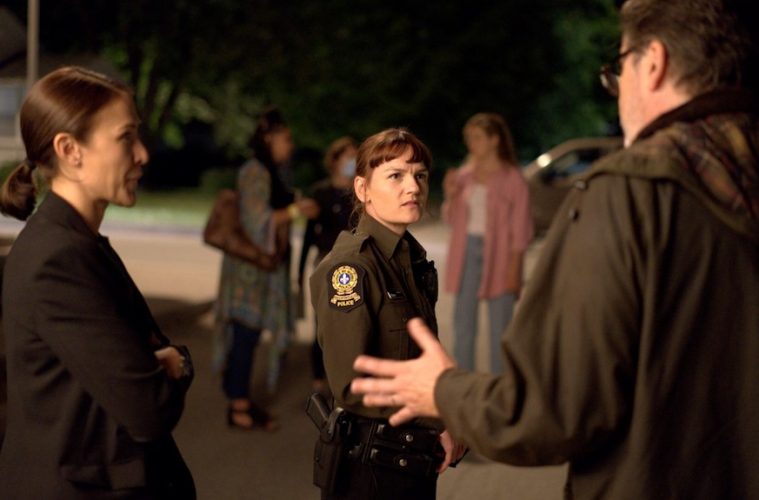 Montreal-born actress Sarah Booth stars alongside Alfred Molina in the new television series THREE PINES on Prime Video. The series based on the best-selling Louise Penny novels follows Chief Inspector Armand Ganache who investigates murders in a rural Quebec town.  He sees things that others do not: the light between the cracks, the mythic in the mundane, and discovers long-buried secrets and faces a few of his own ghosts.

Booth plays the scene-stealing accident prone, rookie detective Yvette Nichol on the new series. But she tells us the character in the show isn’t quite the same as in Louise Penny’s books.

Booth explains that when she was preparing and researching for her auditions, she realized the character originally was a little bit more hard-headed.  “She takes the advice but does things her own way,” said Booth. “She’s rude but very smart.” But instead of having that puppy energy shown in the TV series — she says her character is more of a feline. “She’s not as eager to please in the book but she wants to be right. I feel like Yvette acknowledges that she’s not always right and she’s open to learning and realizes the opportunity she has in this right place, right time for her. She has this opportunity to be trained by this rockstar of detectives and she’ll pretty much do anything to stick around.”

If you haven’t read Louise Penny’s books, that’s okay! Booth tells us to get ready for some quirky characters in the TV series — the woman and the duck is priceless. “I think what’s really fun about this series especially for people who might not have read her books is that it’s a different kind of detective story. There are a lot of detectives shows out there that are a lot darker. You know, like the detective is dealing with addiction or maybe his wife left him, but this one is different. They are going to fall in love with the main detective and he has a very different way of solving crimes. He gets into the psychology and all the layers. So, expect something different but with also some familiarities of a whodunnit.”

She also explains the storylines are presented in two-episodes and each story  represents one of Louise Penny’s murder mysteries.  There’s also an overarching storyline throughout the first season that brings awareness to the ongoing and very real issues with missing and murdered Indigenous women and girls.

In the first two episodes there was a lot of attention placed on one non-Indigenous woman against the backdrop of an entire community trying to seek justice and answers for many more.

“I was so proud of how they approached the storyline,” said Booth. She explained the creators of the show brought in Indigenous actors as well as Tracey Deer, an award-winning director (Beans, Mohawk Girls) who is from Kahnawake which is just south of Montreal.

Booth also tells us Deer directed episodes 3 and 4 that focused on Residential Schools and it was all told with incredible thought and care. She explained how organizations within the Indigenous community were brought in to consult on the scripts. The creators were there to listen and learn. It was more like ‘we’re here to help you tell your story.’ This was important and everyone wanted to respect that. “I think it’s really going to be an eye opening story line for many that might not be aware of what’s going on in Canada. This specific story line is fictional but inspired by way too many situations,” said Booth. “There are some Kleenex moments for sure.”

Three Pines, is a fictional town both in the Louise Penny’s books and in the TV series, inspired by a charming small town called Knowlton in the Eastern Townships in Quebec. Booth grew up about an hour southwest of Montreal and she tells us some of the locations were as close as 20 minutes from where she grew up.  During filming her mom would visit the set and had a chance to hang out with friends and family on the weekends.

“You can find a lot of the buildings that inspire the places in the series and in the books. With the filming location they found this wonderful tiny little town that has about 200 people spread out so the downtown core was five houses. They took over the town for about 6 months and it became our Three Pines.” said Booth. We’re pretty sure the locations will probably become popular  tourist destinations. Here’s already a link!

Booth tells us she grew up in a town of about 2000 people so this is all very relatable. “It was very bilingual – half English and half French so everyone speaks Frenglish. It all felt very authentic to what I grew up and was surrounded with.” And her accent in the series? She tells us it’s her mom’s accent.

Since we always believe that we’re constantly learning…what did Booth learn on this production?

She tells us this is her first “series regular” role. As regular in the cast the approach to the role is different. “You get to just have more hands in the dirt when creating this character and when you’re rehearsing the scenes. It just feels more involved  and you feel like you own the character even more.”

And as cliche as it might sound, Booth tells us that being on set and with a crew for that long they all became family. “They were so helpful in the creation of my character too. You’ll see she has a lot of props. She has her belt and she doodles and have nik-naks. It twas really fun to create the character with everyone.”

The show hit the top 10 within the first week of streaming. How did she feel about that?  “Yes, in Canada it hit #1 very quickly. In the UK, we were #2 and in the US we hit #3. It’s wild. I mean it’s a great series and we knew it would be great but it’s kind of an out of body experience,” said Booth.

So, what next for this actress?

“I really enjoy doing comedy so I’d love to do that but to switch things up I’d love to do an action movie– I have a stunt background so I would love to do a kick ass action movie!” Said Booth. “Right now I’m also in a film called Last Call  if you want to see a different side of me. It’s a one-take feature that’s out on Prime Video and also on Peacock. It deals with mental health and suicide.”

Sarah Booth is a Canadian born, classically trained actor. She is a regular on the upcoming series Three Pines (Amazon Prime) from the producers of The Crown and appeared as a Guest Star on Law & Order: SVU (NBC), Star Trek: Discovery (Paramount+) and Heartland (CBC). Sarah trained in Montreal and continues to work on stage, including her critically acclaimed performance as Una in Blackbird. In 2018, Ms. Booth was the recipient of ACTRA’s inaugural Breakthrough Artist of the Year award. Recently she was awarded Performance of the Year in Canada for the single-take feature Last Call.

Sarah used to save the day in Universal Studios Waterworld live stunt show and challenges her adventurous spirit with horseback riding, running and fitness.

Thank you to Sarah Booth for taking the time to chat!