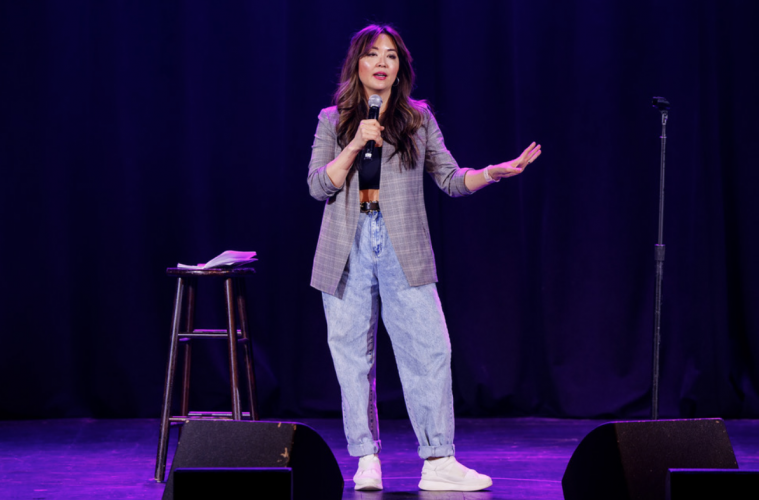 Canadian comedian Julie Kim is considered “one to watch” in the entertainment world. Not only is she currently opening for Ronny Chieng (The Daily Show with Trevor Noah, Crazy Rich Asians, Netflix ) on his The Hope You Get Rich tour across North America with her amazing stand-up skills but she’s also on the writing team for the JUNO Awards working directly with host Simu Liu (Marvel’s Shang-Chi and the Legend of the Ten Rings, Kim’s Convenience).

Her career is already something to cheer about. She’s been a writer and performer for The Debaters, Laugh out Loud, and she’s worked on CBC’s smash hit television series, Kim’s Convenience. In 2021, she joined the Creative Consulting team at the Winnipeg Comedy Festival and continues in that capacity this year.

We wanted to learn more about this two-time Canadian Comedy Award nominated comedian and how she got to this very exciting moment in time.

“Starting stand-up comedy was supposed to be only a part of a more general path to becoming a really good public speaker,” she tells us. “I dared myself to try it just once before I died, just to do this very hard thing and perhaps talk about it at parties or dates. That was over 10 years ago!”

Kim then took a couple of weekly introductory stand-up courses in Toronto. “They were okay,” said Kim. ” There were actually some very ‘old fashioned’ things I learned in the course that now make me cringe so hard. For example, I was told that if a comedian is attractive, they have to be self-deprecating or dress down so they don’t intimidate audience members in a way that makes them put up walls. I was also taught that men in the audience don’t like to hear women sound like they’re nagging, as it reminds them of their wives and mothers. Wow!”

But Kim tells us the real learning came from being on the actual stage, as well as writing and re-writing jokes. “I spent the first few years getting on stage as much as I could. I watched professional stand-up comedy at the two comedy clubs in Toronto on weekends. I’m grateful for all of the professional Toronto-based comedians I was able to learn from, especially the ones who were welcoming and kind to me.”

Okay, we admit to happily going down that rabbit hole of watching YouTube clips of Kim’s stand-up comedy skits. LOL Much of her material came from personal experiences (and very relatable)  from dating to having babies and aging and sometimes even from an Asian perspective.

“Well, I’ll joke about anything that’s funny to me,” says Kim. While she doesn’t purposely cater her performances to women, moms, Asian people, or any particular demographic, she’s been more open and bold when talking about gender and race in the past few years, but maybe not anymore than most people have.

“I really love that many people who enjoy my stand-up are women, and I get very heart-warming messages from many who say that I make them feel seen and heard,” said Kim. “But it’s not what I set out to do – my main job is to make people laugh and have a good time. After shows I get nearly as many new followers and messages from men as I do from women, and from different ages and cultural backgrounds.”

As a writer Kim also has a fun perspective on the other side of the table.  “I did have the opportunity to write a little bit for Kim’s Convenience a few years ago. I’ve also written for radio and TV in other capacities. I have been spending more time writing lately and recently signed with a literary agent. In fact we’re working on a new sitcom idea this year (I can’t talk about it yet!).”

Of course stand-up is her first baby. She tells us this is where she gets to be her real authentic self for both writing and performances. “That always feels amazing. What I also love is having a variety of outlets for my creativity, and multiple spaces to learn and grow. I’m very excited about where I’m taking my life.”

The world of entertainment can be ruthless at times so I we were curious if there were any challenging obstacles she had to overcome as a female in the industry?

“Whoa – big question! For sure, I have experienced the many challenges that block females’ progression in comedy. And the intersection of being female and Asian is so complicated, comedy notwithstanding. It’s heavy and taxing stuff that I don’t often stop to think about, so I usually ignore most of it and plough through. I’ve got a small child who deserves me at my best, and I’ve got people to entertain,” said Kim.

“I’m really glad that there have been more female comedians coming up in the last few years. Some of my favourite comedy bookers around Vancouver are female and LGBTQ+. There are also several powerful female executives and festival producers, including: Zoe Rabnett, Brandi Bertrand, Lauren Mather, Sheri Rowe, Kim Hendrickson, Christina Edwards, Stephanie Fast, and Courtney Hicks. So that’s the good news!” 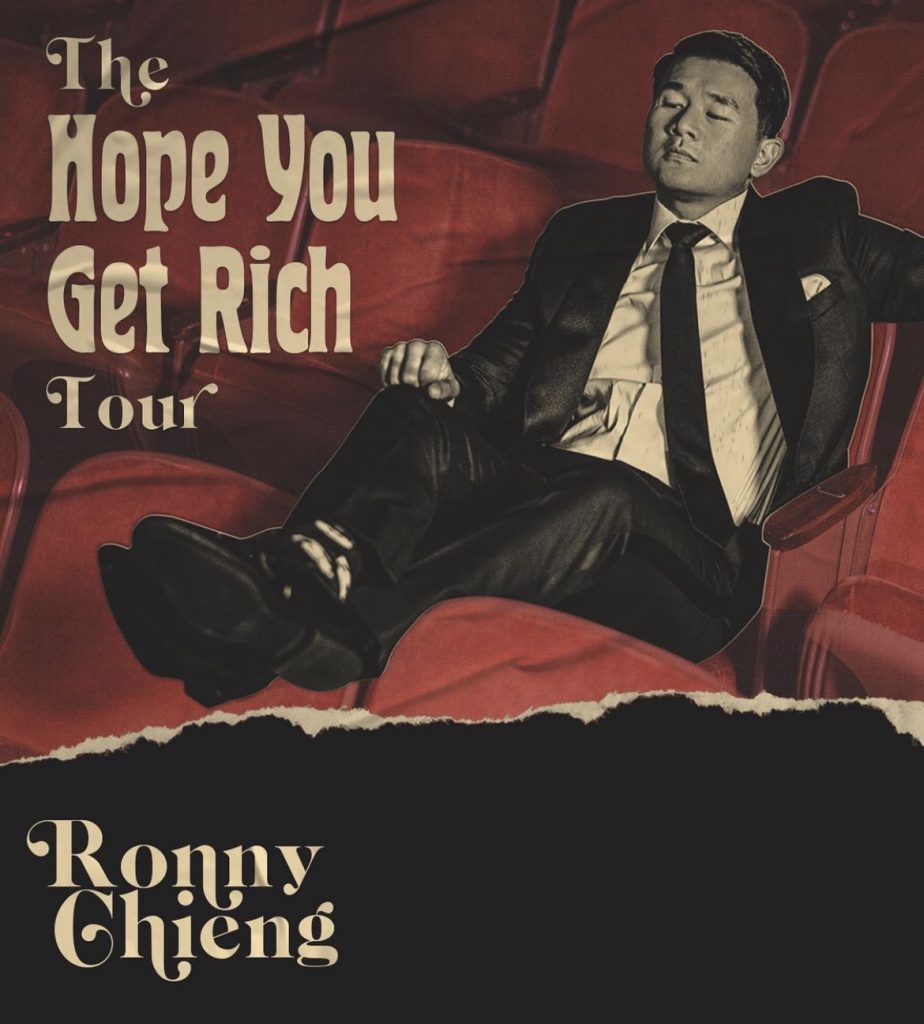 Now opening for Ronny Chieng on this North American tour sounds fun and exciting. (We bought our tickets already! Yay!) How did this opportunity come up?

She tells us they’ve worked together a few times in the past few years and when she found out he was embarking on a big North American tour, she  asked to be his opener. “You always have to ask!”

Okay, if Kim wasn’t making people LOL and working in the entertainment industry what would she be doing?

“I would be a super ruthless (and stylish, of course) lawyer or a lobbyist – the kind you’d see in a Shonda Rhimes show. I’d fight to abolish anonymous online accounts. I would also push for the strictest punishments for predators and those making threats of death, rape, exploitation, and other harm to other people. We know that these comments are disproportionately directed at women and girls, and they wouldn’t happen at this scale if people made these threats as their identifiable selves.

My hope is that this would make the cowardly and hateful people behind the comments go back to keeping their gross views inside, or calming down because they don’t have an outlet to stoke their own toxic fires. Doesn’t matter which one.

We could fix this. I hope someone is working to fix this. Well, that wasn’t a very funny answer at all! But as you can tell, I have thought about this. :)”

Having worked in both Canada and US — are there any differences in how she’s been received by audiences so far?

Kim tells us she finds that it’s more about the city than the country. “I love major cities with smart people, progressive policies and attitudes, and diversity in multiple ways. Some of my favourites are Chicago, New York, San Francisco, Seattle, Portland, Toronto, and Vancouver.”

Ronny’s tour is coming to a close in a few weeks and Kim is excited to have some Canadian shows coming up! She will be headlining The Comedy Nest in Montreal from March 24-26. On April 17th I’ll do my own show in Toronto at the Comedy Bar Danforth . I’ll also be returning to the Winnipeg Comedy Festival in May to do a Gala performance that will be later aired on TV.

As mentioned, she will be a writer for The JUNO Awards in May, for host Simu Liu. “Writing starts soon and I’ll be there on the day with Simu as well. That’s a big one that I’m super excited about!”

Kim will also continue to book more and more performances, as all comedians do and hopes to put together a Canadian tour to start in the Fall. “I’m going to try to fit in a trip to Hawaii in August with my family for a vacation, but of course I’ll be doing shows at night. :)”