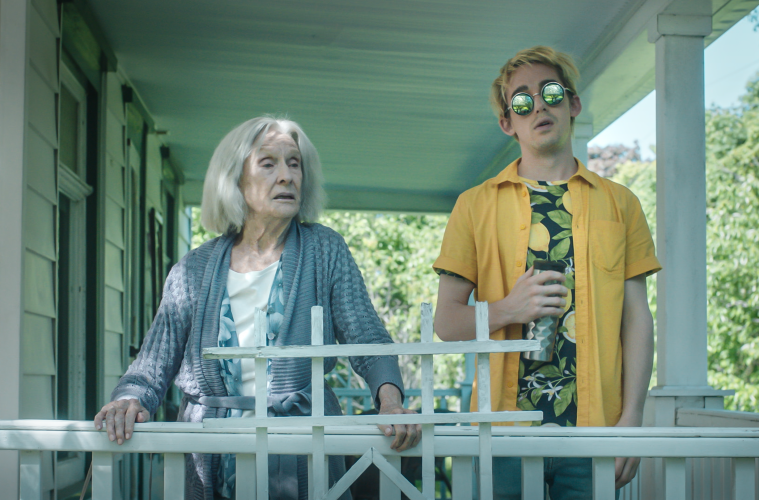 SonyaMarch 4, 2021
EntertainmentFilm0 Comments 0
Jump, Darling stars the late Hollywood legend Cloris Leachman in an extraordinary final performance with the very talented Canadian actor Thomas Duplessie in writer/director Phil Connell’s debut feature film — an offbeat LGBTQ family drama that follows a rookie drag queen reeling from a breakup who moves in with his declining grandmother to protect her from the local nursing home.
Duplessie was born and raised in New Brunswick. He moved to Toronto in 2008 to study theatre and television. He’s already clocked in a few roles under his name including parts on Murdoch Mysteries, Man Seeking Women, Reign, and Bitten among others.
Jump, Darling was filmed in the picturesque Prince Edward County in Ontario and includes a  supporting cast of JUMP, DARLING with industry veterans Linda Kash, Jayne Eastwood and cameos from well-known drag queens Tynomi Banks (featured recently on Canada’s Drag Race), Fay Slift and Miss Fiercelicious. The film showcases six on-screen drag performances against a pop soundtrack including Robyn, Allie X, Rough Trade, Years & Years and more.

Jump, Darling will be available for digital rental across Canada (VOD on Rogers, Telus, and Shaw), iTunes and Google Play beginning March 9.

I had the opportunity to interview Thomas ahead of the film’s release date.

What inspired you to get into acting?

TD: After I saw my first play in the 4th grade I was hooked and couldn’t wait to try my hand at theatre. It wasn’t until about high school that I became interested in screen acting after watching greats like Robin Williams, Philip Seymour Hoffman and Al Pacino.

Your character Russell is an amateur drag performer who escapes from the big city and heads to a small town. What do you wish audiences to know about your character?

TD:I want audiences to know that although Russell is chasing a career in drag, his path is pretty universal. He’s somebody stuck at a crossroads in life and making major decisions about his future and what he wants out of it. He chooses to follow his heart despite how hard that will be and I think most people are feeling, or have felt that, at some point in their life. Audiences will connect with Russell’s story more than they think.

Jump, Darling – what can you tell us about the title?

TD: I know that Phil Connell (director/writer/producer) originally used “Jump” as a working title, but wanted something more to add to that. The team experimented with a couple of different titles, all with “Darling” in them, as that’s what Cloris’s character calls Russell in the film. They ultimately settled on “Jump, Darling”.

In this film you worked alongside drag queens Tynomi Banks, Fay Slift and Miss Fiercelicious. Did they offer any advice for your role?

TD: They didn’t offer advice on the role, but I did learn from watching them perform in Toronto over the years. They taught me to leave my ego at the door and give it all you’ve got. If you’re not feeling yourself 100%, the audience will know it, and your performance won’t translate.

What do you wish people knew about the world of drag queens?

TD: Real queens can speak to this much better than I can, but as a performance artist myself (as an actor) I wish people knew that it isn’t just a hobby, it’s your life. Every decision you make is based around “how will this affect my career.” It’s a constant hustle. There really aren’t any days off.

Your character Russell and his grandmother (played by Cloris) had a really special bond in the film. How about off camera what was she like?

TD: We got along great off camera. We were constantly pulling faces at each other between takes and making each other laugh. Over dinner one night she started spitting her corn at me from across the table. Cloris had no filter, but she was a joy to be around.

Working alongside the late legendary actress, Cloris Leachman, was there any learning from her that will stick with you forever?

TD: She showed me how to be in the moment. She was so present and spontaneous in every take that she forced you into the moment with her; you kind of hopped on that train and went where it took you.

What else have you been working on during COVID times?

TD: COVID has given me a lot of time to catch up on reading plays and scripts that I’ve always wanted to read but never got around to. Mostly the classics. Aside from some commercial work and a workshop here and there, I’ve been taking the auditions as they come, and have been trying to get the word out there about Jump, Darling.