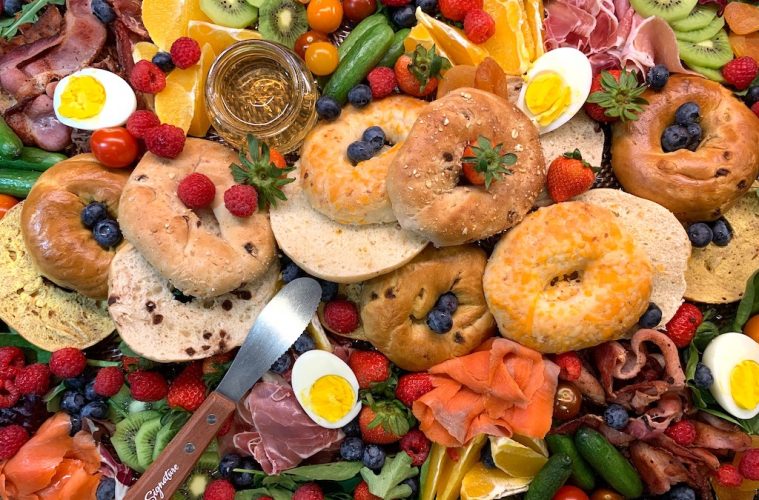 We’re always interested in the origins of foods, customs, and traditions. When we learned National Bagel Day was on January 15, we thought we’d do a little research. The round chewy bread item is shaped like a donut but of course, much denser and is enjoyed by several cultures. They can be savoury or sweet.  It’s a go-to that keeps us full for hours. But here are some interesting and fun facts we’ve discovered about the bagel.

The history of the bagel can be referenced back to its Eastern European, Polish and Jewish origins. According to Maria Balinska, author of “The Bagel: The Surprising History of a Modest Bread”, the much-loved baked-good links back to the defeat of the Turks by Polish King Jan Sobieski in 1683, the Yiddish cultural revival of the late nineteenth century, and Jewish migration across the Atlantic to America.

The first known iteration of the bagel was in the 14th century. It was more akin to a pretzel that was served in German monasteries and made its way to Poland. Eventually the bread took resemblance of a circle with a whole in the centre and was known as obwarzanek. Then Queen Jadwiga made the bagel fashionable as she gave up her extravagant sweets and pastries for Lent. However, it was noted that such baked goods were enjoyed by the upper class since wheat flour was only afforded the wealthy.

Another origins story swirls about a baker in Vienna who invented the bagel in the 17th century. It was considered a  tribute to the King of  Poland who loved horses. The “baegel” shape was said to resemble the shape of a “stirrup” — which is what baegel was translated in Austrian.

We found out also that the German word “bougle” means “bracelet”. In Yiddish, “beygle” means “ring” — they all makes sense!

We also learned that bagels were offered as gifts to women after childbirth in the mid 1600s in Krakow, Poland. It is said that the round shape symbolized good luck and wishes for a long life.

The bagels made the transatlantic trip with Eastern European settlers arriving on the shores of North America in the late 19th century. In a Smithsonian Magazine article, writer Amanda Fiegl mentions the bagel didn’t actually gain mass popularity in America until the 1970s. “That was the era when ‘ethnic food’ became trendy, and it was also when an enterprising family named the Lenders began marketing their brand of frozen bagels—’the Jewish English muffin,’ they called it—to the masses through witty television ads.” she said in her article. You can read more here. 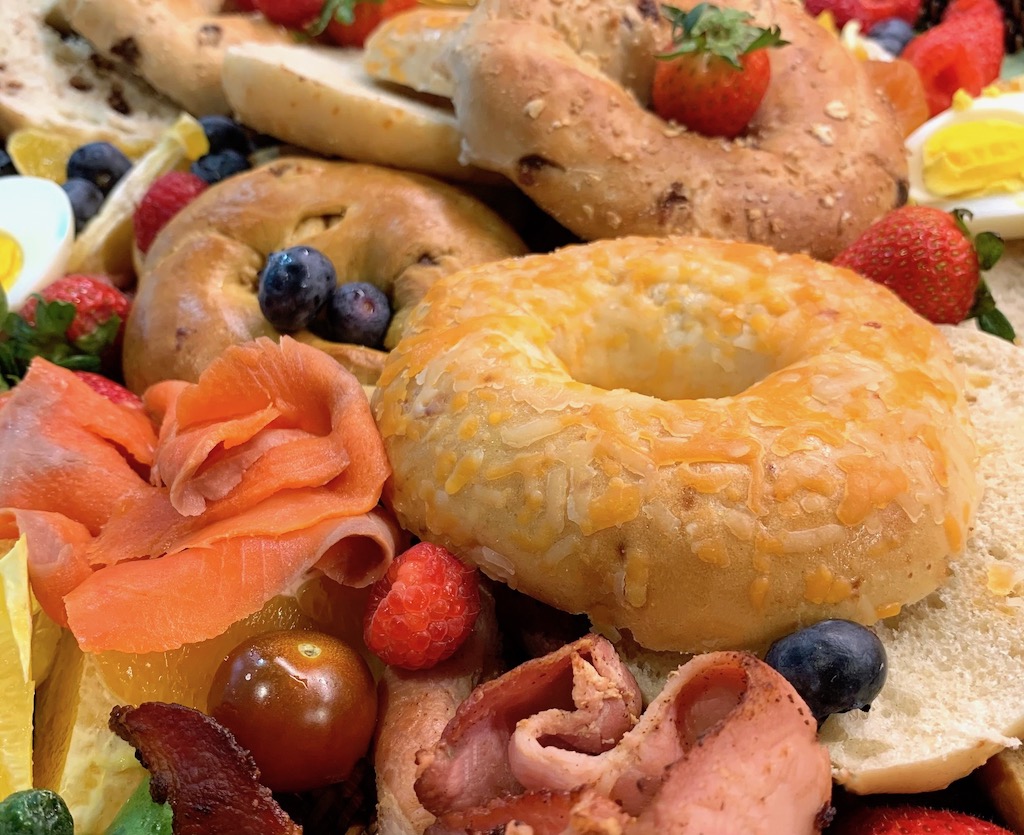 There are different styles but the two most popular here in Canada are commonly known as Montreal and New York. What’s the difference? It’s a conversation that comes up often.

The Montreal style bagel is  smaller in appearance. Where the New York is bigger, softer and more chewy. The texture of the New York style, when fresh out of the oven, has a slight crunch that gives way to a softer bread inside. We also love toasting our New York style bagels to get that fresh out of the oven texture and taste — slathered with butter that melts into the bread, yes please!

Montreal style bagels taste slightly sweeter than others and the texture is chewier and more crusty. The dough is made with eggs and honey. The dough is shaped and boiled in a water that also uses a hint of honey (and no salt) before being baked in a wood-burning oven. True bagel lovers know they won’t necessarily need to slice the Montreal style nor do they need anything added —  although spreads are happily added on top or dipped. Real Montreal style bagel lovers won’t even think about toasting it.

By the way, did you know that bagel is the only bread that is boiled then baked? This goes for both styles.

Why the hole in the middle? The original breads left the centre open for two main reasons we’ve learned– to help with a more uniform baking process and the bagels were slid onto a wooden stick and carried to the market to sell. 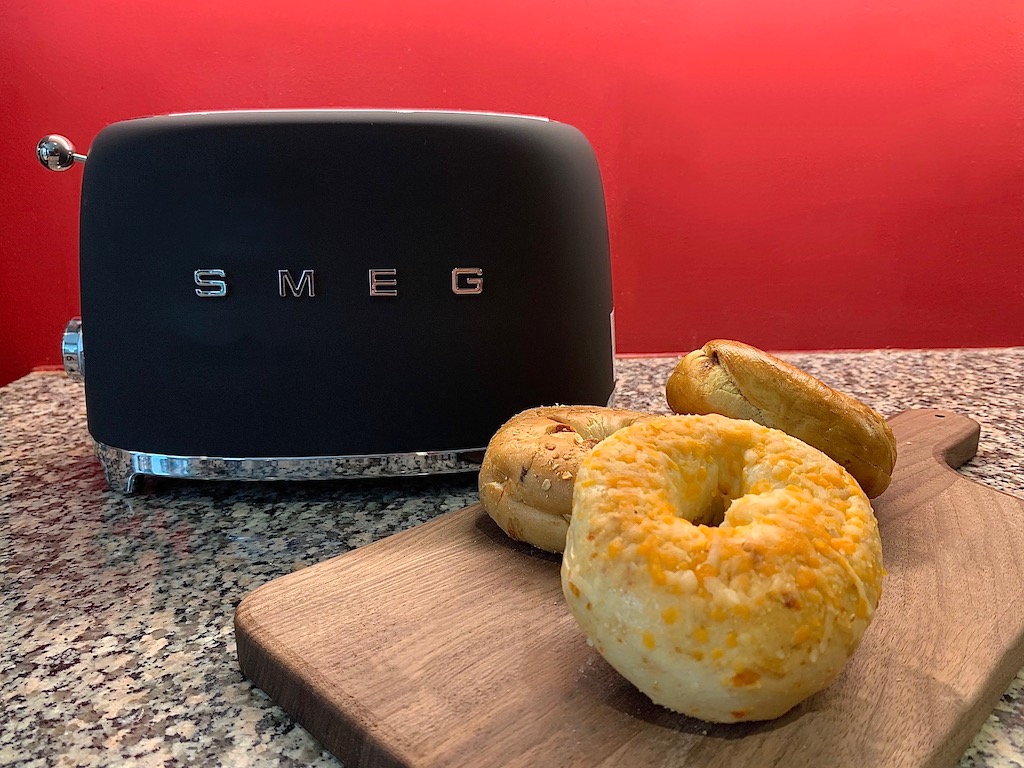 Today, bagels can be found in many places and there are many more flavours to enjoy. We were delighted to try the new line of Dempster’s Signature Bagels (shown in our photos) that are made right here in Canada. With over 100 years of experience and 12 bakeries from coast -to-coast, we’ve learned that their baked goods are made with Canadian flour sourced right here supporting our Canadian farmers.

We’re happy to recognize National Bagel Day  with this colourful bagel brunch board!

*food styling and all photos by Sonya Davidson