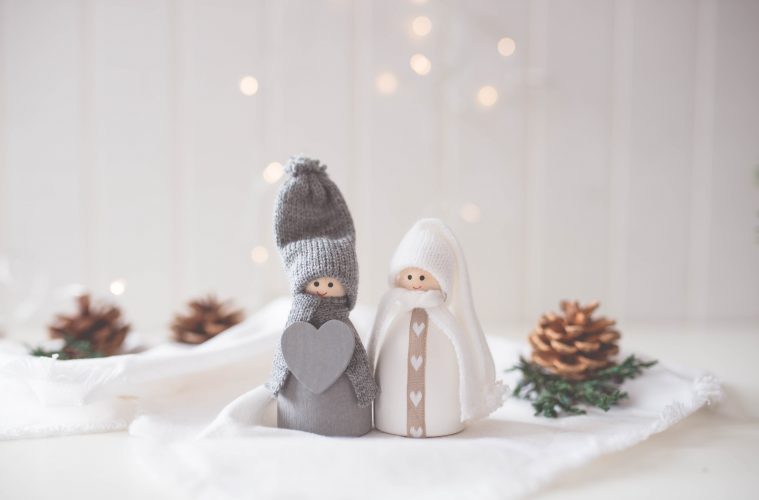 It may be some of the darkest days we’ve had to muddle through collectively. Trying to make sense of it all and wondering if we’re ever going to get back to “normal” is on our minds, whatever that is. I don’t know, I’m actually kind of excited for some of the changes that are happening in the world. But we are now entering the holiday season when even at the best of times can bring sadness and loneliness to many. It’s supposed to be a time of cheer and festive joy, right?

My first real encounter with holiday blues came when I was doing some promotional work with a national candy company helping to develop their holiday program. Gum drops danced in my head and sleighbells rung, quite literally.  I’m someone who’s always loved Christmas so I was young, eager and all in. But I’ll never forget that day.

Funny, now that I think of it. I didn’t grow up in a home where Santa was expected on Christmas Eve. Christmas for us was about lots of family and family friends being together into the wee morning hours. Parents would play mahjong while the kids played games and watched non-stop movies on the television. We would eat ourselves silly until we all dropped to the floor and dozed off only to have our parents scoop us up one by one at 4 am. There were no mentions of Santa and getting to bed before he arrived although for some reason we would hear on the radio that Santa was being tracked by NORAD. We were all together. That’s all we really knew. We never really questioned if Santa was real, or not. We never expected tons of presents under the tree. Just one from our parents. There was no big production of setting up cookies and milk until we had kids of our own – we actually left out sushi and green tea for years since our kids felt Santa would need a break from all that sugar. We’ll save that for another post.

But back to that client. The program was in place and back then, holidays in retail didn’t really start until December 1. Everything was given the green light. Until one day the client insisted that I met him at the warehouse where everything was being shipped. He insisted on meeting over the weekend. Worried that something had gone drastically wrong, I spoke with my manager and although she preferred that she went because if anything was amiss, she would be better equipped to handle things in a pinch. He insisted it was me.

Back then, cell phones were not the norm. It was really for upper management. They were big and blocky. So, I went and asked the cab driver to stay nearby. It shouldn’t take long anyway.

When I arrived the client greeted me with a hug. But my gut instinct told me that I wasn’t in danger. Or maybe I was naive. We went inside the warehouse filled with candy and point of purchase stands that were ready to be shipped out. No one else was there and I started self-doubting my gut instinct.

We walked into the warehouse with skids upon skids of holiday candy that were piled at least 7 feet high. I remember standing in the middle of candy skids amazed sights and scents of sugar and telling him that this was heaven to me. The client sat down and began to cry. He called me in to tell me what Christmas meant to him.

It wasn’t happy. It wasn’t joyful. It was a time that was really hard for him. I was not prepared for that. He told me that he had not celebrated Christmas for a few years. He didn’t have family here. He didn’t want to bother his friends who were celebrating with their families. So, while all the commercials, shows, and music suggest gathering with the ones you love, he couldn’t. It was a sad time for him as the year was winding down to an end.

But he said working that year with me on that campaign brought him some light. What was that? It was the first time someone had mentioned that to me. I asked him what that meant.

I remember him saying that he noticed how I found joy in the little things. The sparkle on the candy. The fresh first snow on the ground. The smell of not so perfect but fresh-baked sugar cookies that I had brought into a meeting. All of the sudden, the perceived notion of what Christmas looked like turned into being grateful for little things. Like, really little things.

He said it was the first time he had felt the spirit of the holiday season in a long time. We just sat and chatted for an hour, maybe more.

After that encounter, I’ve been conscious of what Christmas meant to others. It’s different for everyone. Yes, I still love everything about the holiday season and I’m eager to put up our Christmas tree early, but I often think about this client.

We can’t change how people feel. We all experience things differently and there is no right or wrong. But the will to learn and understand another person’s point of view without judgment or calling out on social media these days is important.

If we begin a sentence with “I don’t understand how someone…..” then it’s time to stop, listen and learn.

It’s a different kind of year. At this point, we don’t know what Christmas will look like — if we can spend time with our family and friends is all up in the air. It may be a harder time even for those who you think are strong and happy along with those who are quiet and out of sight.

Be kind. Be patient. Be understanding… not only to others but also to yourself.

This year, we are all given a gift of time. So, make use of that time to say hello, maybe a chat…like a real live chat – on the phone. Write a note. Send that card. Make someone a playlist. Put that tree up early. Bake yourself some cookies. Tell someone what they meant to you. You can be that light. Remember, it doesn’t have to be on display for the world to see.

Slow down — I mean really, we are being forced to anyway.