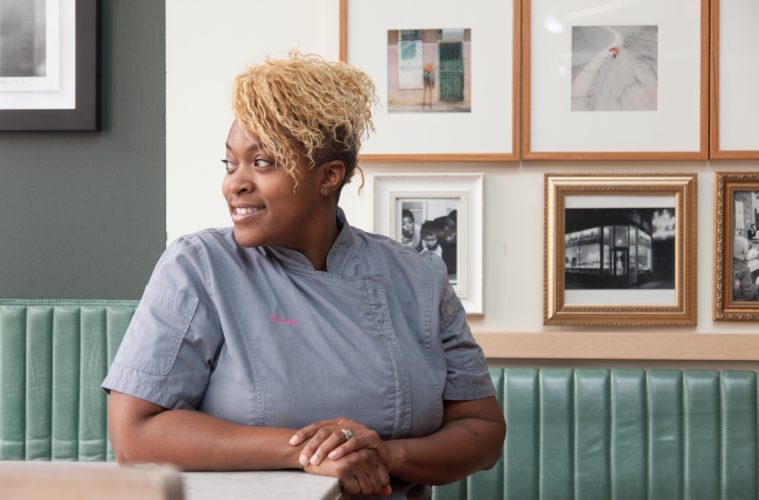 Chef Suzanne Barr may only have arrived in Toronto six years ago, but her presence has had a ripple effect throughout the city and culinary industry.

Her undeniable impact has been making waves, whether through her immensely popular Saturday Dinette restaurant to her more recent contributions on Wall of Chefs, the mother, wife and former MTV Executive Producer is so far from cookie cutter she’s almost impossible to properly encapsulate.

Her enthusiasm for cooking is downright infectious, and her unbridled creativity and magnetic personality are the secret sauce to her success. She’s the type of person you just want to be around, instantly boosting and building up everyone around her. She’s an ally, in the truest sense of the word. And she’s just getting started.

It started as a career in film, television and photography. Suzanne was steeped in the NYC experience and used that as a backdrop to stoke her creative fire.  After working her way up through the ranks at MTV, Suzanne found herself further and further away from set, each promotion garnered respect and acclaim, but she missed that artistic energy that was her drive. Suzanne had always loved cooking with her parents growing up. Her father, who was a photographer, often dreamt of opening a family patty shop. Pivoting to the culinary world was a natural fit. Suzanne enrolled in a local culinary school.

“I recognized I had hit a wall creating a job that centered around me just being an artist, and loving what I did, but I was removed from that, I was producing and I was pushing numbers, I was at a desk, not on set. I missed being engaged, I missed talking to people, and doing something that actually made an actual impact. I stopped working with a smile on my face knowing that whatever life would bring me would be the right thing.”

Gratified by learning with a diverse group of talented Chefs (Amanda Cohen and Bryant Terry are notable inclusions) Suzanne’s passion for cooking and learning were on full display, but when her mother was diagnosed with cancer, she moved back to Florida to care for her full-time.

“I knew I needed to understand more about food. Losing my mom to cancer, and being her caretaker, I cooked for her, but couldn’t cook for her in the way she needed because I had no training. Coupled with being around with all these people who cared so much about food, I knew that I wanted to grow in my own education and experience, like how do I chop an onion properly, or cooking for someone who has celiac, or cancer. Or cooking Ayurvedic methods. ”

Suzanne had a clear focus on what was important and sought to further her culinary training by traveling to Hawaii to learn plant based and vegan methods of cooking. After four months learning in ‘the most beautiful place on earth‘, she returned to NYC and bounced around the restaurant scene, before working as a private chef. Cooking for a family for five years, and in just as may cities and countries, Suzanne found herself smitten with France and left her position to explore life and learn French food inside and out. Her boyfriend, (now husband and business partner) Johnnie Karagiannis joined her, and together they immigrated back to Florida to soak up the sun in Miami until his visa ultimately ran out.

That’s when Canada came calling. Suzanne spent much of her formative years here, with an extended and blended family of aunties, uncles and cousins providing a foundation to start a new life. She continued cooking after arriving in Toronto and started a catering company before launching the darling Saturday Dinette on Gerrard Street. The restaurant was an instant hit, regularly drawing queues around the corner for Suzanne’s sunny brunches and burgers. But when a legal dispute with her landlord began brewing, she was forced to shut the doors after three years. Saturday Dinette was her first baby, she almost gave birth to her son there. It was a loss to have to walk away from this project, but Suzanne bounced back quickly, taking consulting gigs with The Gladstone, Avling Brewery and in Prince Edward County before landing at True True Diner.

“I am so blessed to be in Toronto, it has given me so many opportunities to engage in awesome conversations and platforms with inspiring people, like Lynn Crawford on Wall of Chefs. And numerous other chefs I’ve had a chance to cook and engage with and share special moments. I hope my next chapter in some part includes teaching. George Brown College has been knocking, kicking down the door! I do believe it starts in that environment. I’m trying to create that space for both.”

Currently, that space is True True Diner. Originally brought on as a consultant, Suzanne helped the struggling King East eatery with the concept, menu and general tone of the space. The space was a ghost-town, most orders came through delivery apps. The room was wasted. Suzanne became part-owner and made subtle changes to the design, function, and menu but most notably the direction and vibe of the restaurant.

“We wanted to create a space for a chef series that we’re creating that focuses on young people of colour that are doing incredible things but don’t always get the chance to create the food they want, because they’re working in the industry, working to live. Monday nights we’re closed so we’re inviting them in to allow them to be creative in the space. I’m a big supporter of FoodShare Toronto, where I’m on the board. I’m not just using my voice, I also have a space again. Making sure our staff is safe and secure and making interesting food, that’s the focus.”

With appearances on the Netflix doc The Heat and Wall of Chefs, Suzanne’s television talents are front and centre again. Dividing her time between her various cooking engagements and being in the media spotlight, Suzanne is energized to engage with her audiences and receives emails from people around the world that resonate with inspiration and appreciation. It’s well deserved. And that impact will be tenfold- she currently has a slew of projects in the works including her first cookbook and a screenplay.

“I want to tell stories of how food creates these stories of nostalgia and why. I want to see ways and showcase ways that I can do that, but not from a singular way of thinking. I can make an impact in so many more ways. That type of engagement is a big part of me. In the next ten years I’ll find my way back to it, telling stories about other people of colour, we have so much rich history and ways to tell those stories. I’m grateful that I’m not someone who sits back and waits for opportunities. I create opportunities, and not just for myself, but for those after me. “

It’s not often you see this spark, this legacy in motion. Toronto is lucky to have her. Catch her up next on Wall of Chefs on Food Network Canada, Mondays at 10pm.

Interview may be edited for clarity and length. All photos by Libby Roach.

Next up in the Ladies First series, we speak with Chef Rosie Keshishian, who fled Syria and came to Canada and rose to acclaim as Chef de Cuisine at Babel.