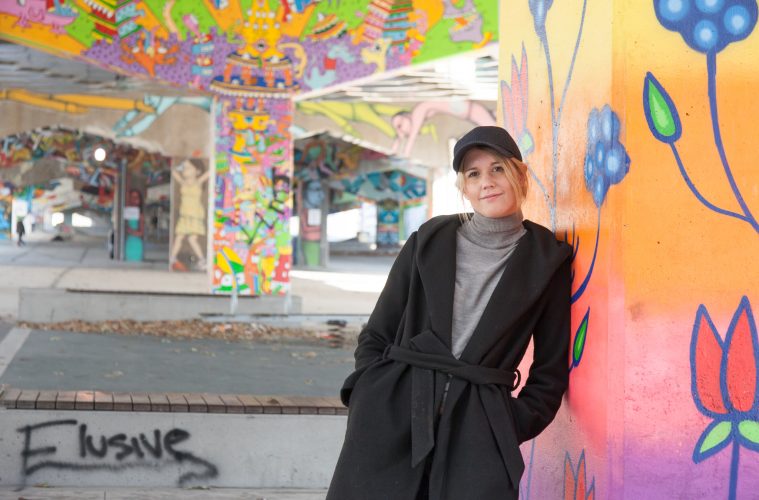 Comeback Snacks is more than just a catchy name, or a gimmicky faux feel-good salty snack. If you were to ask founder Emily O’Brien, she would describe how her whole business plan came together as a ‘cautionary tale’ or at the very least, a wake-up call of epic proportions.

Emily is no stranger to danger. And while her youthful looks and blonde locks may be in direct contrast to her remarkable story, Emily is careful to point out that she’s merely a statistic of the justice system. “This is a huge issue, for a lot of people. It punishes poverty and vulnerability; it’s not going to effect the cartels. By sharing my story, I want people to know the warning signs,” explains Emily. A graduate of International Development from University of Guelph, Emily spent a few years globe-trotting after completing her degree, exploring far off locales like Indonesia working as an unpaid intern for non-profits. Typical to the life of any twenty-something-er, Emily returned to Toronto and sought to begin her career with renewed vigour and a passion for putting her degree to good use.

“I knew I wanted to be an entrepreneur. I had worked in sales and marketing (Loblaws, Blackberry). I’ve always been very curious, and obviously that’s what got me into trouble. That’s how I got into drugs. I never did crack or heroin, but I did try ecstasy, mushrooms…and then I found cocaine, and I really liked it. I didn’t just like the high, but I liked being awake. I did my good-girl stuff during the day, and then going out at night, and I was like ‘how do I do both?’ And it went from celebration to medication after my family split up.”

Insisting that her parents’ divorce was no different than the gazillions of other broken families didn’t change the overlying symptom; her heart was broken. Just because she was in her twenties when the marriage dissolved didn’t prepare her to all of sudden deal with it. So, her reliance on drugs and alcohol became her coping method. Emily swiped right and partied, not forming any serious relationships, and was seduced by a coworker into both a physical relationship and a business partnership.

“There was no manipulation, no physical abuse, only kindness, and then 7 months into it he stopped paying me… I would drive an hour away to pick up some cheques and they would all bounce. He would be sorry, and start buying me all these gifts…alarms were going off, but vodka hit the snooze button…”

When payment for services rendered became a guise to take Emily away on a splashy trip somewhere tropical, Emily wasn’t falling for it. So, when he asked her to smuggle drugs home she outright refused. He apologized, and she squashed her inner critic and brushed it off. A week later, Emily boarded a flight for St. Lucia. After a few days lounging by the pool, the honeymoon was over. Ushered into a car, and drove to a stranger’s house, she was then taken shopping for a dress, something that would disguise the bricks of cocaine to be sewn into a pair of leggings she would soon wear home.

“I knew I was going to be bad at this, I was freaking out. I just wanted to go home. He said when we land at Pearson to go to the bathroom and put the drugs into a backpack he was going to carry. But it was too late, after we landed there was no way to make the switch and we were done. I wouldn’t lie to the official. I knew they could tell right away, my eyes were shifty and dodgy, we had no cover story, we weren’t prepared. So, when I got questioned, I didn’t know what to say.”

Reality came crashing down. Over two years of house arrest allowed Emily to get her life in order and explore what her goal was all along: being her own boss. But then the four years in prison came as a complete shock. Emily figured she could just do community service. She had already finished her house arrest, but the legal system was confusing, to say the least, and international drug smuggling is one of the most serious convictions against the criminal code.

“When I went to prison, I knew that I had a good heart and I’m a nice person and I may have done something that bad that day, but I knew that didn’t represent my whole life. That’s when I realized that I could have done things differently, maybe if I addressed my drinking and substance abuse issues earlier, I maybe wouldn’t have been so needy, feeling like I had to be with someone. Alcohol fabricated a connection and altered my brain chemistry.”

Putting her four years to good use, she repaired relationships with relatives, got sober and got to work on herself, reading books on everything from marketing to prison reform to drug trafficking. She didn’t know exactly where to focus her energy until one day, a woman next to her was sprinkling lemon pepper and dill on her popcorn, a food hack necessitated from the lack of decent prison eats. Comeback Snacks was born.

“In prison, there’s a lot of eating disorders and untreated depression. I thought maybe I could create a healthy popcorn business, which is not only better than the other brands, but also provide employment to those who need it.”

By hiring those who need a second chance, Comeback Snacks seeks to set the record straight for employing for those who have been incarcerated. Giving people the opportunity to right your wrong and move on to lead a productive life is integral to her mission. Emily dedicates a good chunk of her time to speaking engagements, mentoring and educating those on everything from the justice system, to substance abuse to being an entrepreneur. She couldn’t be happier with her outreach or reaction she’s received and is excited to work those “pop-opportunites!”

Learn more about Emily and Comeback Snacks through her site and stay tuned for our next inspiring leading lady, we’re talking love and loss with Kristi from Mother Raw.

*interview may have been edited for length or clarity.