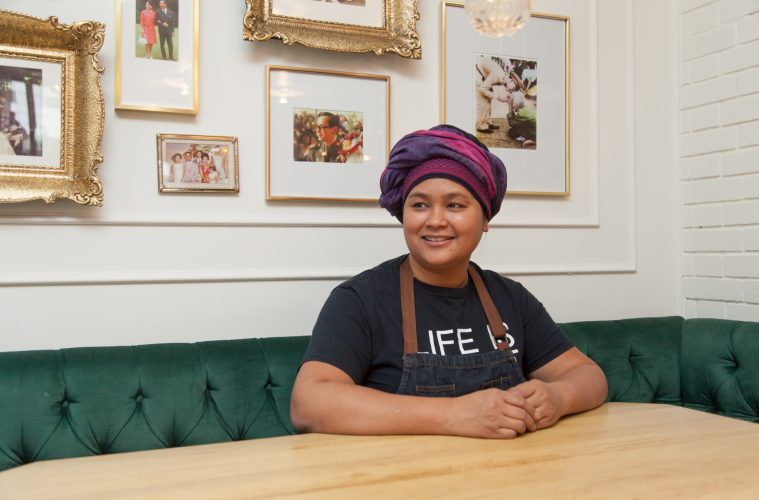 Meeting Chef Nuit Regular for an interview about her recent appearance on Food Network Canada’s Wall of Chefs was my last interview in-person of 2020. No one knew at the time, on that sub-zero February morning, in a few weeks time we’d all be in lockdown, sequestered in our spaces, and a year later, that not much would change.

That one hour interview with Chef Nuit was hard to encapsulate, hence the year it has taken to put words down that would do it justice. Her spirit and her absolute dedication to cooking were completely transparent and enthralling. Nuit is one of those super modest people you meet and feel instantly connected to, someone who’s subtle story-telling stirs something inside you. Every word felt like a hug, preserved forever in my tiny recording device.

Joined by her husband and business partner Jeff at her Adelaide Street outpost Kiin, the fanciest iteration of her empire, and we sat at velvet banquette as she poured us all tea. Before I could really formulate my first question she’d already begun quickly disarming me and recounting how this whole restaurant group, cookbook launch and national TV appearances had come about.

Nuit came to Toronto in 2006 from Thailand, where she was working as a nurse. After five long years in a committed long-distance relationship with Jeff, she left her home and transferred to Toronto and continued her nursing path. But her future parents-in-law owned a building on Parliament by Dundas and were interested in adding a restaurant concept to the build-out. Nuit was studying nursing at the time but was keen to help out. Sukothai was born.

It may have been born, but it was a baby, and babies are complicated. Babies are picky, fussy and keep you up at night, and so do new restaurants. Authentic Thai food in Toronto back in the mid-’00s was scarce, with Bangkok Garden and Golden Thai celebrated as standouts. You might have also found Pad Thai on a pub menu but there wasn’t a huge appetite back when the first Sukothai opened. Distinguishing her flavours of authenticity and tradition were key components to her dishes, which proved so unfamiliar to her guests in the early stages that the restaurant almost didn’t survive.

Compounded by the fact that she was completely unsupported by her Step-Father back home, who refused to speak to her for years lamenting she had tossed away a career in nursing for not-a-real-job, Nuit was steadfast and stubborn, importing expensive ingredients from Thailand to serve to a scant 5-10 customers a day. It was unsustainable and she was feeling uninspired.

One particular customer rang her up after picking up a takeout order and told her she didn’t know how to cook Pad Thai, and peppered her with questions on why she didn’t use ketchup in the sauce. It was spirit-crushing for Chef Nuit, but she stuck to her guns.

“I needed to stay true to myself and the way I want to present my food because it’s important the way I grew up and learned how to cook and I didn’t want to be ashamed of who I am.

I didn’t go to cooking school. Learning is a different form, you can pick it up, I could go to the market with my mom, look at a store, and I would stand there and watch this man for hours and hours and then when I went to do it by myself, I knew exactly how to do it- I realize the power of the learning process by trusting in it, and repeating it, you can memorize it, and how he cut the dough or folded the dough, it was so clear to me. The market is my school of learning.”

Keeping to her traditions, sourcing ingredients and not changing a single thing about her recipes is how she created her own success. The old adage of the customer always being right is one I have never agreed with and thankfully neither has Nuit.

Word of mouth finally got the wheels turning and the critics came soon after. Sukothai had made its mark, and Nuit and her brand of Laos and Northern Thai Food had carved out an entire market in Toronto. Waiting for a table was now expected, so it only made sense to expand, with Sabai Sabai, PAI Northern Kitchen, Kiin and marketplaces now part of the brand.

But scaling up at the speed requires the right touch. Nuit was surprised at the lack of women in kitchens and made them her priority to hire first. Women would approach her for a job, with no experience, many new to the country and language. As long as they loved to cook, they were qualified, “I can teach you the way I cook and you can practice and get better, but only if you love it,” Nuit’s secret ingredient was passion and love for food. Every ingredient is cut with care and precision, even small details like the direction of the knife angle has meaning.

“I believe it’s all connected somehow. I tell my team, have you smiled yet? Have you laughed yet? Because it will transfer to your food. People will receive it, trust me, I have experienced it myself and it’s important -it’s not like other ingredients you can add on- it’s true happiness through our hearts that can make a difference.”

Now known as the indisputable Queen of Thai food, Chef Nuit came to the city she now calls home by fate. With her first cookbook on the shelves and a season on Wall of Chefs under her belt, it’s exciting to see what she’s going to do next. Whatever it is, I hope she’s staying put in her adopted home, one she speaks poetically about, “For us, in Toronto, it’s such a diverse city with so many people that have come all over the world, and often times people feel like they have to merge to the culture, to me, you have to be true to who you are, it’s great to bring your culture with you, but you should share it. Be true to who you are and share your culture with this city. There are great colours in our society, and it becomes more colourful and the city blossoms with these colours.”

Follow Chef Nuit Regular, and stay up to date on PAI Northern Thai Kitchen, Kiin, Sabai Sabai, Sukhothai. You can also stock up on goodies for your own Thai pantry too.

Next up in the Ladies First series, we speak to Hayley Bauerlein, who hails from Hamilton, Ontario and documents some of her years of abuse in the restaurant industry.

Interview may be edited for clarity and length. All photos, except cookbook cover by Libby Roach.

Pair like a Pro! Gargoyle Wine Club takes the fuss out of food pairings