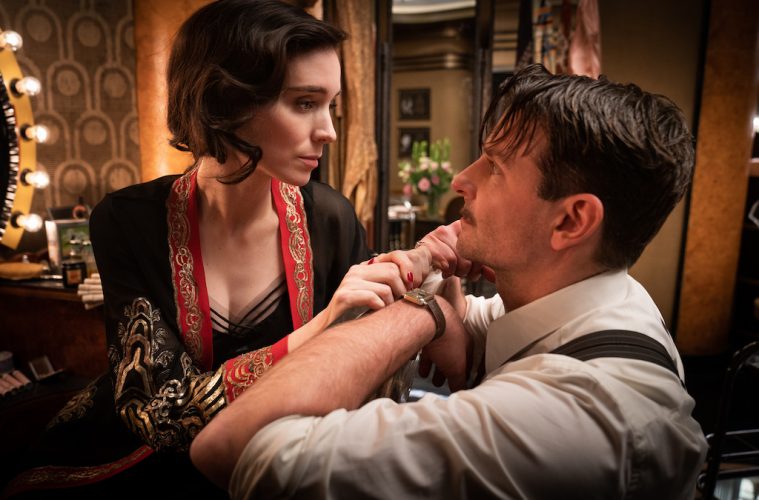 Guillermo del Toro’s ‘Nightmare Alley’ is where seeing is believing

Guillermo del Toro’s adaptation of the classic Nightmare Alley is one that will stick in my mind. Since having the incredible opportunity to hear the filmmaker a few years back, understanding his brilliant mindset has had me dissecting his films ever since. The movies I’ve seen were about outcasts in society and about survival. When he spoke about monsters – he referred to the monsters that weren’t neccessary fictitous ones that lurk in the movies but the dark truths we are faced with on a daily basis. So, many of these real life monsters are far more frightening than any Hollywood creation.

In his latest film, Nightmare Alley, we delve into the world of carnival “seeing is believing” hustling artists in this adaptation of the original film and based on the 1946 novel by William Lindsay Greyham of the same name. And it satisfies the curious mind with many layers.

“I was very interested in a story about destiny and humanity. Stanton Carlisle is a man who is given all the elements to change his life. He has people who believe in him, who love him and trust him. Yet his drive and his own hubris are so strong that they turn him away from that.”– Guillermo del Toro

Stanton “Stan” Carlisle (Bradley Cooper) joins the carnival after running away from some wrong doings. Although it’s not quite as obvious at the beginning what happened, we know it can’t be anything forgivable as he sells his soul to the art of the con.

He stumbles into the fascinating world of oddities –  electric girl, strongest man, smallest man, spider woman, rubber man, and mindreaders. But the gut wrenching cannot look away act is the geek — a caged creature that is  fed live chickens.   “Is he a man or a beast?” — a question that carries more weight once you digest this film. 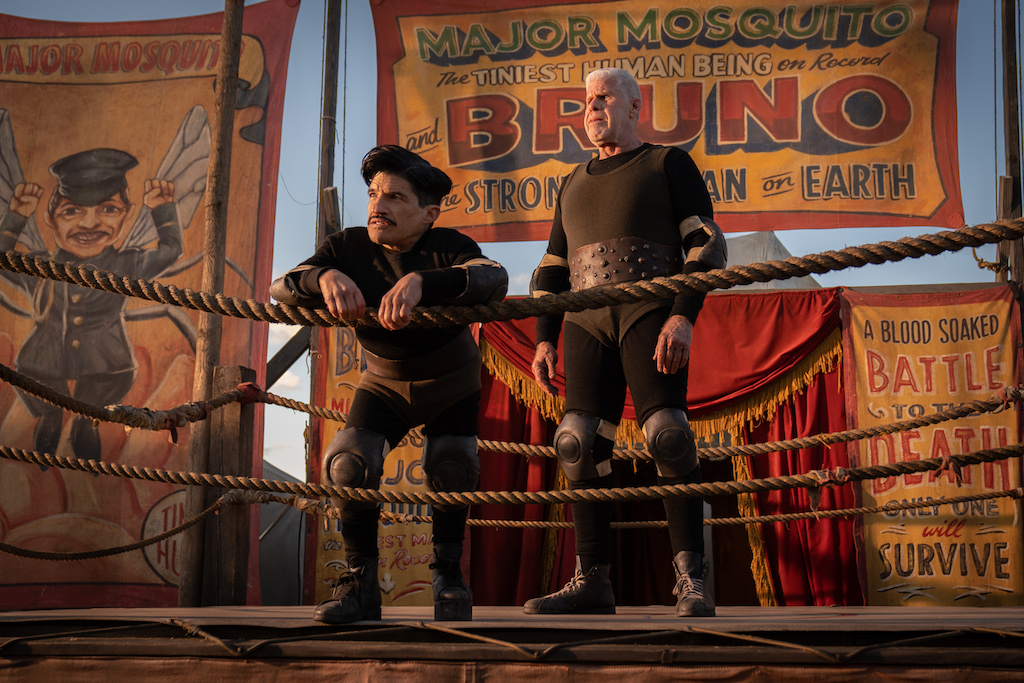 Carnivals, Stan learns quickly, is where the rich will pay anything to see the most obscure. When he meets with show acts Zeena (Toni Collette) and Pete (David Strathairn) he’s fascinated with their mindreading and psychic abilities. Zeena explains  how people would pay to hear the lies they wanted to hear. By learning the tricks of the trade, Stan found his calling. With his charm and charisma he knew he could perform to richer and much grander audiences. However, with the larger payouts came the larger stories and potentially larger falls. “Do not do the spook shows” were warnings given from his closest carnival friends.

Stan comes full circle in meeting his inner demons but does he have regrets? Perhaps not. What led him to this point in his life? All is revealed in the last few minutes of the film.

Rooney Mara plays the virtuous Molly Cahill aka the Electric Girl in the carnival who captures the attention of Stan. Together they leave and she becomes his loyal assistant in his mindreading shows. 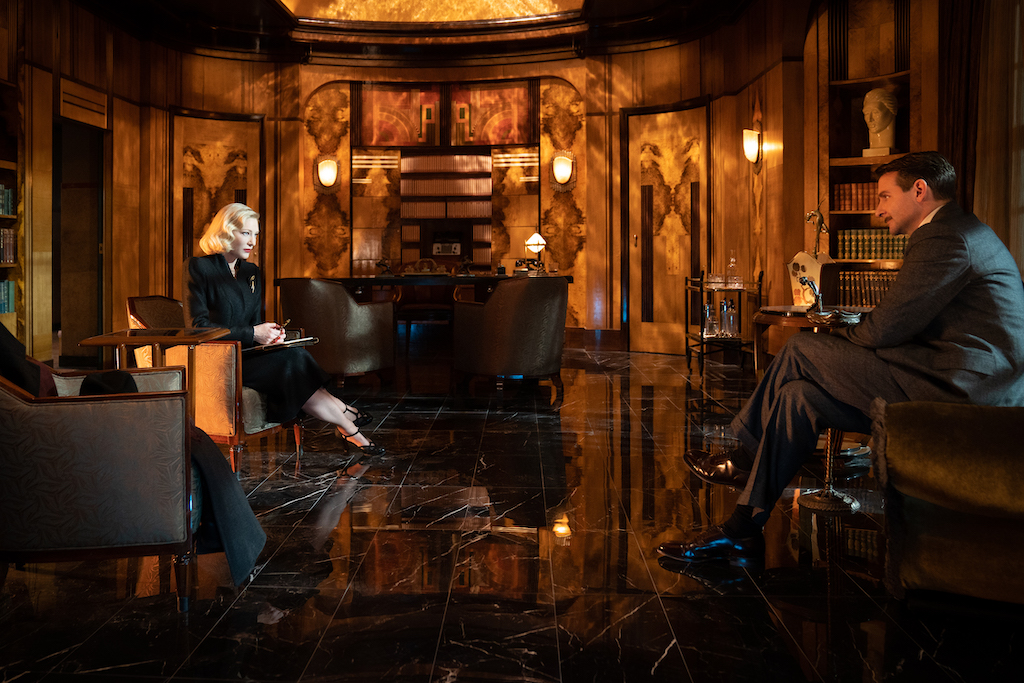 Cate Blanchett’s role as a smouldering Psychologist, Dr. Lilith Ritter – is a strong manipulative character that goes head to head with Stan and her performance is brilliant. You see things coming but then you don’t with her character.

“NIGHTMARE ALLEY is about fear, about greed, and it’s about manipulation. It has all the dark underpinnings of what seems to be a very polite society. The world of the carnival might have some trickery and deceit, but it has the beating heart of a true community. It is the high society in this film that is far more threatening and terrifying,” – Cate Blanchett

If the costume designs remind you of Shape of Water, it’s because del Toro turned to the award winning Luis Seguira once again for Nightmare Alley. What I learned from Shape of Water and listing to Seguira speak about the designs in Toronto was the amount of research done to create the period looks. Same goes for this film. Seguira  is known to recreate the looks to make them look as thought they were brought out of a perfectly preserved closet. His team works with artisans and expert seamsters  and travel to find fabrics that were reflective of the era for most of the costumes in this film.

What was also noticeable and “Easter eggs” for my friend Rhonda’s trained eye, as a watch aficionado and journalist, was the incredible collection of  time pieces. Bradley Cooper’s character was seen with vintage smaller faced men’s watch — authentic and realistic to the era.

What was fun to keep an eye out for was the different locations Nightmare Alley was filmed. We know that del Toro often films in Toronto, Hamilton. We learned that the film included Markham Fairgrounds  for Carnival scenes. The Carlu was the set for the swanky Copacabana club. The R.C. Harris Water Treatment Plant served as an imposing office.

We found this film fascinating discovering a world, and reflection of our world, through Guillermo del Toro’s brilliant storytelling . The production notes best explains his exploration between the murky lines of illusion and reality, desperation and control, success and tragedy. He saw this story as a cautionary tale about the dark side of American capitalism.

Producer, and often collaborator, J. Miles Dale adds, “Ultimately, he tells the story of a man hoisted onto his own karma. One of the film’s most powerful themes is that no man can outrun himself.”