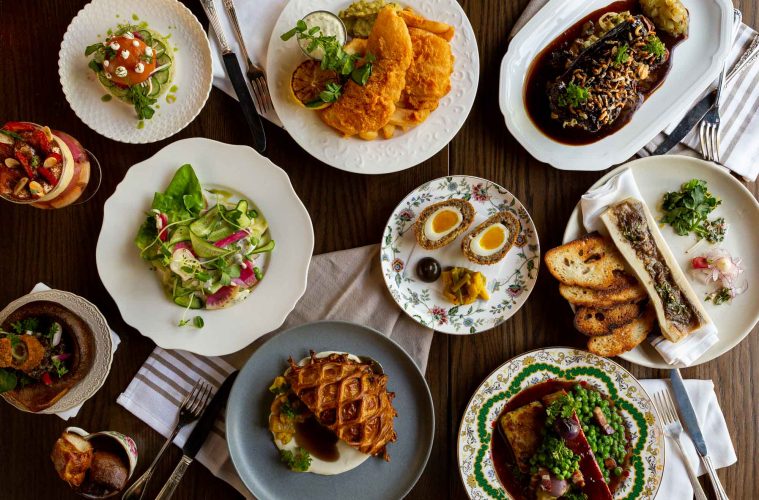 The Rabbit Hole is the first restaurant I’ve reported on in quite literally a decade that I’ve been outright thirsty for. Excitement wouldn’t fit, and eagerness just isn’t enough. It is my personal trifecta of fun; the double-vaxxed Pfizer juice that is trickling in my left deltoid, the jump in temps securing patio season, and the realization of someone very near and dear to me securing their next big goal.

That goal comes by way of your super-talented Chef friend who earned her wings and graduated to Chef de Cuisine. And to cap it off, that talented Chef is also your best friend since your own origin story began, at wait for it, a British Pub where you both worked together in the early aughts. Like an echo chamber of destiny wrapped in a cosy karma blanket, this is her moment, and Toronto is beyond fortunate that this jewel box, formerly the SpeakEasy 21 space, is now safely in Chef Petracca’s charge.

The Oliver & Bonacini group has been preparing Chef Laura for this role, on and off, since that British pub shut down, and Laura bounced from O&B’s Jump, to juggling the demands of her popular band while travelling worldwide with Hunter Valentine. I’ve patiently been waiting for her to return and apparently so has Corporate Executive Chef Anthony Walsh, who quickly tapped her for the Sous Chef role when Leña opened in 2016.

With experience and energy for creating her own menu, one that relives her first cooking job, in a faux-pub experience that won’t see me carrying trays and screaming at hostesses for seating me anyone with a high-chair (it was a different me, okay?) Chef Laura’s effort is on full display on the historic first menu.

“The Rabbit Hole is the kind of restaurant where you can tuck into a traditional British meal like a steak and mushroom pie, or you can take a left turn and enjoy an unexpectedly whimsical dish like beef tartare served inside a Yorkshire pudding, topped with Marmite dressing and a Scotch quail egg,” says Chef Petracca. “I’m really excited to be at the helm of a restaurant that steers a little outside the box and allows you to showcase the fun side of food!”

Drinks will impress as well, with seasoned bar talent Raj Rijhwani weighing in on the bar program. A love-letter to London by way of cocktails, the zippy Ace of Spades ($16) with St-Rémy brandy makes a lasting impression. Pints of course will be on point, I know Laura’s a fan of Boddingtons while I’m team Guinness so let’s hope our alliances continue to bolster and shine at the bar too.

Grinning and brimming with open arms and a pair of kidneys that’s been waiting almost 18 months to celebrate anything, join me on their lush three-level street-facing patio, The Rabbit Hole will begin welcoming guests for outdoor dining at 3:00pm on Friday, June 25th.

All images courtesy Oliver & Bonacini Hospitality’s Pauline Yu, except the image of Chef Julie + Laura. Stay tuned on much, much more on The Rabbit Hole.

Fall for winter- Wonderful wears to keep you warm

Enter for a chance to WIN an iRobot Roomba j7+ vacuum!