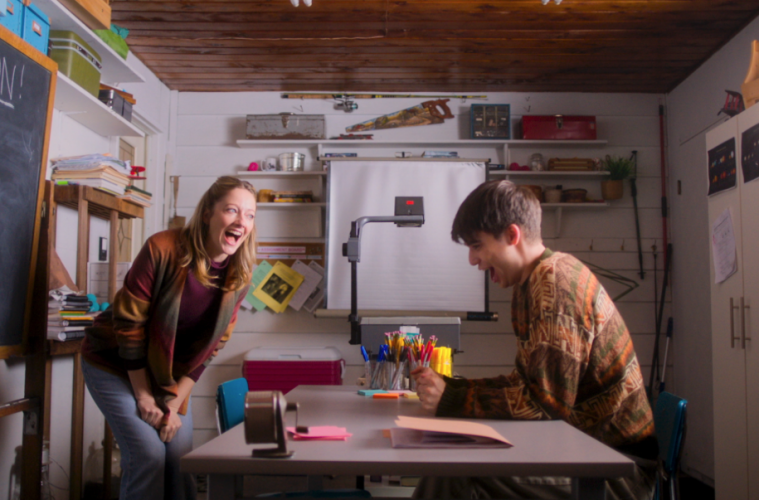 One of the titles featured in the Canada’s Top Ten Film Festival,  ADVENTURES IN PUBLIC SCHOOL (formerly Public Schooled), is a sweet, funny and innocent comedy written by Vancouver’s Kyle Rideout. The film is about a single mother and her home-schooled teenage son in this coming-of-age story — maybe more of an awakening of sorts.

Liam (Daniel Doheny) is a remarkably gifted teen academically with aspirations of attending Cambridge and being the next Stephen Hawking. Mother, Claire (Judy Greer), has become not only his teacher but also his best friend to which delights her to no end. She’s taught him everything he needs to know to ace his high school exams with confidence. Without a doubt he was ready for the exams, which were administered at the nearby high school…until his curiosity was piqued by a pretty one-legged student (Sioban Williams) in the hallways. He then purposely fails the exam and convinces his mother that education at the public high school is needed in order for him to re-do his exams. For the first time in his life, his mother isn’t the only female in his life. But nothing prepared him, or his mother, for this revelation.

Her over protective mommy instincts kick into overdrive when she realizes that her son, although brilliant, has no social skills. She knows she cannot shelter him any longer especially when he’s out of her sight and decides to give him lessons on what she believes will help him navigate the high school hallways. This unravels into the most hilarious situations.

While this all unfolds, a second story line begins to flourish for Claire who has dedicated all her waking moments to her son. A possible courting perhaps? Claire pretty much dismissed that thought of ever being with someone else again and with the most unexpected suitor.

The two lead characters of this film are loveable. We were surprised to learn this was Doheny’s first lead role in a feature film as he embraced all of the innocence and charm — his background is in theatre. Judy Greer has taken the mother’s role and reminds us of just how wrapped up we could get in our children’s lives. Greer character takes a few more steps out of the mommy comfort zone and we absolutely love her!  We get the sense that they had a lot of fun on this film.

ADVENTURES IN PUBLIC SCHOOL’s world premiere charmed audiences at the 2017 Toronto International Film Festival and went on to screen at the Atlantic, Calgary and Vancouver Film Festivals where it has been well received. The film was written and directed by Kyle Rydeout and produced by Josh Epstein through their production company Motion  58. The feature was selected as the Opening Night film for  Canada’s Top Ten Film Festival which will also be travelling across Canada in the next few months. The film will also be coming to select theatres soon. In the meantime, you can find the Canada’s Top Ten Film Festival schedule here tiff.net