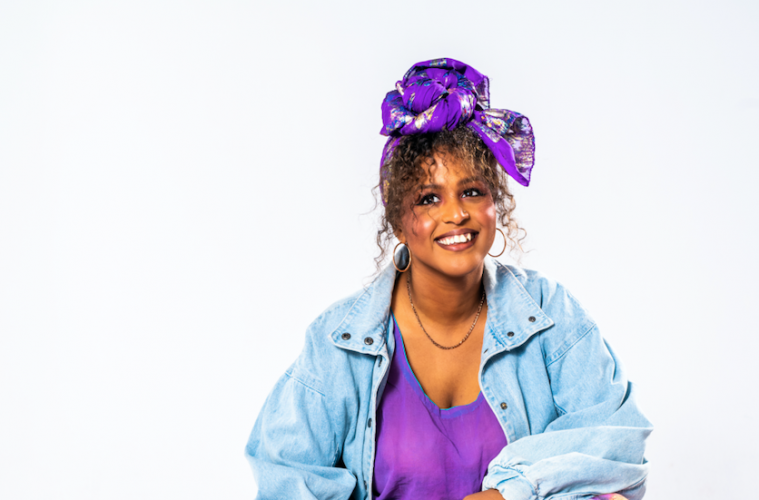 If you haven’t come across her name yet, Fatuma Adar has been touted as a rising star on stage and on screen here in Canada in the last few years.  She was the creative producer for Obsidian Theatre when they produced the award-winning 21 Black Futuresseries which streamed on CBC Gem and recently won 4 Canadian Screen Awards.

Earlier this year she created and starred in a digital production called She’s Not Special (part of Fringe’s Next Stage Festival). Now, she’s getting ready with her original musical piece, Dixon Road. Based on her father’s real life experiences, the story follows a Somali family that emigrates to Toronto’s Dixon Road community in 1991 at the outset of civil war. Dixon Road is on stage June 9 – 19 (previews begin June 3 – date pushed back a few days due to some damage caused by the recent storm) at the High Park Amphitheatre as part of Canadian Stage’s 2022 Dream in High Park programming.

CBC Fund Playback Magazine (Canada’s screen trade) named her one of their “10 To Watch”for the year.  In the write up about the acknowledgement, BIPOC TV & Film founder Nathalie Younglai was quoted saying Adar’s voice is one that “everyone needs to be attention to,” and described her as the “epitome of Black joy and Black girl magic.”  She added, “Her voice is fresh and energizing. I’m just grateful to be in her orbit, where I can be inspired by her boundless creativity.”

How did you decide to share your family’s story in a musical?

Fatuma: I love musicals, it’s my favourite form of storytelling because I think the combination of music and story gives people the opportunity to not only hear our stories but feel it through poetry and melody. Being such a huge fan of musicals I was really excited to explore what a musical from the vantage point of a family like mine and many others would sound like. Plus there aren’t many (read: any) musicals about a Black muslim family, so why not start now?

What did your father think about your idea about telling your family’s story on stage?

Fatuma: I was at first nervous about what he might think, but then he told me about the history of theatre in Somalia. Hearing stories about how folks used to line up at 5am to get tickets to a riwaayad (a Somali theatrical concert) reassured me that what I was doing wasn’t new, I was actually tapping into my roots in a way I didn’t imagine. So he’s pretty excited, he can’t wait to see Somali flags waving on the stage.

There must be many great stories to work into this production, what is your process in creating this show?

Fatuma: I’ve been working on this show for five years and it has changed so much during that time. Each revision I learn more about the story that this piece wants to tell. We’re still in the thick of discovery, but so far there’s the relationship between the father and daughter, the relationship between the entire family sharing the one bedroom Dixon Road apartment, and the larger story about the Somali community who must renegotiate what home looks like. What’s great about a musical is that the ideas that make you want to sing (or rap) is the direction that you follow and a story finds itself through that.

Canadians who are born here may not understand why people from other countries would love to live here. What’s been your experience here?

Fatuma: I feel like we often get the narrative that immigrants should be immensely grateful and happy to live in Canada, and while I know there is some relief to seeking safety in other countries that isn’t the end of their stories. They still have lives back home and family they miss and worry about. I was born in Toronto, but I was inextricably linked to a country on the other side of the world. Canada is filled with diasporic communities who will recognize the journey of a community grappling with its identity in a new place.

What do you wish Canadians to know about Somalia ?

Fatuma: We are more than just a news headline, we are not to be defined as refugees of a failed state, we are funny, dramatic, musical and filled with dreams of our own beyond living somewhere that is safe and accepting of us. This show doesn’t just highlight the struggles, it also highlights the vibrant joy and beauty of this community and I’m grateful that folks get a chance to see that.

Your production will be on stage at High Park, what do you have to consider with this venue?

Fatuma: This is my first professional production so I don’t know how to compare it to indoor theatre, but our incredible director Ray Hogg has presented outdoor theatre before and his vision is a dream. Watching the sun set behind the stage is going to be beautiful and, if Toronto light pollution doesn’t get in the way, the song “Stars in the Sunlight” might be sung literally under the stars. Here’s hoping!

Who has been instrumental in helping you develop this show and how have they helped?

Fatuma: Developing a musical over the course of five years means that there are innumerable souls that have graced this show with their genius that it’d be impossible to list them all. But someone who has been there from the beginning is our incredible Music Supervisor Adam Sakiyama. He creates the most beautiful musical arrangements for this show, his harmonies are *chef’s kiss* and most importantly he never made me feel less than for having an unconventional way of creating music, allowing me to truly express myself. I couldn’t have done this without him.

Who are some of your favourite stage performers?

Fatuma: Other than our AMAZING cast, there are some folks that I will always go see. I just saw Is God Is and Alison Sealy Smith is a legend! I also saw Pipeline at Soulpepper and Chelsea Russel is always so exciting to watch. A stage performer that I recently saw on screen in Revenge of the Black Best Friend (written by Amanda Parris) is Araya Mengesha who has such a strong presence both on stage and digitally.

What has been an important life lesson or advice given to you for your career?

Fatuma: Go at your own pace. For better or worse, theatre takes a long time which means if you don’t like the story you’re telling it’ll be really hard to work on it for as long as you probably will. I’ve experienced ups and downs with telling this story but I managed to always go back to it because I really cared. So take your time, and if it calls you back then you can go ahead and answer that call.

Be sure to check out Dixon Road ! Fatuma tells us with confidence that we’ve never seen a show quite like this before!

Here’s a look at the official trailer and wow is her voice beautiful!…