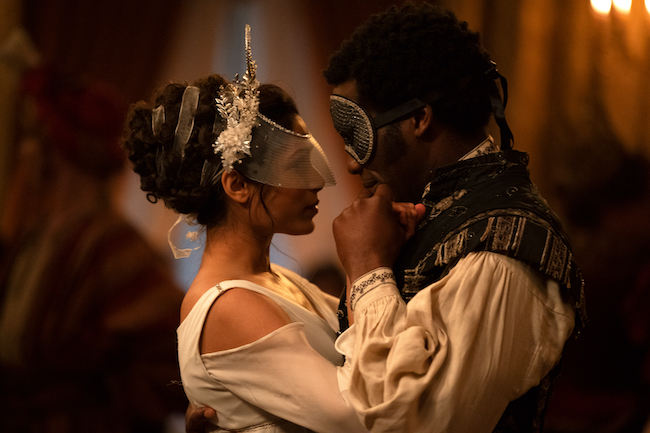 Fans of Bridgerton, rejoice, for it is your time!  A movie, a book and a new Netflix adaptation of Jane Austen are all out this month, and they each capture the wit, the romance and the costume drama of the Regency era, updated for modern tastes and sensibilities.

It is a truth universally acknowledged, that a single man in possession of a good fortune, must be in want of a wife.

In the opening sentence of Jane Austen’s Pride and Prejudice, and one of the most famous first lines of literature, the narrator immediately gets us on side by drawing us into this universal understanding.  At the heart of these recent releases is this question of truth.  Who is telling it?  What really is universal?  How bare can we lay the transactional nature of marriage?

Directed by Emma Holly Jones and written by Suzanne Allain, Mr. Malcolm’s List turns the tables on the single man with the good fortune.  Broody Mr. Malcolm, played by Sope Dirisu, has a list of requirements that his prospective wife must meet, and it is an impossibly lofty list of attributes.  He can never be satisfied, and his list stands in for the constricting rules and regulations by which women could move through the world and, significantly, up the ranks, of Regency England.

However, he has humiliated the wrong prospective wife when Miss Julia Thistlewaite (Zawe Ashton) finds out about his list and that she has failed to meet all of his criteria.  She decides to set him up with a love interest with her own list, and to ensure that he will fall for her and fail her test in turn.  Freida Pinto plays the part to perfection.  Scheming and dancing and many costume changes ensue. 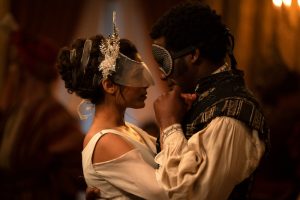 Following in the “colour-conscious” casting footsteps of Bridgerton, the cast is diverse, but the humour is very broad.  Think over the top faux pas and physical comedy.  It is fun, frivolous, and delicious to look at.

Mr. Malcolm’s List is out now in theaters.  Watch the trailer here.

A Lady’s Guide to Fortune Hunting

If Mr. Malcolm’s List turns the tables on the single man, A Lady’s Guide to Fortune Hunting digs deep into the truth of the transactional nature of marriage.

Debut English author Sophie Irwin knocks it out of the park with this whip-smart Regency rom-com.  Kitty Talbot is a lady in search of a fortune, and she throws herself into the London Season in hopes of finding a wealthy husband to save her family of four sisters from ruin.  She is practical to the penny about how large his fortune must be in order to settle the debts her parents left when they died.  There is not an ounce of sentiment in her search. 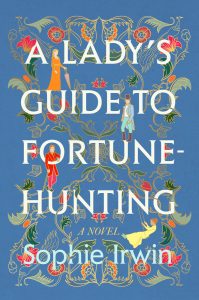 What she doesn’t anticipate is Lord Radcliffe, elder brother of the wealthy Archibald de Lacy, who sees her for the fortune-hunter that she really is.  He is determined to thwart her plans at all costs.  He confronts her early in the novel, and it is the honesty in their exchanges that is so refreshingly new in this take on the marriage plot.  I loved their dialogue, the quick wit of Kitty and her ability to surprise and silence and coerce the help of her antagonist.

This is a book that lays bare the hypocrisies of the rules of how men and women negotiate the marriage market.  It’s fun, often hilarious, pointed in its criticisms and delightfully entertaining.

A Lady’s Guide to Fortune Hunting will be published on July 12.

Finally, coming soon to Netflix is a new adaptation of Jane Austen’s Persuasion.  It looks to be a knowing twist on the adaptations that have come before as well as tapping into current successes in diverse casting and filmography.  In Patricia Rozema’s adaptation of Mansfield Park, the heroine Fanny occasionally breaks the fourth wall by giving the viewer a knowing look.  Truths universally acknowledged and comic moments are underlined by this exchange.  The trailer for Persuasion indicates that there will be much of this going on, as Anne speaks in the first person and addresses the viewer directly.  It has a very Fleabag vibe.

I cannot wait to watch this adaptation.  Richard E Grant as the conceited Walter Elliot is a piece of perfect casting.  I am so looking forward to seeing how this adaptation will help shed new light on an old favourite.

For more great entertainment, check out our Binge Watch list, which includes Season 2 of Bridgerton!