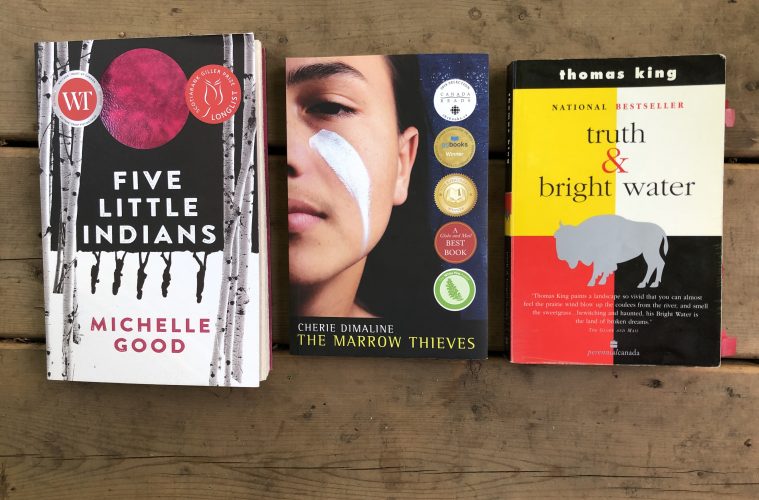 I have been reading up a storm for Indigenous History Month.  I have added to my shelves and gone back to reread old favourites, and I wanted to share my excellent reads.

It is a wonderful time to be a Thomas King fan! Indians on Vacation, published last year, just won the 2021 Stephen Leacock Medal for Humour, his new novel Sufferance was just published in May, and the latest installment of his Thumps DreadfulWater crime series is due out in the fall, along with a graphic novel adaptation of his story “Borders.”

They are all great reads, but the book I particularly want to recommend is Truth and Bright Water, a novel I have reread many times since its publication in 1999. Set on the American-Canadian border, Truth and Bright Water is a coming of age novel that engages with the history of Indigenous peoples in North America. There is a quiet pinch of magic realism in the book. Blink and you’d miss it, but it’s how King makes history haunt the present. A ghostly girl appears at the annual Indian Days celebrations, on the road from Georgia. The narrator, a teen boy named Tecumseh, befriends her, but he’s never quite able to see that she’s a child displaced from her home and now perpetually on the Trail of Tears. Tecumseh stumbles into a summer job working for Monroe Swimmer, “famous Indian artist,” who has just bought and moved into the crumbling church that sits above the town and the reserve. Swimmer, who is inspired by artist Kent Monkman, paints the church away in an act of reclamation, camouflaging it against the landscape. He is famous for his restoration work: he paints Indigenous peoples back into the landscape paintings in all of North America’s biggest museums. He is a gem of a character, and his guerrilla art is the kind of magic you wish could really happen. Soldier, Tecumseh’s constant canine companion, is one of the most memorable dogs in Canadian literature. I sat down just to skim the book before writing this and ended up reading it again, cover to cover, reveling in its power.

The Marrow Thieves by Cherie Dimaline

This is a rollicking page-turner, and this is the book to pick up if you want fast-paced adventure. First published in 2017, it is still at the top of the bestseller list. Set in a post-apocalyptic Canada, in the years after a climate catastrophe, the population suffers from madness brought on by the inability to dream. The Indigenous characters in this book live on the run from Recruiters, who are hunting them for their bone marrow, which they believe will help them recover their lost ability to dream. Dimaline expertly brings the model of residential schools to a harrowing rebirth in a broken world, and its history is revealed in all its violence. The young Indigenous characters on the run band together to share stories of survival. As she said in an interview on CBC, “Who better to survive an apocalypse than a people who already have?” The characters are beautifully drawn, and the plot is expertly tight. Throughout there is a manifest reverence for Story and a belief in the power of the next generation. It’s a book full of hope and power.

Michelle Good is amassing awards this year with her stunning debut. The novel follows five residential school survivors through their years at school and into adulthood. Five narrative threads weave into each other, and the reader rejoices when characters find each other along the way. The pace is gentle, and while the stories are often difficult, I felt entirely safe in Michelle Good’s hands. This is not only because the book is masterfully crafted but also because she holds you safe while she tells you hard things. I could not wait to get back to the book each time I had to put it down. And, much to my delight, it features another very memorable canine companion. (I know there is an audience of dog-lovers here!)

From the Ashes by Jesse Thistle 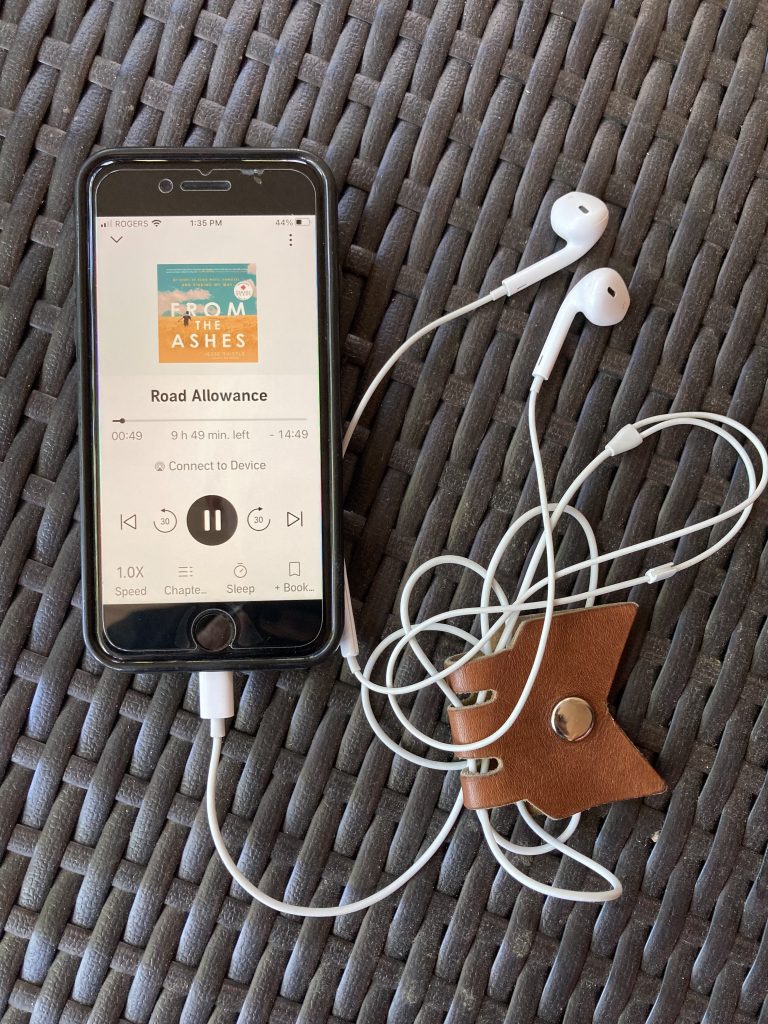 I first heard about this memoir last year on The Next Chapter with Shelagh Rogers. Jesse Thistle absolutely transfixed me with his story about an etiquette course he took while in prison that was taught through the University of Ottawa. He learned how to speak to people while maintaining eye contact, how to eat at a table, how to take care of himself, all things that had fallen to the wayside when survival and addiction were his paramount concerns. Somehow, the power of the sense of achievement in completing this course gave him the strength to begin to wrest the track of his life away from homelessness and addiction. I’m a sucker for a story about the transformative power of education, and knowing that story was in the book helped me to brave its telling. And it was a telling. I listened to the author narrate his own book, and this made it all the more powerful. I was aware throughout what a privilege it was to be able to hear his story, that he survived to tell it, that he believed in himself enough to get the education he missed in his childhood, that he was brave enough to share it. He was among the most marginalized and silenced people in our country, and for many years of his childhood he was mute. I am so grateful that he found and chose to share his words, and grateful, too, for the reminder that small kindnesses can have an enormous impact. Check it out on audible.ca.